Email story of a WW II 101st Airborne trooper resonates with our need for heroes. The story is fictional but the story of those who jumped into Normandy and fought their way through France is definitely not. 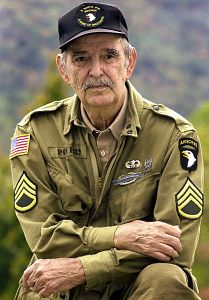 (PHILADELPHIA) – The email story of “Shifty” Powers shows the power of the internet and our search for real heroes. A high school teacher I worked with several years ago emailed me the story today. I thought it worth retelling.hifty Powers, a member of Easy Company’s “Band of Brothers,” did not see himself as a hero. Along with thousands of other young men, he jumped into Normandy in 1944 with the 101st Airborne in the middle of the night. There was no reception committee. He was not a tourist and whether he lived or died was a matter of chance, fate, and in God’s hands.

He was 86 years old when he died of cancer in June 2009. He was 23 in June 1944 when he made his first combat jump. He would live to make several others. He was very, very lucky. Thousands of others were not.

The encounter of Shifty at the Philadelphia airport is fictional. The story of Easy Company, is definitely not.

The story of Easy Company, 2nd Battalion, 506th Parachute Infantry Regiment, 101st Airborne Division, is not fiction. If you haven’t seen Steven Ambrose’s “Band of Brothers,” please do so. I think that Shifty would agree that every one of the “Screaming Eagles” was a hero, especially those who never made it back home.

For those of you who have not received the email, here it is:

“We’ve heard a lot about the big splashy memorial services for the likes of a drugged-up, wacked-out entertainer, Michael Jackson.

I would like to propose a nationwide memorial service for Darrell “Shifty” Powers.

Shifty volunteered for the airborne in WWII and served with Easy Company of the 506th Parachute Infantry Regiment, part of the 101st Airborne Infantry. If you’ve seen Band of Brothers on HBO or the History Channel, you know Shifty… His character appears in all 10 episodes, and Shifty himself is interviewed in several of them.

I met Shifty in the Philadelphia airport several years ago. I didn’t know who he was at the time. I just saw an elderly gentleman having trouble reading his ticket. I offered to help, assured him that he was at the right gate, and noticed the “Screaming Eagle,” the symbol of the 101st Airborne, on his hat.

At that point, again, very humbly, he said “I made the 5 training jumps at Toccoa, and then jumped into Normandy – do you know where Normandy is?”

At this point my heart stopped. I told him “Yes, I know exactly where Normandy is, and I know what D-Day was.” At that point he said “I also made a second jump into Holland, into Arnhem” I was standing with a genuine war hero … and then I realized that it was June, just after the anniversary of D-Day.

I asked Shifty if he was on his way back from France, and he said, “Yes. And it’s real sad because, these days, so few of the guys are left – and those that are, lots of them can’t make the trip.” My heart was in my throat and I didn’t know what to say.

I helped Shifty get onto the plane and then realized he was back in Coach while I was in First Class. I sent the flight attendant back to get him and said that I wanted to switch seats. When Shifty came forward, I got up out of the seat and told him I wanted him to have it, that I’d take his in coach.

He said, “No, son, you enjoy that seat. Just knowing that there are still some who remember what we did and who still care is enough to make an old man very happy.” His eyes were filling up as he said it.

And mine are brimming up now as I write this.

There was no parade.

No big event in Staples Center .

No weeping fans on television.

No moment of silence in the halls of Congress ….

And that’s not right.

Let’s give Shifty his own Memorial Service, online, in our own quiet way. Please forward this email to everyone you know. Especially to the veterans.”

Funny thing when I was in high school in the 1960s, I knew teachers, men like Shifty who were WW II veterans. My history teacher was an 82nd Airborne Division veteran of the European Theatre; others had served in the Navy and Marine Corps. All were fair but tough men. They never talked about the horrors of war. We knew nothing of PTSD. I’m sure that, like Shifty, they never thought of themselves as heroes. In my book they were all heroes.