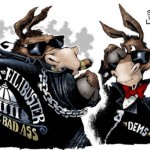 In the United States Senate, doing nothing is protected as a point of historical pride. It is the privilege of a U.S. Senator to do nothing and the do-nothing gang does not want this august legislative body to lose its harrowed privilege.

As Gail Collins puts it this morning: “There is a stupendous lack of real enthusiasm in the Senate for doing anything as dramatic as eliminating the senators’ right to stop things.”

Veterans: Fuck you, it’s the Senate’s right to do nothing. Jobless: Fuck you. No health care: Fuck you. Labor reform: Fuck you. You get the message, people?

“It’s beyond the breaking point,” said Senator Tom Harkin, referring to the U.S. Senate’s obstruction-as-usual, holds on nominations, filibusters, the whole paralysis of a sick legislative body. Harkin will introduce a bill to eliminate the Senate filibuster next week.

Even reformers like Sen. Russ Feingold defend the filibuster. Maybe Feingold and the Senate will have a change a heart, feeling that the problems facing Americans are so serious that a decaying institution’s relics and undemocratic rules must change for the good of the citizens of our republic.

Will Feingold’s GOP opponents this year, Terrence Wall and Dave Westlake [who otherwise do not stand a chance against Feingold and his $ multi-million warchest], challenge Feingold’s on his defense of doing nothing? That would be ironic as the GOP so often employs the filibuster in its attempt to see the Senate do nothing. Even more ironic as the Senate Democrats are the GOP’s allies is preserving this tool of obstruction.

Nothing like arming your opponents in defense of an undemocratic body. Welcome to the Democratic Party. Maybe the Democrats will grow some spine and finally kill the filibuster.

And then maybe the Republican Party will come out in favor of teaching evolution, and empowering the rights of American citizens [even black people] to vote, slash the American empire and slap the military-industrial complex. Right.

-via mal contends
ATTENTION READERS
Due to the nature of independent content, VT cannot guarantee content validity.
We ask you to Read Our Content Policy so a clear comprehension of VT's independent non-censored media is understood and given its proper place in the world of news, opinion and media.