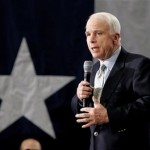 Sure, Senator John McCain (R-AZ) is corrupt, self-important, and narcissistic. Most politicians are.

But few in politics have so successfully hyped the maverick-reformer brand from which reality is at such absolute variance with the cultivated image.

Mainstream political columnists are now figuring out the truth about McCain the Petulant One, the kind of guy whose best friend could be Joe Lieberman.

A quick review: McCain has been dead-wrong (he lied) on major foreign policy areas that he presented to the nation as evidence of his wisdom in his run for president.

To appreciate this crowd’s spotless record of failure, consider its noisiest standard-bearer, John McCain. He made every wrong judgment call that could be made after 9/11. It’s not just that he echoed the Bush administration’s constant innuendos that Iraq collaborated with Al Qaeda’s attack on America. Or that he hyped the faulty W.M.D. evidence to the hysterical extreme of fingering Iraq for the anthrax attacks in Washington. Or that he promised we would win the Iraq war ‘easily.’ Or that he predicted that the Sunnis and the Shiites would ‘probably get along’ in post-Saddam Iraq because there was ‘not a history of clashes‘ between them.

Even rightwingers didn’t trust McCain in ’08 though he embraced the Rev. John ‘Hitler Was God’s Will’ Hagee, brought us the brilliance of Sarah Palin, and has been a champion of Israeli militarism along with the odious Lieberman.

In ‘the 08 campaign George Will blasted McCain writing, “It is arguable that McCain, because of his boiling moralism and bottomless reservoir of certitudes, is not suited to the presidency. (September 23, 2008).”

In the mid-1990s McCain jumped on a first-term Sen. Russ Feingold’s (D-WI) crusade for campaign finance reform because McCain had rightfully been branded as corrupt by the Keating Five scandal.

When the Supreme Court issued its outrageous decision in Citizens Unitedeffectively eviscerating McCain-Feingold—McCain’s signature credential as a reformer—and legalizing corruption and the foreign purchase of American elections, what was McCain’s reaction? Whatever, “I respect their decision.” I bet you do.

Dana Milbank’s column in the Post this weekend well reflects the establishment’s disenchantment with McCain’s bs which veterans and progressive commentators have been blasting for years.

I miss the McCain I sat with on a flight from San Diego to Phoenix back in 1999, when he defended his oft-ridiculed belief that campaign finance was the most important issue in America: because the corrupting influence of money in politics was preventing all other issues — taxes, abortion, you name it — from being solved.

‘Until I draw my last breath, I will fight for it,’ he liked to say back then.

A couple of weeks ago, the Supreme Court issued a rulingthat gutted the McCain Feingold campaign-finance legislation, essentially destroying the cause that had been so dear to McCain. His response: Whatever.

‘I don’t think there’s much that can be done, to tell you the truth,’ he told CBS’s Bob Schieffer. ‘It is what it is,’ he added.

‘Oh, I think so,’ McCain answered, at least for now. ‘The Supreme Court has spoken. I respect their decision.’ So much for that bit about ‘last breath.’

I was an original McCainiac, riding with him in his SUV through the back roads of New Hampshire in ’99. Even as other McCaniacs drifted away, I tried to find excuses for him.

When he endorsed his former rival George W. Bush in 2004 and when he spoke at Jerry Falwell’s Liberty University in 2006, I chalked it up to the exigencies of Republican politics.

I convinced myself that his lurch to the right and his fear mongering in the 2008 presidential campaign was really the work of his Bush-trained handlers.

When he continued on his hard-right course after the election, I figured he was bitter about the loss.

Now, the most generous explanation is that McCain needs to protect his right flank because he’s facing a primary challenge in Arizona from a ‘birther’ Republican, the radio broadcaster and former congressman J.D. Hayworth.

But each time it gets harder to hold on to the hope that there’s still an iconoclast in there somewhere.

The protege has gone the other way, shedding his idiosyncrasies and becoming reflexively anti-government, a conventional conservative.

Last week, it was time for McCain to shed his views on gays in the military. A few years ago, he had said of the ‘don’t ask, don’t tell’ policy: ‘The day that the leadership of the military comes to me and says, ‘Senator, we ought to change the policy,’ then I think we ought to consider seriously changing it.’

At Tuesday’s hearing, Joint Chiefs of Staff Chairman Mike Mullen did just that, saying he thought lifting the ban was the ‘right thing to do.’ Colin Powell later said the same.

But McCain was enraged, hectoring the admiral at the witness table and challenging his integrity.

A week earlier, the topic was the national debt, another traditional McCain issue. He had been a co-sponsor of a bipartisan plan for a debt commission. But just before it came up for a vote, he pulled out and aligned himself against the proposal.

On a full range of issues, McCain has switched to reflexive opposition. His presidential campaign expressed ‘full confidence’ in Fed Chairman Ben Bernanke; McCain voted against confirming Bernanke to another term. During the Bush years, former POW McCain fought against abusive interrogations; last week he scolded the Obama administration for inadequate interrogation of the underwear bomber.

On immigration reform, another signature McCain issue, the senator has lost his tongue. Back in Arizona, McCain’s bombastic buffoon of a primary opponent has been attacking him for his ‘Washington agenda’ and as somebody who has ‘been in Washington too long.’

The John McCain that I miss was a refreshing antidote to that Washington, one of very few in this town who could be the transformational leader we need to get out of this stalemate.

Before writing this column, I reached out to many of McCain’s closest aides from the 2000 campaign to see whether they thought there still was such a man inside McCain. Most of them begged off, some saying they had lost contact with him or become estranged.

I may be the last one who still holds some hope that McCain, long before he draws his last breath, may yet rejoin the fight.

Dana Milbank will be online to chat with readers Monday, Feb. 8 at 1 p.m. ET. Submit your questions and comments before or during the discussion.

– The Horrors of John McCain

– Alexander Cockburn:McCain, What Really Happened When He Was a POW?