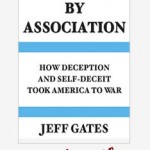 During the 1960 Christmas season, Americans flocked to the theaters to see Exodus, a 3-1/2 hour epic film featuring handsome freedom fighters and a riveting romance amidst the heroic triumph of Jewish Destiny over Arab Evil Doers. Set against a Yuletide backdrop of Biblical prophecy, moviegoers marveled as exiled Jews returned to their fabled promised land, a staple of popular culture to which Americans are first exposed as children in “Sunday school.”

Many moviegoers failed to realize that Exodus was not fact but fiction. Even now, few Americans realize the storyline was adapted for the screen from a 1958 novel by Leon Uris. The biggest bestseller since Gone with the Wind—a novel set during the Civil War of the 1860s—the film adaptation was directed by Hollywood icon Otto Preminger. The blockbuster’s stars included a young Paul Newman with his leading lady a blond Eva Marie Saint.

An Oscar should have been awarded to Israel and its supporters for portraying this extremist enclave as a legitimate nation-state when, in reality, its founding traces to an alluring storyline. Forty-five years after the release of Exodus, American naiveté was again targeted by Jewish storytellers to induce the U.S. to war in the Middle East—only this time for real.

Then as now, Americans are easily swayed by sympathetic portrayals of an enclave granted nation-state recognition by President Harry Truman, a Christian-Zionist. The Missouri Democrat had famously read the Bible cover-to-cover five times by age 15. Truman was a True Believer in the same way that fundamentalist Christians believe—truly believe—that their Messiah will not return until the “Israelites” recover their ancestral home.

Preying on similar beliefs, Republican George W. Bush, another Christian-Zionist president, was induced with phony intelligence to wage war in Iraq. The false intelligence was traceable to Israelis, pro-Israelis or assets developed for that purpose. That invasion had long been a priority goal of those who believe—truly believe—in their right to an expansionist Greater Israel.

Yet as Shlomo Sand chronicles in The Invention of the Jewish People (2009), the historical evidence is scant either for an exile or an “exodus.” As with the movie, the return of a “Jewish People” to a Jewish homeland is “a conscious ideological composition” meant “to claim a higher cultural lineage” than what can be supported by the facts.

In lieu of the novel-writing skills of Leon Uris, the Zionist narrative featured Biblical archeologists such as William F. Albright who, in the 1920s, traveled to the Holy Land to excavate artifacts that would, as Sand puts it: “reaffirm the Old Testament and thereby the New.”

By interpreting his finds in Christian-Zionist terms, Albright and his colleagues not only unearthed Biblical “facts” that shaped the Sunday school curriculum, they also helped pre-stage the perceived legitimacy of a Jewish people returning from exile to a Jewish homeland. As Sand points out, if there was no exodus, how can there be a return? If there is no “Jewish People,” how can there be a homeland?

Yet these widely held beliefs remain the premise underlying Israel’s expansionist agenda and its rationale for heaping six decades of abuse on Palestinians who have lived there for centuries.

Marshall, the top-ranked U.S. military officer in WWII, was outraged that Clifford put domestic political expedience ahead of U.S. foreign policy interests. Marshall told Truman that he would vote against him if he extended sovereign status to an enclave of Zionist terrorists, religious fanatics and what Albert Einstein and Jewish philosopher Hannah Arendt called “Jewish fascists.” Marshall insisted that State Department personnel never again speak to Clifford.

In March 1948, a Joint Chiefs paper titled “Force Requirements for Palestine” predicted the “Zionist strategy will seek to involve [the U.S.] in a continuously widening and deepening series of operations intended to secure maximum Jewish objectives.” Those objectives included an expansionist agenda for Greater Israel that envisioned the taking of Arab land, ensuring armed clashes in which the U.S. was destined to become embroiled.

Akin to the fictional portrayal in Exodus, those Zionists lobbying Truman assured him they would remain within the initial boundaries. We now know that was a lie. They also promised that the Zionist state would not become what it quickly became: a theocratic and racist enclave—albeit widely marketed by pro-Israeli media as the “only democracy in the Middle East.”

To remove all doubt as to the extremist goals of the Zionist project, the Joint Chiefs assessment added ominously:

“All stages of this program are equally sacred to the fanatical concepts of the Jewish leaders. The program is openly admitted by some leaders, and has been privately admitted to United States officials by responsible leaders of the presently dominant Jewish group–the Jewish Agency.”

Deceit from the Outset

A beguiling combination of Hollywood fiction, manipulated beliefs and outright lies remain at the core of this entangled alliance and the U.S.-Israeli “special relationship.” The deceit deployed to advance the hegemonic goals of the Zionist project remains obscured by an undisclosed media bias reinforced by a widespread pro-Israeli influence in popular culture. As with the 1960 film, the ongoing manipulation of thought and emotion lies at the core of this duplicity a half-century later.

In The Persuasion Explosion (1985), author Art Stevens reports that Exodus was a public relations ploy launched by Edward Gottlieb who sought a novelist to improve Israel’s image in the U.S. The name Uris originates with Yerushalmi, meaning “man of Jerusalem.” The film rights to Exodus were sold in advance of the book’s publication. Translated into dozens of languages, this masterpiece of mental and emotional manipulation quickly became a global phenomenon as it created favorable impressions of Israel.

The rewards are real for those who offer aid and comfort to this trans-generational deceit. When Truman’s campaign train traversed the nation as part of a 1948 whistle-stop tour, grateful Jewish nationalists refueled his campaign coffers with a reported $400,000 in cash ($3.6 million in 2010 dollars). Those funds helped transform his anticipated loss into a victory with support from pro-Israeli editorial boards that—after recognition—boosted Truman’s sagging popularity.

The Creation of Reliable Assets

Clark Clifford was rewarded with his career goal when he emerged as a top-paid Washington lawyer. After proving himself a pliable personality, he remained a reliable asset. During the G.H.W. Bush presidency, his combination of political prominence and perceived credibility provided cover for a massive bank fraud involving the Bank of Credit and Commerce International aided by Roger Altman, his Ashkenazi law partner.

In 2009, Hollywood released an action thriller (The International) starring Clive Owen and featuring a similar storyline involving the International Bank of Business and Credit. Neither Clifford nor Altman had experience in banking when their law firm enabled what prosecutors charged was a global criminal operation.

Media reports described the BCCI scheme as the largest bank fraud in history. This $20 billion transnational operation even featured the requisite Hollywood component: Clifford’s protégé was married to Lynda Carter, the star of Wonder Woman, a 1970s fantasy-adventure television series.

The real fantasy in this long-running geopolitical fraud lies in why U.S. lawmakers continue to befriend and defend a “nation” that has for so long—and so consistently—deceived and betrayed its most loyal ally. As a badly miscast Eva Marie Saint asked in her most memorable line in Exodus: “When will it ever end?”

The greatest wonder will be if, based on facts confirming the depth and duration of this duplicity, those lawmakers urging continued support for Israel are not charged with treason. [See: How the Israel Lobby Took Control of U.S. Foreign Policy.]

To restore its national security, the U.S. must shake off its entangled alliance with this extremist enclave. “Shaking off” is the literal translation of “intifada.” Those who know the true facts behind this trans-generational deception are quickly reaching the conclusion that the recognition of this enclave as a legitimate state was key to this ongoing fraud. Others may be waiting for the movie, American Intifada.