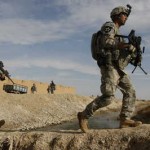 “If “Success” is the word labeled for Operation “Mushtarak” when that outcome means agony, death, disfigurement and disablement for life for mostly young men, who were children just a few short years ago, then how can the definition of winning hearts and minds  be such heinous atrocities, atrocities tied to Karzai, tied to America and her allies, tied to them and remembered for generations. Any disillusioned Afghan will profoundly consider recruitment into insurgency when a foreign invading army, with much better equipment and weaponry, is slaughtering the poorly equipped local tribesmen and their innocent families.”

On February 12th Operation “Mushtarak” meaning “together” in Farsi and Pashtu languages was launched jointly with both NATO and Afghan forces intended “to boost counterinsurgency and eliminate the Taliban embedded with the 80 thousand plus Pashtun inhabitants in Marjah and Nad-Ali districts of Helmand province.”   What were they thinking?

As reported, the green light was approved by the unpopular and vote rigged Afghan President Hamed Karzai who has been telling us for years he is determined to purge corruption and presumably bringing peace and prosperity in Afghanistan.  However, using the word “Mushtarak”, was it because the U.S. and its allies did not use a local Afghan name for their operations in the past nine years that failed miserably? The fact remains, any local or nonlocal naming conventions will not bear fruit when Afghans in their own homeland are treated as second class citizens.

Will a new name change things when the ideas behind it are old ones, ones that have, not only failed in their efforts, but have always made things worse, much worse.

Moreover, the main question remains; will the operation make a difference? Yes it will. It will harden the resolve of the Taliban and their sympathizers who will now become even more doggedly determined to rid the country of foreign forces no matter how long it takes. This is an unwinnable situation and no matter which US General is in charge.

The entire concept behind this operation is not “reality based.”  This is theatre, and nothing more, but many of the players and much of the audience will suffer from this ill-fated production.  I suspect they knew they were writing a tragedy from the beginning.  None of us were fooled.

Practically thinking, engineering such flawed operation akin to what the Russians and British convened during their occupations of Afghanistan which resulted in failures of epochal proportions such that they are a stain on history itself must have escaped the attention of the US planners. 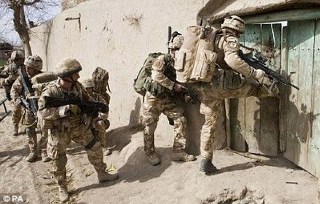 ARE WE REALLY FIGHTING THE TALIBAN?

The people of Afghanistan resist foreign invasions, even if the “foreigner” is from a tribe 20 miles away.  Everyone knows this.  Calling people who fight back “taliban” so that the most powerful nation on earth can use weapons of mass destruction against them is a war crime.

If you break into someone’s home and they are armed, they will shoot you.  The National Rifle Association says this is a basic American right.  Welcome to Afghanistan, we invented this right!

Diverting an operational strategy from a safe and sound strategic path in an effort to reconcile with the militants in this manner is senseless.   This is a futile effort by the U.S., and soon to be proven as an absolutely dysfunctional military approach which will bring about a far deadlier spring time militancy ramification.

Hundreds of Taliban fighters may be killed but in terms of neocolonialist occupation as perceived by the disenchanted Afghans, will only motivate hundreds more to join the cause.  For every Taliban killed, 5 more will show up in weeks, maybe months.  In years you will see 50 more. 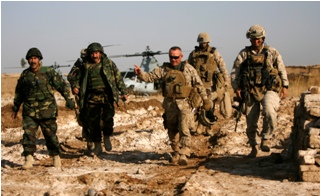 WHEN IS WINNING ACTUALLY LOSING?

If “Success” is the word labeled for Operation “Mushtarak” when that outcome means agony, death, disfigurement and disablement for life for mostly young men, who were children just a few short years ago, then how can the definition of winning hearts and minds be such heinous atrocities, atrocities tied to Karzai, tied to America and her allies, tied to them and remembered for generations.

Any disillusioned Afghan will profoundly consider recruitment into insurgency when a foreign invading army, with much better equipment and weaponry, is slaughtering the poorly equipped local tribesmen and their innocent families. This is only to save face in the name of the policy makers who don’t have the stomach to admit this pointless war is without any justification, and they cannot admit mistakes for fact that they will look bad, and therefore it is okay to resume killing.

In hindsight, Operation “Mushtarak” may be successful as a public relations exercise if reports of US-led forces’ casualties are kept to a minimum, but it will not be a long-term military success where the Taliban are too well adapted to the terrain with their guerilla tactics.

Similarly, it will be an outstanding success just as the same types of operations in Vietnam where huge “search and destroy” operations, with high altitude aerial bombings, infantry units transported by helicopters, as well as ground advances. Subsequently it was claimed the foe was driven away, but only to return later and continue their insurgency with much intense sophistication.

Furthermore, this appears to be another illusory “breakthrough” offensive to the similar failed said offensives of Vietnam War; NATO forces are dropping bombs and peanut butter, with the message, “resistance is futile,” a nation-building strategy with no historical precedent of success. The uncritical Western “hard news” needs to stop questioning merely tactics, and stop disseminating sanitized images. NATO nations need to start questioning whether this entire action is ethically and legally justified.

However, this notion proves that killing men is not going to kill an idea — whether it is good or bad — and the very act of war inspires those ideas that the West is trying to exonerate the world of. However, one can assert that there are alternatives to war.  But it is a political stunt. There are upcoming U.S. senate elections this year, and there is general election in the UK. Of course, Obama and Brown desires are to look like war heroes.

As an Afghan born, I believe, even if the whole world is willing to sustain bankruptcy to transform Afghanistan into a capitalist or communist state, for that matter, it will fail miserably.  With centuries old week central government, tribal imbalance and feud throughout the entire country, and the deep intertwined centuries old complexity, no outsider has yet understood this notion of Afghan tenacity. 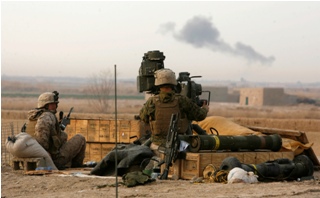 Moreover, no amount of weapons and increasing number of troops are going to bring any success. As long as a single foreign soldier remains in Afghanistan there will be no peace or “success.”  Evidently, in this long term NATO war, if peace was not achievable. Then one must refer to history and be cognoscente of the fact that a non-Muslin army in an Islamic country will never win “hearts and minds” and will always be seen as the aggressive occupier.

The only Afghan operation should be contemplated  is to withdraw all foreign troops immediately, and refer back to the 1830’s second Afghan-Anglo war to define a similar exit strategy, which worked for another 100 plus years until Soviet occupation of Afghanistan in 1979.