Home Economy Is Goldman Sachs Finally to Be Brought Under Control 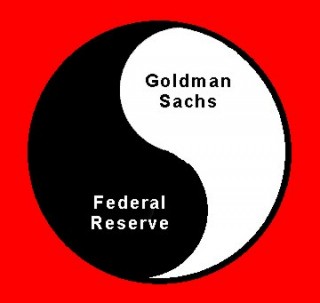 From Yves Smith at Naked Capitalism:

Goldman may have made a fatal mistake. Fatal not to the existence of the firm, but to its standing, reputation, legitimacy, and ultimately, to the thing it covets most, its profits.

Power is most effective when it is used as sparingly as possible. Niall Ferguson, in book  The Cash Nexus, stressed the importance of financing to military success (he argues that England was able to punch above its economic weight due to its superior tax collection apparatus and more highly developed bond markets). The Rothschilds, which among other things financed governments at war, went to some lengths to underplay their influence so as not to threaten their state patrons/clients.

The problem is that the behaviors that contributed to Goldman’s commercial success have over time become unbalanced, and are putting it at odds with governments. It is one thing to abuse the likes of a Jefferson County, as JP Morgan has. As deplorable as that behavior is, they cannot retaliate. It is quite another to mess with bodies that really are, ultimately, bigger than you are.

When I was young and worked briefly at Goldman, the firm was a pig and let even the very junior staffers understand precisely how its pigginess worked so that they would improve upon it when they grew up. For instance, on the deals it lead managed Goldman managed its stock and bond syndicates so as to extract as much as possible, to the disadvantage of other members of the syndicate, who shared the underwriting risk. I was told that Goldman was far more aggressive than other firms in hogging the deal revenues than any other firm on the Street, but could get away with it as a major lead manager. Similarly, on another deal, I walked into the Syndicate department when one of the most powerful partners at Sullivan & Cromwell was on a conference call, instructing the younger members of the department what the right answers to questions would be when the SEC came in asking questions on what they were about to do on this particular transaction, an underwritten call (note: what made Goldman savvier than most firm was that everyone got the official rationale for technically legal but questionable behavior BEFORE they did it, which made it much easier to maintain party line, rather than after the fact, when some conversations and communiques might contain remarks that were decidedly unhelpful. Note that this practice was well established over two decades before e-mails became pervasive).

Anyone who has read Roger Lowenstein’s account of the LTCM crisis, When Genius Failed, will recall how Goldman’s lawyer is assigned to a key negotiating role, and proceeds to cut the transaction in ways that favor Goldman over the other rescue group members. It is almost an uncontrollable reflex, the sort you see a predator take when someone makes the mistake of standing between it and its kill.

Now this aggressiveness was tempered (somewhat) by the posture Goldman called ‘long term greedy’, which basically meant not bleeding customers too much. One of the corporate accounts I worked on was a very reliable fee generator, and the M&A bankers were desperate to talk it out of a deal (on which they would have earned a fee) because they were convinced it was a turkey.

But the Goldman of the new millennium has kept the same relentless focus on the firm’s financial interest, and has become utterly, hopelessly sociopathic, incapable of understanding right versus wrong. The firm’s defense strategies vary among priggish and legalists reports (a Lucas van Pragg speciality), insincere, non-specific apologies (Blankfein), or stony silence. But the truth of how the members of the firm see things comes out again and again, through the many ways the Goldmanites keep maintaining that they really deserve what they make (starting with the heinous Blankfein ‘God’s work’ comment), revealing again and again their inability to see how sharp practices and numerous forms of government support are an integral part of their recent ‘success’.

Every generation seems to have at least one financial firm that abuses its priviledges and power to the point when their pathological behavior brings about their downfall: Drexel, Salomon, Bankers Trust, Enron (Frank Partnoy argues that Enron was a ‘highly profitable derivatives bank’). It is too early to say for sure, but Goldman looks to be at risk of joining their ranks.

Although the Fed is far from an aggressive investigator, the fact that is has taken interest in Goldman’s role in Greece is significant. And the FCIC is also probing Goldman’s too clever by half strategy of using collateralized debt obligations to tee up short bets, since the buyers of the CDO would assume that they were purchasing a legitimate investment, not something that Goldman would have an incentive to design to fail.

From the Financial Times:

The US central bank is looking into Goldman Sachs’s role in arranging contentious derivatives trades for Greece, which helped the country to massage its public finances, Ben Bernanke, chairman of the Federal Reserve, revealed on Thursday.

‘We are looking into a number of questions relating to Goldman Sachs and other companies and their derivatives arrangements with Greece,’ Mr Bernanke said, apparently referring to Greek currency transactions structured by Goldman….

Mr Bernanke said default swaps are ‘properly used as hedging instruments’ and that ‘using these instruments in a way that intentionally destabilises a company or a country is counterproductive’.

The Securities and Exchange Commission is ‘examining potential abuses and destabilising effects related to the use of credit default swaps and other opaque financial products and practices’, said a spokesman.

Separately, Phil Angelides, chairman of the US Financial Crisis Inquiry Commission, told the Financial Times he was concerned about the practice of creating securities and ‘fully betting against them’ – and about Goldman’s role in particular. Goldman declined to comment.

The US comments came as an official in German chancellor Angela Merkel’s ruling Christian Democratic Union party said the G20 nations were discussing whether a ban on the speculative use of CDS was workable.