Home Veterans I thought I was Immortal 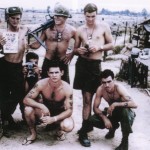 When I worked security in 1973, at the General Hospital Cancer Center waiting room one day, I heard a woman and an elderly man in conversation. I assumed he was her father. He said to her,

“When I was 18, I thought I was immortal.” The old man reminisced.

I had thought the same thing — that I was immortal — but at age 44, November 22, 1991, when my first heart attack arrived with a bang, it suddenly occurred to me that I am not!

I found out that my service in Nam, and the injuries, and exposure to Agent Orange was going to haunt me everyday for the rest of my life.

Today, looking back at the man, I acknowledge the poignant realization that life passes by so very quickly.

I know this from watching Deven, my grandson, who grew in no time from a, cuddly baby into a tall, strong, eleven-year-old who is about to go to his karate class this Saturday. I remember when as a 5 year old, Deven used to say,

I also remember when Deven was younger and I was watching him, and he asked each day,

“Yes, for you, it’s a long time,” all the while I knew that for me, two months is nothing — just a quick passage of time that would end with Devin’s third birthday and would make me long for the days when my grandson was a baby again.

Life moves at a fast pace. I am sure it did for the elderly man in the hospital waiting room. I heard him reminiscing about his younger days.

“When I was the captain of a DC-3 …” he talked about his past, about flying planes and landing planes and airports. Today, this man is elderly. His skin is wrinkled; his posture slumped. He is fragile — and it made me sad to witness an image of aging, knowing this is what happens as time ticks on. Moreover, it made me sad to see him in the hospital wheel chair, having to receive treatment for an illness that is undoubtedly threatening the life that is already passing him by. However, the man fighting for those precious moments in life also inspired me.

He had no sadness about him. Perhaps with age comes a wisdom that the passing of time is an okay process — it is the way life is meant to be.

In addition, mortality comes with life (diseases, heart attacks, cancer or no cancer) — and being reminded of it is not such a bad thing but a wake-up call to appreciate the small moments that pass by so quickly, like when my grandson Deven said to me one day at the house,

On the other hand, when another time when I was baby-sitting him, I made him a peanut butter sandwich and he said,

“Good job, Papa!” Both statements I took to be as high praise indeed!

While I sometimes regret that my grand boy is growing so quickly and I am aging right along with him, I would not trade these moments for anything. When I have thoughts of sadness about mortality, I focus on the gift of life that allows me to watch my grandson grow up, however startling and swift the process may be.

I am thankful today for that glimpse of the man in the waiting room. I am thankful for the life I have had with two children, one grandson, and a great wife, Nanci, marriage since 1966.

~
ATTENTION READERS
Due to the nature of independent content, VT cannot guarantee content validity.
We ask you to Read Our Content Policy so a clear comprehension of VT's independent non-censored media is understood and given its proper place in the world of news, opinion and media.