Home Government Starbucks, Guns, and Healthcare for all 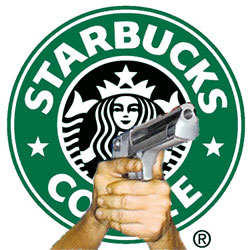 One of America’ greatest business success stories in the last 20 years, namely the internationally famous Coffee chain Starbucks, is sticking to its policy of letting customers carry guns where it’s legal and said it does not want to be put in the middle of a larger gun-control debate.  Opps!  Too late!

The statement stems from recent incidents when gun owners have walked into Starbucks and other businesses to test state laws that allow gun owners to carry weapons openly in public places. Gun control advocates have protested.

Starbucks’ backing of its policy comes ahead of a press conference on Wednesday by The Brady Campaign to Prevent Gun Violence near Seattle’s Pike Place Market, where the first Starbucks cafe opened.

The organization has circulated a petition that has more than 28,000 signatures demanding that Starbucks “offer espresso shots, not gunshots” and declare its coffeehouses “gun-free zones.”

I truly admire this ideolistic effort to ban guns.  In fact, I am very sure that Starbucks leadership agrees with the banning of guns so I am sure they are saying “Geez us, leave us alone and please let us sell coffee”.

I mean Starbucks is NOT in the business of creating public policy.  So leave them alone!  Okay!

My daugther works for them as a “partner”.  I know first hand how great a company Starbucks is.  We need to stop shooting good companies and good people.   Starbucks is a great company and provides great jobs.  And yes they also provide healthcare for their people and believe in covering everyone they can.  We need to help them win not destroy them!

Look, we all know old mid-America  living in the romantic 20th century USA  love their guns.  I mean, who knows which terrorist communist soviet zionist country is going to invade the USA this week right?  We need these gun laws to make sure we can shoot and defend the homeland from the Barbarians, Iranians, Canadians, Soviets, El Salvadorans, Mexicans, Maruders, and the Gauls.

Besides, I like the gun laws.  I like the freedom to know that I can shoot anyone I want whenever I feel like it.  It’s so Dirty Harry or better, it’s so John Wayne.  I love those old movies.

Look, I think we’re all being duped.  This is a conspiracy!

Hey sheeple, think about it .  Carrying a loaded gun in public is a clandestine GOP strategy to make sure all American’s have healthcare.  That’s right I said healthcare!

Hey I saw Eric Kantor the other day and he looked like he was packing. I mean this guy was shooting off his mouth from both sides.  It must be a conspiracy.

You see, I think it’s the plan the GOP never talk about and the Democrats don’t know about.

Yeah, stupid Democrats keep yelling that the GOP plan is to stall on healthcare and keep the status quo!   LOL!  They keep calling them the “PARTY OF NO”  Idiots!  Wrong!

It’s ingenious!   Talk about killing two birds with one stone!

Look, businesses like Starbucks can choose to ban guns from their premises. Starbucks said Tuesday that it complies with local laws in the 43 states that have open-carry weapon laws.

Not to do so, the chain said, would make the chain “require our partners to ask law abiding customers to leave our stores, putting our partners in an unfair and potentially unsafe position.”

It said security measures are in place for any “threatening situation” that might occur in stores.

Starbucks asked both gun enthusiasts and gun-control advocates “to refrain from putting Starbucks or our partners into the middle of this divisive issue.”

I love Starbucks and think they are doing the right thing asking NOT be dragged into this mess.  Its’ not their fault some Americans have their priorities stuck in a 20th century cup of nasty robusta instant coffee.

Look the world keeps going while the USA lives in its  past.  Can the USA really afford to keep going backwards?

We need to go global and compete like Starbucks.   So ban the stupid guns from public use.  No one is invading the USA and this is not the wild west, okay!  Oh and can we get healthcare for all of us in the American tribe and not just the ones you like.   Oh and while we’re at it, when the Census people ask what race you belong to, put down HUMAN RACE and tell them we are all Americans and don’t appreciate being divided into the black, white, hispanic, asian, and arab guy!  Come on man!  This racism thing is so 20th century!

Leave Starbucks Alone, Ban Guns, and Let’s take care of our people, all of them!