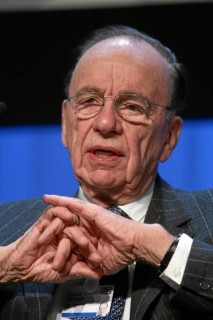 Not satisfied having decimated the news columns at the Wall Street Journal and bringing us Fox “News,” rightwinger Rupert Murdoch is reportedly taking aim at the New York Times [some of the stuff in the “paper of record” is still pretty good as Frank Rich and Paul Krugman are alone worth the price of a hard copy subscription].

Murdoch was known as the “Grand Acquisitor” back in the late 1970s when he bought up media outlet after outlet and media concentration subsequently destroyed the newspaper business, often eradicating local news coverage and dumbing down everything to the point of tribe. If President Obama could do one thing I’d be happy: Oversee the break-up of say the top 20 media conglomerates.

Taking on the Times, Google, and, in a sense, his own children, Rupert Murdoch is not going gently into the night.

On Saturday, January 9, Rupert Murdoch was on his Boeing 737 returning to New York from a business trip to Los Angeles when he learned that the New York Timeshad just posted a long profile of Fox News chief Roger Ailes on its website, one that he knew was going to cause a giant headache.

Earlier that morning, Murdoch’s son-in-law Matthew Freud, the London PR executive who’s married to his daughter Elisabeth, had sent an e-mail to Murdoch’s BlackBerry (Murdoch only recently began using e-mail himself). ‘I’ve given a quote to the New York Times, and you’re probably not going to like it,’ Freud wrote.

The quote lived up to its advance billing—and quite a bit more. “I am by no means alone within the family or the company in being ashamed and sickened by Roger Ailes’s horrendous and sustained disregard of the journalistic standards that News Corporation, its founder and every other global media business aspires to,” Freud, the great-grandson of Sigmund, had told the paper. Certainly there was personal animus in the remark; in the left-of-center London social circles where Freud and Elisabeth operated, Fox is particularly loathed.

But the quote was also a salvo in a battle that had been raging around Murdoch for years. Is Fox News a disreputable cash cow, its reported $700 million in profit something to be tolerated with a held nose? Or is it central to the News Corp. mission? And questions like these lead directly to others: Who is Rupert Murdoch, really? And what does he want now?

As always, these questions do not lend themselves to simple answers. The News Corp. patriarch turns 79 years old on March 11. The younger generation—Prudence, 51; Elisabeth, 41; Lachlan, 38; James, 37—is no longer that young. Three of its members are accomplished businesspeople in their own right. And they, along with senior News Corp. executives, have been working toward the day when Rupert is no longer making the decisions. They are trying to shape and define his legacy, sometimes editing out parts, like Roger Ailesand Fox News, that offend their sensibilities, while trying to position the company for a future that looks very different from the present. But the problem withthese efforts is that Rupert Murdoch is not going anywhere. If anything, he’s been more activethan ever, raging at his adversaries withthe vigor of a man half his age. Over the last several months, he’s been waging a very public war with Google, trying to bend the freewheeling web according to his own rules. He successfully fought Time Warner to get the cable giant to cough up millions to broadcast his Fox affiliates. And he’s rebuilding The Wall Street Journal with an eye on destroying the New York Times, one of the most ancient of his enemies.

For Murdoch, these conflicts amount to holy missions. While others may see him as an opportunistic predator, ready to lay waste to whatever falls under his gaze, Murdoch sees himself as a moralist, the enemy of entrenched, arbitrary power. (Indeed, many of his newspaper wars, from the Times of London vs. the Daily Telegraph to the New York Post vs. the Daily News, have been financial debacles for both parties involved.) Google and the Times may be on opposite ends of the media spectrum, but they share an arrogance about their place in the world. And Murdoch, from the beginning, has found purpose in teaching such institutions hard lessons. Many see his pursuit of the Times as an irrational atavism, a figment of his past. Yet if the Times is going to fall, he wants not only to hasten its destruction but also to be there to dance on the rubble.

When Murdoch landed in New York around 2 p.m., he called his chief spokesperson, Teri Everett. A release went out saying that ‘Matthew Freud’s opinions are his own and in no way reflect the views of Rupert Murdoch, who is proud of Roger Ailesand Fox News.’ He spent much of the weekend at his apartment at 834 Fifth Avenue—Laurance Rockefeller’s former triplex, which he and his wife, Wendi, had purchased for $44 million in 2005. All things considered, there was much to be pleased about. 20th Century Fox’s Avatar was on track to earn $2 billion, which would make it the highest-grossing film of all time. He had survived a crippling media recession and was licking his chops at the prospect of launching a good old-fashioned newspaper war. And yet the Freud quote was still gnawing at him. “Here he is at the height of his powers, and all anyone wants to talk about is this one quote. He finds that incredibly frustrating,” a senior News Corp. executive recently recalled.

Murdoch, who depends on Ailes’s profits to fund his unprofitable hobbies (the New York Post, for instance, which has failed to take down the Daily Newsand is said to lose as much as $70 million a year), didn’t want Ailes to do anything rash, like quit. His feelings about Ailes were complicated, but he needs him. (Just as he needs his children, but gets furious at their efforts to usurp control.) And so inside News Corp., Murdoch worked to quell the little family rebellion. On Monday, while Aileswas having lunch with News Corp. chief operating officer Chase Carey in the third-floor executive dining room, Murdoch made an impromptu visit. Both James and Elisabeth sent Ailes e-mails explaining that Freud’s views weren’t their own. Everyone had fallen into line. Rupert Murdoch was still in charge.

Read the rest at From New York Magazine: