Individuals in the upper level of the Pentagon and media polloi are beginning to commit a cardinal sin. They’re blurting the truth – sort of. Adm. Mike Mullen, chairman of the Joint Chiefs of Staff and the military’s senior spin surgeon (his father was a Hollywood publicity agent), says that “Afghans are in
the lead” of the Marjah offensive. But not everybody involved in writing the narrative is willing to tell a lie that big. 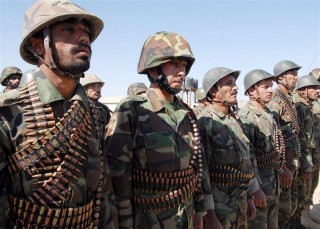 New York Times journalist C.J. Chivers, a former Marine, was among the first mainstream media voices to shoot down claims the Afghan army was leading the operation. In a Feb. 20 article posted from Marjah, Chivers reported that Marines were doing the “heavy lifting” while the Afghans lagged behind. They lagged so far behind, Chivers noted, that the Marines coined a new acronym: WOA (waiting on the Afghans).

“Statements from Kabul have said the Afghan military is planning the missions and leading both the fight and the effort to engage with Afghan civilians caught between the Taliban and the newly arrived troops,” Chivers wrote. “But that assertion conflicts with what is visible in the field. In every engagement between the Taliban and one front-line American Marine unit, the operation has been led in almost every significant sense by American officers and troops.”

In response to truth-outs like Chivers’, unnamed “senior military officials” tell us via NPR that the U.S. definition of “in the lead” means the Afghans are “planning the operation” and are “sitting down with Afghan elders in mosques or in meetings known as shuras.”

If the Afghans are sitting down with elders in mosques, it’s because U.S. planners told them to go find another babysitter. Planning a military operation like the Marjah madness involves a lot of things; talking to old civilians isn’t really one of them.