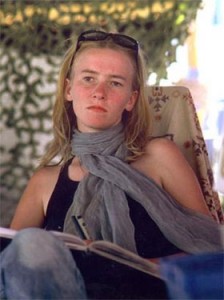 This story is all over the British and Israeli press, but not much in the America, other than the usual suspects: Human rights, peace, justice, civil liberties outlets, and those other anti-American types who don’t understand that war is good, ignorance is strength, chickenhawks are courageous, and brutally murdering a 23-year-old American peace activist with a bulldozer is heroic. Really tough to be a murdering shitbag.

From Jonathan Cook in CounterPunch and Amy Goodman at Democracy Now:

Seven years after Rachel Corrie, a US peace activist, was killed by an Israeli army bulldozer in Gaza, her family was to put the Israeli government in the dock today.

A judge in the northern Israeli city of Haifa was due to be presented with evidence that 23-year-old Corrie was killed unlawfully as she stood in the path of the bulldozer, trying to prevent it from demolishing Palestinian homes in Rafah.

Corrie’s parents, Craig and Cindy, who arrived in Israel on Saturday, said they hoped their civil action would shed new light on their daughter’s killing and finally lead to Israel’s being held responsible for her death. They are also seeking damages that could amount to millions of dollars if the court finds in their favour.

An internal army investigation was closed shortly after Corrie’s death, exonerating both the bulldozer driver and the commanders who oversaw the operation.

Three Britons and one US citizen, who were standing close to Corrie when she was killed, are expected to challenge Israel’s version of events, arguing that the bulldozer driver knew Corrie was there when he ran her over.

The Israeli government had sought to block the activists from entering Israel for the hearing but finally relented three weeks ago, when Britain and the US exerted strong pressure.

The four, like Corrie, belonged to the International Solidarity Movement (ISM), which brings activists to Israel to resist the occupation non-violently alongside Palestinians.

Cindy Corrie, from Olympia, Washington, said: “My family and I are still searching for justice. The brutal death of my daughter should never have happened. We believe the Israeli army must be held accountable for her unlawful killing.”

For many observers, Rachel Corrie’s death in March 2003 rapidly came to symbolise the injustices of Israel’s occupation. Diary entries, many of them written while she was living with Palestinian families, were adapted into a play that has been performed around the world.

However, as one Israeli commentator noted in the liberal daily newspaper Haaretz on the first anniversary of her death: “In Israel, her name has been all but forgotten.”

Corrie’s family hopes the court case will rectify that.

Rachel, a film released last year about her life and the events in Rafah, is due to be screened in Tel Aviv on March 16, on the seventh anniversary of her death and in the midst of the legal proceedings.

Until the court case in Haifa, the Corrie family had run into a series of administrative and legal brick walls in trying to get their daughter’s death independently investigated and to hold those responsible to account.

Ariel Sharon, the Israeli prime minister at the time of Corrie’s death, promised a “thorough, credible and transparent investigation” would be conducted.

But an internal military inquiry clearing the two soldiers operating the bulldozer was widely criticised, including by US officials. Human Rights Watch said it “fell far short of the transparency, impartiality and thoroughness required by international law”.

The army’s report claimed that Corrie had been “hidden from view” behind a mound of earth and that the bulldozer had never come into contact with her. It concluded that “Corrie was struck by dirt and a slab of concrete” as earth slipped on top of her.

The four former ISM activists due to appear in court this week have been told not to comment before giving their testimonies.

But previous witness statements, backed by photographic evidence, have questioned the army’s account. Photographs show Corrie, wearing an orange fluorescent jacket and holding a megaphone, confronting the bulldozer over several hours. They also show the bulldozer’s track marks over Corrie’s body moments after she was crushed.

Tom Dale, a British activist who was next to Corrie when she was killed, wrote two days later that she had climbed on top of a mound of earth as activists nearby shouted at the bulldozer driver to stop.

The bulldozer, he wrote, “pushed Rachel, first beneath the scoop, then beneath the blade, then continued till her body was beneath the cockpit. They waited over her for a few seconds, before reversing. They reversed with the blade pressed down, so it scraped over her body a second time.”

In 2007 a US court denied the Corrie family the right to sue the Caterpillar company, which supplies the Israeli army with the special D-9 bulldozers that killed their daughter and that Israel regularly uses to demolish Palestinian homes.

This week’s hearing is the outcome of a private lawsuit filed by the Corries in March 2005, at the suggestion of the US state department.

Mrs Corrie said: “We hope this trial will also illustrate the need for accountability for thousands of lives lost, or indelibly injured, by the Israeli occupation and bring attention to the assault on non-violent human-rights defenders.”

Mr Corrie added that the family had had to endure “lies and misrepresentations” about the circumstances of their daughter’s death. The family also accused Israel of resorting to procedural delays to drag the case out.

Although Israel has agreed to let in the four ISM witnesses, it has refused to allow Ahmed Abu Nakira, a doctor in Gaza who treated Corrie, to attend the hearing or to be questioned over a video link.

The lawsuit accuses the Israeli government of being responsible either for Corrie’s intentional killing or for the negligent conduct of its soldiers towards unarmed demonstrators.

Israel claims it is not liable because the army’s actions were “acts of war” and because Corrie recklessly endangered herself.

Around the time Corrie was killed, three Britons — Iain Hook, Tom Hurndall and James Millar — were fatally shot by Israeli soldiers. Only in the case of Hurndall, another ISM volunteer who was shot in Rafah a month after Corrie, did an investigation lead to a soldier being found guilty and jailed.

Hussein Abu Hussein, the Corrie family’s lawyer, said they were seeking $324,000 compensation for specific costs related to Corrie’s death, including the funeral, legal expenses and flights. In addition, the family will ask for general compensation for their suffering and Rachel’s loss of earnings, and punitive damages from the state.

In recent weeks the ISM’s office in the West Bank has been raided several times by the Israeli army, with computers and documents taken.

Mr Abu Hussein said he would be arguing in court that the D-9’s manual specifically states that work must not be carried out with civilians nearby, and that the state ignored a judicial decision that a US embassy representative be present at Corrie’s autopsy.

Jonathan Cook is a writer and journalist based in Nazareth, Israel. His latest books are “Israel and the Clash of Civilisations: Iraq, Iran and the Plan to Remake the Middle East” (Pluto Press) and “Disappearing Palestine: Israel’s Experiments in Human Despair” (Zed Books). His website is www.jkcook.net.