Home Veterans Top 10 Veterans News from Around the Country

Find out What’s Inside Today’s Local News for Veterans 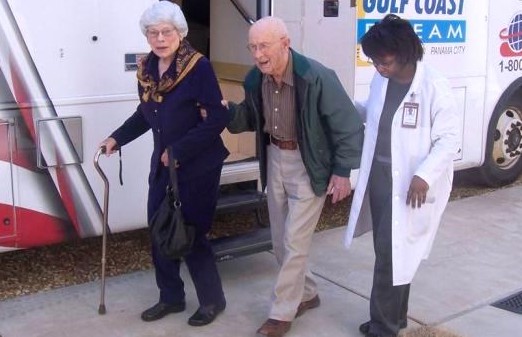 Have You Heard
Jackson VA Conducts Rural Outreach
Recently, the Jackson VA Medical Center sent a Mobile Health Clinic to Greenwood, Miss. where VA staff members treated over 50 Veterans of all ages. Ellis H. Smith (left), a 100-year-old WWII Veteran, was one of them. View the photos

1.      VA NWIHCS To Host Women Veterans Focus Group. The Lincoln (NE) Journal Star (3/17) reports, “Female veterans are invited to join in an evening to learn what the Department of Veterans Affairs health care system is doing to meet their needs. A Women Veterans Focus Group will” take place from 5:30-7:30 p.m. on March 30th, “in the Prairie Room on the second floor of the VA Nebraska-Western Iowa Health Care System Lincoln Division, 600 S. 70th St. The VA NWIHCS is partnering with local county veterans service officers to highlight information about the VA’s Women Veteran Health Care Program.”

2.      VA Sued For Violating Veteran’s Free-Speech Right. The AP (3/17) reports the Department of Veterans Affairs “is being sued for allegedly denying an Army veteran his free-speech right to display an upside down American flag in West Los Angeles.” On Tuesday, the “American Civil Liberties Union of Southern California filed a federal lawsuit…on behalf” of 67-year-old Robert Rosebrock, who “has protested at a VA complex every week since March 2008, saying the VA isn’t using its property to care for veterans.” After noting that the “lawsuit says VA police removed the upside down flag in late February or early March when Rosebrock refused to display it properly,” the AP adds, “VA spokesman Phil Budhan in Washington says there was no immediate comment.”
This story is also covered in a report aired by KABC-TV Los Angeles, CA (3/15, 5:42 p.m. ET), and by the Los Angeles Times (3/17, Pool, 776K), which notes that for “103 Sundays in a row, Rosebrock has led a group of military veterans in a protest of what they claim is the VA’s commercialization of the sprawling Wilshire Boulevard medical center’s grounds.” The Los Angeles Times (3/17, Barboza, 776K) also notes the lawsuit in its “L.A. Now” blog.

3.      Baker: Health Information Exchange Will Be Off For At Least Another Month. In continuing coverage, Bob Brewin, writing his “What’s Brewin'” blog for NextGov (3/17), notes, “The Veterans Affairs Department doesn’t plan to turn on for at least another month a system that exchanges information in veterans’ electronic health records with the Defense Department, Roger Baker, VA’s chief information officer told me.” According to Brewin, VA had “shut down its side of the Bidirectional Health Information Exchange (BHIE) with Defense” earlier this month “because of a software glitch that resulted in VA clinicians getting bum patient information.” Brewin says that while the exchange is shut down, VA “will get patient information from Defense the old fashioned way: by phone and fax.”

4.      Contract Signing Brings VA Clinic In Oregon “Step Closer To Reality.” The South Lincoln County (OR) News (3/17, Card) reports, “A Veterans Affairs Clinic based in Lincoln County took a step closer to reality last week with the signing of an award letter and contract by the Lincoln County Board of Commissioners.” No “opening date has been set” for the clinic, “but VA officials had previously indicated they planned to begin operations within 60 days after the contract was signed.”

5.      New Jersey Committee Approves Fundraising For Purchase Of Veterans Outreach Vehicle. The Gloucester County (NJ) Times (3/17, Barna) reports, “Legislation to allow” the New Jersey Department of Military and Veterans Affairs “to raise outside funds specifically for the purchase of a community outreach vehicle has cleared a state Senate committee.” The bill now “heads to the full Senate for consideration.”

6.      After Receiving Advice From Veterans, US Army Revamps Basic Training Regimen. The AP (3/17, Shafer) reports, “Heeding the “advice of Iraq and Afghanistan combat veterans,” the US Army is revamping its “basic training regimen for the first time in three decades.” Commanders “are dropping 5-mile runs and bayonet drills in favor of zigzag sprints and exercises that hone core muscles. Battlefield sergeants say that is the kind of fitness needed to dodge across alleys, walk patrol with heavy packs and body armor or haul a fellow soldier out of a burning vehicle.”

7.      Hospitals To Test Whether Progesterone Can Help TBI Patients. The San Jose (CA) Mercury News (3/17, Cevallos) reports, “Starting this month, patients rushed to Santa Clara Valley Medical Center” with a traumatic brain injury (TBI), which researchers “say…is now stepping into the limelight as the signature illness of the wars” in Iraq and Afghanistan, “may get a shot of a sex hormone” called progesterone. The “county hospital is joining Stanford, San Francisco General and about a dozen hospitals across the country to test whether progesterone, a hormone pregnant women produce in abundance, can stop the brain from wreaking self-destruction after an accident.”

8. Vietnam Vet’s Lawsuit Over Antipsychotic Drug First To Go To Trial. Bloomberg News (3/17, Feeley, Fisk) reports, “AstraZeneca Plc’s antipsychotic drug Seroquel helped cause a Vietnam veteran to develop diabetes, a lawyer for the man argued in the first” lawsuit “to go to trial over the medicine.” Veteran Ted Baker, who “contends he was taking Seroquel to deal with lingering effects of post-traumatic stress syndrome tied to his military service, is among thousands of people with claims pending in state court in New Jersey alleging that AstraZeneca misled US consumers about the drug’s health risks.”

9.      Homeless Veterans Honored Prior To Burial At Riverside. The Los Angeles Daily News (3/17, Lin, 122K) reports, “Decades after they served their country during the Vietnam War and even World War II, the bodies of five military veterans lay, unclaimed, in the Los Angeles County morgue.” The veterans “had no place to call home” and “no family to bury them,” but on Tuesday, the “homeless vets were honored with a 21-gun salute, taps played by bagpipers and a folded American flag. The funeral at Pierce Brothers Valley Oaks Memorial Park in Westlake Village was part of a two-day service that will culminate today with burial in Riverside National Cemetery, where the Southern California veterans will be saluted by a patriot guard.” The Contra Costa Times (3/17, 186K), a newspaper in Walnut Creek, California, ran the same story.
The Ventura County (CA) Star (3/17, Willer-Allred) notes that the “services and burials” for the homeless veterans “are being coordinated through the Dignity Memorial Homeless Veterans Burial Program, which is available in 25 cities across the country and has provided burial services for more than 600 homeless veterans since the program’s inception in 2000. According to the National Alliance on Homelessness, California has the largest number of homeless people in the nation, and one out of four is a veteran.”

10.    Vietnam Vet Receives Belated Honor. Near the end of “Across The USA News From Every State”, the AP (3/17) notes that in Fredericksburg, Virginia, 69-year-old Phillip O’Donnell “has received a belated Bronze Star for his service in Vietnam.” O’Donnell “was awarded the medal for his meritorious service as a pilot during the war, but he never got it because of an administrative oversight.”