No outrage on corporate television. No accountability. No regrets over 4,400 Americans dead, 30,000-plus wounded, and 100,000s traumatized for life.

Most Americans know that the war was begun and sustained by self-conscious lies. Most don’t really care.

Such is the political culture of the world’s greatest democracy. So wave your flag and shout “Mission Accomplished!”

Ten Appalling Lies We Were Told About Iraq
By Christopher Scheer, AlterNet

“The Iraqi dictator must not be permitted to threaten America and the world with horrible poisons and diseases and gases and atomic weapons.”
— George Bush, Oct. 7, 2002, in a speech in Cincinnati.

There is a small somber box that appears in the New York Times every day. Titled simply “Killed in Iraq,” it lists the names and military affiliations of those who most recently died on tour of duty. Wednesday’s edition listed just one name: Orenthial J. Smith, age 21, of Allendale, South Carolina. 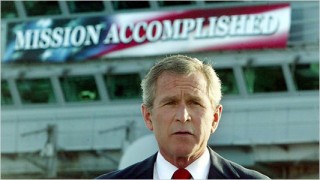 The young, late O.J. Smith was almost certainly named after the legendary running back, Orenthal J. Simpson, before that dashing American hero was charged for a double-murder. Now his namesake has died in far-off Mesopotamia in a noble mission to, as our president put it on March 19, “disarm Iraq, to free its people and to defend the world from grave danger.”

Today, more than three months after Bush’s stirring declaration of war and nearly two months since he declared victory, no chemical, biological or nuclear weapons have been found, nor any documentation of their existence, nor any sign they were deployed in the field.

The mainstream press, after an astonishing two years of cowardice, is belatedly drawing attention to the unconscionable level of administrative deception. They seem surprised to find that when it comes to Iraq, the Bush administration isn’t prone to the occasional lie of expediency but, in fact, almost never told the truth.

What follows are just the most outrageous and significant of the dozens of outright lies uttered by Bush and his top officials over the past year in what amounts to a systematic campaign to scare the bejeezus out of everybody:

LIE #1: “The evidence indicates that Iraq is reconstituting its nuclear weapons program … Iraq has attempted to purchase high-strength aluminum tubes and other equipment needed for gas centrifuges, which are used to enrich uranium for nuclear weapons.” — President Bush, Oct. 7, 2002, in Cincinnati.

FACT: This story, leaked to and breathlessly reported by Judith Miller in the New York Times, has turned out to be complete baloney. Department of Energy officials, who monitor nuclear plants, say the tubes could not be used for enriching uranium. One intelligence analyst, who was part of the tubes investigation, angrily told The New Republic: “You had senior American officials like Condoleezza Rice saying the only use of this aluminum really is uranium centrifuges. She said that on television. And that’s just a lie.”

LIE #2: “The British government has learned that Saddam Hussein recently sought significant quantities of uranium from Africa.” — President Bush, Jan.28, 2003, in the State of the Union address.

FACT: This whopper was based on a document that the White House already knew to be a forgery thanks to the CIA. Sold to Italian intelligence by some hustler, the document carried the signature of an official who had been out of office for 10 years and referenced a constitution that was no longer in effect. The ex-ambassador who the CIA sent to check out the story is pissed: “They knew the Niger story was a flat-out lie,” he told the New Republic, anonymously. “They [the White House] were unpersuasive about aluminum tubes and added this to make their case more strongly.”

FACT: There was and is absolutely zero basis for this statement. CIA reports up through 2002 showed no evidence of an Iraqi nuclear weapons program.

LIE #4: “[The CIA possesses] solid reporting of senior-level contacts between Iraq and al-Qaeda going back a decade.” — CIA Director George Tenet in a written statement released Oct. 7, 2002 and echoed in that evening’s speech by President Bush.

FACT: Intelligence agencies knew of tentative contacts between Saddam and al-Qaeda in the early ’90s, but found no proof of a continuing relationship. In other words, by tweaking language, Tenet and Bush spun the intelligence180 degrees to say exactly the opposite of what it suggested.

LIE #5: “We’ve learned that Iraq has trained al-Qaeda members in bomb-making and poisons and deadly gases … Alliance with terrorists could allow the Iraqi regime to attack America without leaving any fingerprints.” — President Bush, Oct. 7.

FACT: No evidence of this has ever been leaked or produced. Colin Powell told the U.N. this alleged training took place in a camp in northern Iraq. To his great embarrassment, the area he indicated was later revealed to be outside Iraq’s control and patrolled by Allied war planes.

LIE #6: “We have also discovered through intelligence that Iraq has a growing fleet of manned and unmanned aerialvehiclesthat could be used to disperse chemical or biological weapons across broad areas. We are concerned that Iraq is exploring ways of using these UAVs[unmanned aerial vehicles] for missions targeting the United States.” — President Bush, Oct. 7.

LIE #7: “We have seen intelligence over many months that they have chemical and biological weapons, and that they have dispersed them and that they’re weaponized and that, in one case at least, the command and control arrangements have been established.” — President Bush, Feb. 8, 2003, in a national radio address.

FACT: Despite a massive nationwide search by U.S. and British forces, there are no signs, traces or examples of chemical weapons being deployed in the field, or anywhere else during the war.

LIE #8: “Our conservative estimate is that Iraq today has a stockpile of between 100 and 500 tons of chemical weapons agent. That is enough to fill 16,000 battlefield rockets.” — Secretary of State Colin Powell, Feb. 5 2003, in remarks to the UN Security Council.

FACT: Putting aside the glaring fact that not one drop of this massive stockpile has been found, aspreviously reported on AlterNet the United States’ own intelligence reports show that these stocks — if they existed — were well past their use-by date and therefore useless as weapon fodder.

LIE #9: “We know where [Iraq’s WMD] are. They’re in the area around Tikrit and Baghdad and east, west, south, and north somewhat.” — Secretary of Defense Donald Rumsfeld, March 30, 2003, in statements to the press.

FACT: Needless to say, no such weapons were found, not to the east, west, south or north, somewhat or otherwise.

LIE #10: “Yes, we found a biological laboratory in Iraq which the UN prohibited.” — President Bush in remarks in Poland, published internationally June 1, 2003.

FACT: This was reference to the discovery of two modified truck trailers that the CIA claimed were potential mobile biological weapons lab. But British and American experts — including the State Department’s intelligence wing in a report released this week — have since declared this to be untrue. According to the British, and much to Prime Minister Tony Blair’s embarrassment, the trailers are actually exactly what Iraq said they were; facilities to fill weather balloons, sold to them by the British themselves.

So, months after the war, we are once again where we started — with plenty of rhetoric and absolutely no proof of this “grave danger” for which O.J. Smith died. The Bush administration is now scrambling to place the blame for its lies on faulty intelligence, when in fact the intelligence was fine; it was their abuse of it that was “faulty.”

Rather than apologize for leading us to a preemptive war based on impossibly faulty or shamelessly distorted “intelligence” or offering his resignation, our sly madman in the White House is starting to sound more like that other O.J. Like the man who cheerfully played golf while promising to pursue “the real killers,” Bush is now vowing to search for “the true extent of Saddam Hussein’s weapons programs, no matter how long it takes.”

On the terrible day of the 9/11 attacks, five hours after a hijacked plane slammed into the Pentagon, retired Gen. Wesley Clark received a strange call from someone (he didn’t name names) representing the White House position: “I was on CNN, and I got a call at my home saying, ‘You got to say this is connected. This is state-sponsored terrorism. This has to be connected to Saddam Hussein,'” Clark told Meet the Press anchor Tim Russert. “I said, ‘But — I’m willing to say it, but what’s your evidence?’ And I never got any evidence.'”

And neither did we.