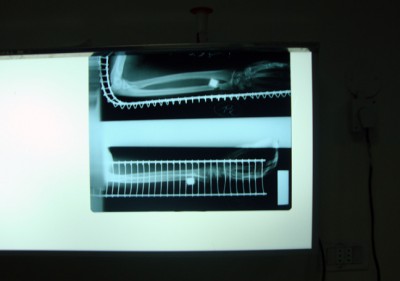 Huwaida Arraf, a human rights worker with the International Solidarity Movement, has been released by Israel after being arrested and illegally held at a make-shift jail in an Israeli settlement town, Halamish.

Arraf’s arrest followed the shooting of fellow human rights worker, Ellen Stark also of the ISM, who was “shot at point blank range (4 meters) with a rubber bullet as she stood with medics … and other internationals,” a communique reads. [An X-ray of Ms. Stark’s arm with the bullet shot into her forearm is at left.]

After the arrest of Arraf, the Israeli Army killed a 16-year-old demonstrator, Mohammed Ibrahim Qaddous, shooting the youth in the head, near the town of Nablus. The deaths bring the number of demonstrators killed by Israel to five in the last week, according to the Guardian.

An e-mail just received from the released Arraf reads verbatim:

Thanks so much for your concern, solidarity and support. I was released last night at around 6:45pm from Neve Tirtze prison in Ramle. Save for minor cuts and bruises, I am OK. I haven’t gotten a chance to see Ellen Stark (the ISM volunteer shot in the arm) yet. I hear she has a broken wrist but is doing OK.

I was arrested on Friday at around noon as I tried to get the Israeli soldiers to stop shooting at people in Nabi Saleh (a small village of about 400 people), especially after ISM volunteer Ellen Stark was shot in the arm. We were in Nabi Saleh for a weekly demonstration by the villagers against the theft of their land. Simultaneous demonstrations were taking place in Jerusalem and in a number of villages throughout the West Bank. In Nabi Saleh, the demonstration took the form of people walking down a hill towards the confiscated land. ‘Stop shooting…a woman has been injured and needs medical attention’ 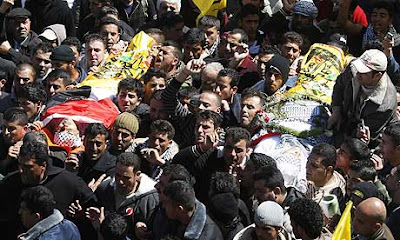 I yelled at the soldiers, making my way back up the hill to the road they stood on (shooting down at us knowing the rugged terrain we were on made it very difficult to move quickly to avoid their barrage of tear gas and bullets). When I got on the road the soldiers turned their guns on me but I just kept talking and walking towards them. ‘We have a woman that has been shot; she needs help. Stop shooting. There is no reason to be shooting at people like this. You are in THEIR village.’ For this I was handcuffed and thrown in a jeep, later accused of: (1) attacking a police officer; (2) cursing at the military and police; (3) obstructing the operations of the military; and (4) being in a closed military zone.

Instead of being taken to a police station, as Israeli citizens and foreigners are supposed to be, I was taken to the illegal settlement of Halamish where I was held for nearly eight hours outside in the cold. Two other Palestinians from Nabi Saleh, Omar who is 23 and Amjad, 22 were also arrested and brought there. The soldiers and border police were particularly abusive to Omar and Amjad, pushing them around, forcing them to stand for hours, handcuffed and blindfolded and every few minutes yelling at them to lift their heads, so they couldn’t rest or fall asleep. When I protested this abuse I was told to ‘shut the f*** up’ and if I didn’t, I would get the same treatment. I responded, ‘I don’t really care, but it’s sad that you feel you have to treat people so inhumanely.’ ‘Shut the f*** up!’

At one point, when Omar couldn’t feel his hands or move his fingers anymore (a combination of tight plastic cuffs and the cold, we were taken into a building supposedly to be checked by a doctor. The same officer who kept telling me to shut up, abusing his power because he can, ordered us to stand facing the wall. I refused this unnecessary measure and show of macho bullying, and was dragged back outside, lifted by my arms, while still cuffed behind my back, and then thrown on the ground. The dehumanization of Palestinians was not only evident amongst the soldiers, but also the Jewish settlers. Since we were held outside in the settlement, we were exposed to settler youth who surrounded and hurled profanities at us.

The ISM lawyer says that my arrest was illegal; that I should have been taken before a judge the same day I was arrested. Israeli citizens and internationals have that right. Palestinians don’t. I was separated from Omar and Amjad at about 2:00 in the morning as after we were interrogated I was taken to a women’s prison in Ramle, and they to the Ofer military prison. In the end I was detained for 31 hours then released. If I had not been released I would have come before a judge last night.

It will likely be at least another week before Omar and Amjad will be allowed to see a judge. At that point they will be accused of violence because they were protesting, unarmed, against the confiscation of their land. The heavily armed soldiers that invaded their village, immediately began shooting tear gas and rubber coated steel bullets; the soldiers that damaged 10 Palestinian homes and injured 25 people in Nabi Saleh aren’t the violent ones. We are. Omar and Amjad are likely to have to pay a fine and/or post a hefty bail to be released, if they are not held for months first.

The police released me right before I was scheduled to come before a judge. This is likely because they had nothing to bring before a judge. I probably should have refused release and challenged their actions in court, but I really didn’t want to make a big deal out of my arrest, when so many other worse things are happening.

That said, so many good things are happening also. Solidarity actions around the world are on the rise, the BDS movement is gaining more support every day, and the spirit of the Palestinian people is high. Israel expects to be able to continue stealing land and resources, subjugating the indigenous people, and using violence to subdue any kind of protest from the colonized and their supporters. We don’t have the weapons Israel has to fight back, but we have our spirit and our voices with which we will fight. Israel should be under no illusion that it can intimidate or break us.

Thanks so much again for your concern and support!