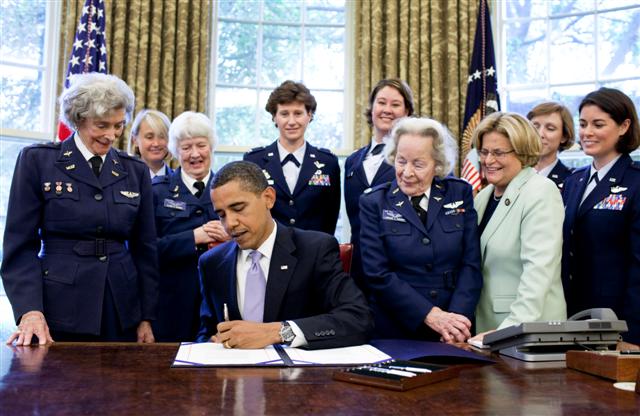 Shortly after the December 7th attack on Pearl Harbor, male pilots became a vital resource in the war effort. When they proved scarce to come by, the Army Air Force caved and decided to train experienced women to fly non-combat missions, allowing more male pilots to be deployed to forward combat positions. Twenty-five thousand women with pilot’s licenses applied to the Army’s Women’s Airforce Service Pilots program, better known today as the WASPs, with only 1,900 accepted. The 1,074 who graduated become the first women ever to fly U.S. military aircraft.

Often resented and under appreciated, the WASP flew in almost every mission except combat, in virtually every aircraft available to the military at the time. Without the pay and entitlements enjoyed by men in the same positions, they logged more than 60 million miles and provided over 50% of troop ferrying service. The attrition and accident rates of the WASP compared favorably to that of their male counterparts, speaking volumes for their abilities, and paving the way for the future of today’s women pilots and astronauts. Their achievements shine brightly as proof that women have always been capable of serving in any aspect of war that they set their minds to. All they need is the opportunity to go out and do it.