Home Government Takeover of US by Israel in its Final Phase

A WARNING FROM AN AMERICAN SAILOR, SURVIVOR OF THE USS LIBERTY

If you have a TV set in your home, a radio, a computer or read the newspaper, you know now America how Israel treats her only friend and benefactor in the world, the good ole USA.

The Prime Minister of Israel told our Vice president where he could stick his Middle East peace plan a week or so ago. Several days ago this same Prime Minister of Israel then comes to our shores, at our nation’s very White House no doubt and tells the President of the United States the very same thing–“Stick your peace plan where the sun doesn’t shine“–and in person mind you.

This VILE ARROGANT ZIONIST little state has been doing this ever since 1948 to every US President and every US Congress. As bad as this is however, what’s worse is that our leaders just lay back and take it. In whose interests do you think they are serving? It sure isn’t America’s.

America has fed this step child for far too many years. WE made them a nuclear superpower. WE made them rich beyond the wildest dreams of not only the average American, but the average person on planet earth. And how do they show their gratitude for this? They give us the middle finger. Israel has busted America flat broke, stolen our most vital national defense secrets with her thousands of spies.

Our service members are dying on a daily basis fighting two wars for these parasites and now Israel is hoping to expand the present disaster into a trifecta–meaning the US fighting Iran.

AIPAC, ADL run the show here folks no doubt about it, they buy of our congress with money, hookers, little boys, anything congress wants for their vote Israel will provide. Our congress is nothing more than a high-priced whorehouse. They are nothing more than streetwalkers, thieves in the night and killers for hire.

The Chairman of the Joint Chiefs of Staff has warned congress about the danger Israel poses to America’s well being. General Petraeus says Israel is a danger to our troops and our National Security…Is congress listening?  (A warning mysteriously rescinded after the Netanyahu visit to the US)

Hell no. I write this article hoping us–WE THE PEOPLE–will finally stand up and hold the WHORES in congress accountable for our men and women who are dying for the state of Israel.

Israel is already guilty of war crimes against its only friend, the USA, and by that of course I mean the deliberate and pre-meditated MURDER of my shipmates aboard the USS LIBERTY on the high seas. They got caught red handed in the dirty business of cold-blooded murder, and the bought-and-paid for WHORES in congress gave them a pass on murdering America’s sons aboard the USS LIBERTY June 8, 1967 by ordering the remaining crew never to breathe a word about it under penalty of going to jail or “worse”, and we all new what worse meant.

Take just one half hour out of your day and go to USS Liberty Blog and you will learn all you need to know about our so called “ally” Israel. Please go to right side of page to the links section and hit “USS LIBERTY” and you are on your way.

You will see the facts in all their raw ugliness. They–meaning Israel and her paid-for whores in the US government–don’t care about America, neither your little Johnny, nor your little girl Susie nor you or me.

Israel cares only about Israel and it is way past time we start taking care of America. The clock is ticking now, faster than the national debt and if WE THE PEOPLE don’t act soon to take our country back from these vampires America will be gone as the greatest nation on earth.

I sure don’t like Israel telling me to stick it where the sun never shines how about you? God help us!!

Friends of the USS LIBERTY, 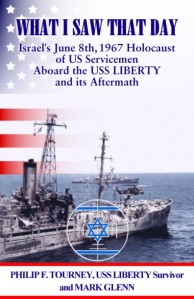 At long last, the book “What I Saw That Day…Israel’s 1967 Holocaust of American Servicemen Aboard The USS Liberty And Its Aftermath” by USS Liberty Survivor Phil Tourney is finished and available to the public in electronic media format.

To call it an important book may be the greatest understatement of the century, as Phil Tourney’s story literally carries the keys to understanding why America finds itself paralyzed by one tiny nation thousands of miles away.

The electronic media version of “What I Saw That Day…Israel’s 1967 Holocaust of American Servicemen Aboard The USS Liberty And Its Aftermath” by USS Liberty Survivor Phil Tourney can be purchased online for $10.00 by going to The Liberty Hour  and clicking on the donations icon towards the right side of the homepage. The hardcopy version, soon to be made available and the audio version can be had together for $25.00. Those purchasing the electronic media version can use their purchase as credit towards the whole package once available.