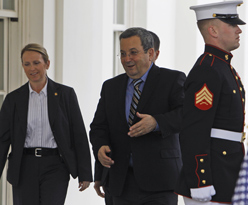 From  Haaretz, via Norman Finkestein

Here’s how Democracy works: We give them U.S.-taxpayer money in the form of “aid.” They use the “aid” to purchase goods from American merchants of death. And the politicians and media babble about whether Netanyahu insulted Biden.

As Prime Minister Benjamin Netanyahu was in Washington this week absorbing the full wrath of the Obama administration, the Pentagon and Israel’s defense establishment were in the process of sealing a large arms deal.According to the deal, Israel will purchase three new Hercules C-130J airplanes. The deal for the three aircrafts, designed by Lockheed Martin, is worth roughly a quarter billion dollars. Each aircraft costs $70 million.

The aircrafts were manufactured specifically for Israeli needs, and include a large number of systems produced by Israel’s defense industry.

The deal will be covered by American foreign assistance funds. The Pentagon will issue a formal announcement on the matter on Thursday evening.

America and Israel have still not reached an agreement regarding the purchase of the Lockheed F-35 war plane. It is still not clear when that deal, which is estimated to be worth more than $3 billion, will finally be sealed and carried out.

If that deal is signed in the near future, Israel will likely receive its first F-35 in 2014.