The arrests of members of a Michigan-based “Christian” militia group should convince doubters that there is good reason to worry about right-wing, anti-government extremism — and potential violence — in the Age of Obama. 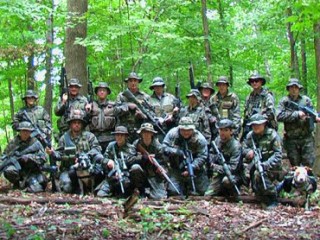 I put the word Christian in quotes because anyone who plots to assassinate law enforcement officers, as a federal indictment alleges members of the Hutaree militia did, is no follower of Christ. According to federal prosecutors, the Hutaree — the word’s not in my dictionary, but its Web site claims it means “Christian warrior” — are convinced that their enemies include “state and local law enforcement, who are deemed ‘foot soldiers’ of the federal government, federal law enforcement agencies and employees, participants in the ‘New World Order,’ and anyone who does not share in the Hutaree’s beliefs.”

Nine members of the Hutaree were named in the indictment. Eight were arrested during weekend FBI raids in Michigan, Ohio and Indiana; one suspect remains at large. The group’s Web site shows members in camouflage outfits traipsing through woods in “training” exercises. They could be out for an afternoon of paintball, except for the loony rhetoric about “sword and flame” and the page, labeled “Gear,” that links to several gun dealers. Along with numerous weapons offenses, the Hutaree are charged with sedition.

The episode highlights the obvious: For decades now, the most serious threat of domestic terrorism has come from the growing ranks of paranoid, anti-government hate groups that draw their inspiration, vocabulary and anger from the far right.

It is disingenuous for mainstream purveyors of incendiary far-right rhetoric to dismiss groups such as the Hutaree by saying that there are “crazies on both sides.” This simply is not true.