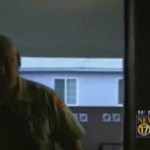 Central California has always been a conservative area, one with thousands of veterans and a very active militia movement.  Individual rights are valued there, rights to privacy, rights to feel safe in your home, safe from illegal search and safe from a police department shown to be, without a doubt, one of the worst in the nation.  We are talking about Kern County, California.  When I received the video today I would never have imagined police would be so absolutely stupid as to have not simply killed the woman filming them.  At least they could have stolen her video camera and smashed it.  Street punks who keep videos of rapes and beatings, later to be played for juries, are of the same ilk.

Note:  Local residents are reporting in that the situation in the video is very much the norm with a political machine running the District Attorney’s office and local District Attorney.  Residents are asking for a federal investigation of corruption in the county.  Reports are that police maintain a climate of tyranny and fear in Kern County.  The wantonly corrupt behavior evidenced on the video should be more than enough to spark some curiosity from federal authorities.  Comments as follows:

“read Pulitzer Prize winner Ed Humes book about Kern County its just the tip of the iceberg…….the local District Attorney has created an evil Empire and yes they commit the crimes on innocent people and than turn around and charge the innocent person-and send them away(no cameras in the cop cars-no cameras in court room-cameras in PRISONS only where they need them many areas where they do the beating and killing away from any video..yet they would brag about all their state of the ART CRIME LAB(run by the DA’s Office)the county is even in charge of the Ambulance Co(that’s so they can cover up the Beatings)”

Citizens groups in California are tracking the situation but have warned us that the Sheriff’s Department investigation is not expected to be anything more than a white wash.  With a video like this, many more groups will keep pressure on Kern until something substantive is done.

For some reason, police in Kern County are absolutely certain they are above the law, any law, the Constitution in particular.  It is certain that they don’t answer to any power, not a county sheriff, no judges, no citizens groups and certainly no a conscience or sense of honor or decency.  The video made me think I was watching something out of The Diary of Anne Frank.

The issue is a simple one, police barge into a woman’s home looking for a “suspect” believed to have committed “battery” on a police officer.  From what the video shows, there don’t seem to be any real police officers in the area, simply uniformed and armed thugs pretending to be police.  When you see utter disregard for law by police, when police ignore some laws, they usually ignore all laws.  With so many police putting their lives on the line every day, so many that deal with endless stress with courtesy and decency, seeing people like this makes me sick.

THE ROBERTS COURT AND THE END OF AMERICAN FREEDOMS

You might ask why police believe they don’t need warrants to search homes or simply break in where they wish?  The answer is simple.  We have 5 Supreme Court justices who will vote to back up any power of a police state over the rights of an individual.  This is the Roberts Court.  It has translated its “conservative” ethic and “strict constructionism” into allowing car searches, wire-tapping, torture and now has totally eliminated the rights of any American to feel safe and secure in their homes.

WHO CAN DEFEND AMERICA AGAINST LOCAL DICTATORS AND CRIMINAL SYNDICATES USING POLICE POWERS?

Low and behold, get ready for this.  The ACLU, yes, the American Civil Liberties Union is the only group that cares enough to protect Americans from having their doors knocked down or their guns seized.  As with Ollie North and Rush Limbaugh, when government takes on an individual and the Constitution is being trampled on, even when those individuals make a living hating the ACLU, it is all that stands between us and a police state.  I wonder if any of those folks in California who love rabble rousing about the ACLU defending “queers” and “perverts” are going to be in front of this womans home to fend off the police?

Another point, of course, is why are groups that talk so much about “conservative values” and “individual rights” willing to sit by and do nothing when our Constitution is trampled on and individual rights are violated, even when the victim is “white folks?”

SOMETHING WE CAN’T SIT BY AND IGNORE

Police officers in Kern County now have a “viral video” that puts them under a spotlight.  The failure to immediately suspend the officers involved and arrest the “bail enforcement officer” involved in this crime is already an issue.  We have yet to hear from a local prosecutor and, certainly no other group, especially no citizens group, veterans, militia or anyone else sworn to defend Constitutional rights has spoken up.  I expect the local police will deal with their own, in their own way.  We have been warned of a cover up but with the national attention this travesty is getting no officer serving in this department will ever be able to live above suspicion or be considered for any other department.

They are going to have to clean their own house.  If handled with honor, our offending officers will have to park their cars a mile away from the station and keep nothing they value in a locker.  Police have always had a way of dealing with misfits and “dirty cops,” in good departments anyway.  It is my hope that this is a good department and that the officers there have already isolated the offenders who should now be guarding the county dump on 3rd shift with Wednesday and Thursday off and an end to any overtime.  I know the drill.  From the local press:

17 News discovered a youtube video of Kern County Sheriff’s Deputies and a bail bonds enforcement officer entering a local woman’s home after she told them they couldn’t come in without a warrant and her consent. With the evidence she caught on tape, the law seems to be on her side.

“I don’t need a warrant,” the bondsman said as he appeared to enter on his own into the home from a back door on the youtube video.

There were also sheriff’s deputies at the front door. Deputies and bail bond enforcement officials have different laws but a local bail bondsman not affiliate with this case said what happened in this case was against the law.

“If you see the person go in, you can go in,” Glenn Pierce, the owner of Gotta Go Bail Bonds said. “But you just can’t go in randomly.”

The woman who lived at the home told 17 News her name is Star. She said she is in hiding because threats were made against her. She also said deputies and the bail bondsman violated her rights by forcing entry into her home after she stated she was the only one there.

Attorney H.A. Sala says based on the video evidence, the Sheriff’s Department could have a lawsuit on its hands because of the way they forced into the home without any knowledge of the wanted person being in the home. “They have to knock, state a purpose, say they have a warrant and give time for the person to surrender,” Sala said.

Authorities were looking for Joseph Baker who was arrested for battery on a peace officer in September. They were also looking for a man named Alan Gjurovich because he co-signed on Baker’s bail bond which Baker forfeited by not showing up in court. Gjurovich is in hiding but spoke to 17 News by phone. He said the sheriff’s department is trying to stop him from filing a lawsuit against the county that could damage county judge and clerks’ credibility.

“They’re trying to scare us out of town and out of the county,” Gjurovich said. “The message I was getting, they were giving us a 48 hour ultimatum–give them what they want on Joe Baker or they will personally come down and arrest me.”

Sheriff Donny Youngblood confirmed the deputies in the video are from the Kern County Sheriff’s Department, but he said he can’t comment because an internal affairs investigation is being launched.