Rohan Coombs, a U.S. Marine Corps veteran who served during the Persian War, sits in immigration detention after spending eight months in jail for a marijuana-related conviction. It wasn’t until the day his sentence was up that he discovered he was not a U.S. citizen and faced deportation. 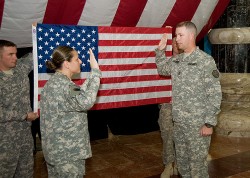 In an interview with Democracy Now!, Coombs explains that his military recruiter told him that his service would make him a U.S. citizen. Coombs’ attorney Craig Shagin points out that soldiers “raise their hand, they swear an allegiance to the United States,” and they thus often believe they are then already citizens, which is why they may fail to take steps to apply for citizenship. Shagin reports that even their commanding officers have been unaware that those under their command were not default U.S. citizens by virtue of their service.

Last week, Prerna wrote about a landmark decision in the case of Padilla vs. Kentucky, in which the Supreme Court ruled that immigrants facing criminal charges have the right to counsel and must be informed that a guilty plea carries the risk of deportation. Jose Padilla was a 40 years legal permanent resident of the United States and a Vietnam war vet who was never told that by entering a guilty plea to a drug-related offense he would face deportation from his home. While this decision will help in some measure to decrease the amount of surprise deportations of veterans and other immigrants, people who served under the American flag deserve more.

As I’ve written before, Banished Veterans is working to stop the deportation of immigrant veterans by having them recognized as “non-citizen nationals,” who don’t enjoy all the rights of citizens but cannot be deported, once they take the military oath of allegiance. Shagin indicates that while serving in uniform, immigrant soldiers are already treated as American nationals by both U.S. and international law, and this should be made official for veterans. Soldiers, he argues, “may lose their life. They may lose their limbs. But one thing they should never lose is their country.” If you agree, you can sign this petition asking Congress to recognize immigrants who serve under the American flag as non-citizen nationals.