During the last few days, President Karzai has thrown the “kitchen sink” at his allies, and his own people. Did the American’s rig the election? Is Karzai joining the Taliban or retiring to the south of France? Some say it is drug use, some say simply stress, depression or Napoleonic delusions, but whatever it is, this kind of behavior is signaling the end of any credibility of Karzai as a leader—with some options for his removal. 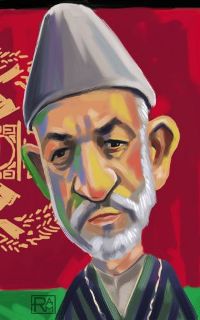 I’m sorry to hear that President Obama has not continued the typical Bush buddy style monthly video conferencing with you. But was it such a harsh reality request to ask for your personal cooperation in shaping up your country at the expense of American blood and billions of tax dollars? And I’m sorry to see that you feel forced into a corner, and must defend yourself —a corner where Iran and the Taliban would love to accommodate your rescue, at least for a little while until they find you of no use to them.

Your recent comical hullabaloo with the Whitehouse has trickled into a larger public domain that has evidently embarrassed all Afghans. It continues to deteriorate the political climate and is fostering a structure of disunity among your fellow Afghans, and within the NATO alliance; who are wholeheartedly trying to restore peace and prosperity, and more importantly, honor and dignity to your country.

And yet, subsequent to all that gobbledygook brouhaha of blaming the West for the vote rigging that you remarkably and markedly engineered, you are still reluctant or incapable of advocating a plausible plan—as none has been implemented in any post Taliban government—for building viable consensus between you, the Afghan people, and Washington.

Why are you wasting this golden opportunity that Afghanistan hasn’t had in decades, and may never have one again?

After all, if this is your personal nightmarish jihad against the Whitehouse, then why are you dragging the innocent Afghan populace—whom you have promised well being for almost a decade—into this political quagmire?

You also should bear in mind, the looming reality at the dawning of a major U.S. offensive to push the Taliban out of Kandahar, that by you not being a reliable partner to anyone (and especially if the counterinsurgency (COIN) strategy against the Taliban should somehow fail), without the presence of US troops, you and your opium-king brothers would be on the first plane to Doha—and the Almighty Allah will then determine your fate.

C’mon Mr. Karzai, you wouldn’t seriously refute that! Would you?

Even our native street level thug politics (Bad-mashi or Pai-loochi in native languages) makes more sense to us; whenever one feels weak, isolated and in danger, he may seek support from a crony whose presence is in close proximity. But in this reality, the crony (the Taliban whom you are now talking about embracing) is a foe, who awhile back murdered your father.

And, per our code of Pashtunwali (an eye for an eye and a tooth for a tooth, retribution), or what is deemed precedence and procedure in our interpretation of the religion of Islam, you are failing to seek justice in the name of your late father. You have dared to dishonor the memory of this Afghan hero and patriot by talk of joining the insidious organization that murdered him.

Sir, where is your core… your Pashtun values? Where is your allegiance to native Afghan family values?

On the contrary, even if you tried to join those cronies, you will undoubtedly be vetted before they would accept you within their prominent ranks. By the way, Hamid Jan! make sure you invite your vice presidents, Mr. Fahim and Mr. Khalili to join you in the journey to Quetta to see the one eyed Mullah,—who you already offered peace talks despite the multimillion dollar bounty on his life—and good luck in the unification of a neo-Taliban alliance. Also, be careful, if you are in their ranks; watch the skies for Joe Biden’s drones that are remotely controlled from Langley.

In addition, your tarnished image within the tribal elders is at such a negative level that they and their elements are not willing to stand with your gang of thieves against the Taliban—or their relatives. This is the reality.

Mr. Karzai, the fact is that nothing has worked with you; the Crawford Cowboy Diplomatic Corps (CCDC) tried to be pals with you, no success. Their successor, Mr. Obama et al. tried to charm you, no success, and now the time has arrived to do some head scratching as to whether Afghanistan can afford to keep you or not.

Well Mr. President, all indications point to the fact that your days as President of Afghanistan are numbered; and it is time for Afghanistan’s young democracy to prove that it is capable of handling the truth.

A constitution that is revisable by a majority of the parliament can have a no-confidence vote to rid the nation of —Ali Baba and the forty thieves—a corrupt Afghan government should be removed by a constitutional majority of MPs in parliament.

If I could have Mr. Obama’s ears; I would suggest to him that before he decides to fight a war on behalf of a corrupt government, that he use whatever authority and world opinion available to him to call upon the world bodies to act exactly as Papa Bush acted towards Manuel Noriega.

What has anyone done to earn the millions now in offshore accounts?
When is there going to be an accounting of all the wrongs that have been afflicted upon the Afghan people?

We can no longer just stand by and watch everything go down the tubes. We cry out when people stand idly by and watch the commission of a crime right in front of them and do nothing.

How can anyone or any nation now stand idly by and witness criminal activity being perpetrated by a corrupt narco-government on its people?

At last, Mr. Karzai, before you went Kamikaze, you should have thought twice and considered that there are alternatives to you and your scatological behavior.