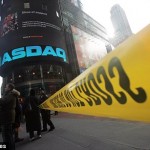 Israelis Blame Taliban Group, One They Have Been Working With For Years

Who would have believed it?  Only days after a warning of an Israeli “false flag” bombing against the US “in the works” a massive car bomb is discovered in Time Square!  Better yet, though no intelligence organization in the world could discover anyone claiming responsibility for this embarrassing failure, SITE Intelligence, a group rumored as the “voice of the Mossad” has placed the blame on the Pakistani Taliban.

This is the same group that has come up with numerous bin Laden “audio” tapes, seemingly, though tiny and nearly totally unstaffed, whenever it is convenient for Israel to point a finger at someone, magically Site Intelligence, run by former IDF soldier Rita Katz, whose father was executed as a spy by Saddam Hussein, makes another “unbelievable” intelligence find.

Site Intelligence finds are not only timely for Israel, when the world is focused on claims they have been planning a ‘dirty bomb’ attack to send the US to war against Iran, but always tend to support mysterious organizations run from the caves of the Afghanistan/Pakistan border region.

After the demise of Iraq, victim of falsified intelligence, now eliminated as an Israeli competitor, all eyes turned to Pakistan, Islam’s only nuclear state.  To establish footholds to destabilize Pakistan, a pro-Indian/Israeli government under President Karzai was installed in Kabul.

After 9 years, no evidence of any terrorist activity involved in 9/11 has been found in Afghanistan.  The great “net” meant to catch Osama bin Laden and armies of Al Qaeda terrorists came up empty.  Instead, we are told from reliable sources that Arab nations friendly to the US released criminals, transporting them to Afghanistan.

These “foreign fighters” actually little more than “extras” in a massive global theatre, kept the small US forces engaged for years, all without any purpose other than to establish that a terrorist organization must have been in Afghanistan because there certainly was one after 2002.

In addition to installing a government that would work directly with Israel and India to organize terrorist attacks on Pakistan, funding to destabilize the oil and gas rich republics of the former Soviet Union had to be raised.

Opium production under the Taliban had been eliminated.  The new government quickly began a resurgence of opium production and heroin processing.  Aided by agents of the Indian RAW and Israeli Mossad, the governments of Kyrgyzstan, Uzbekistan, Turkmenistan quickly fell under the influence of the 65 billion dollar a year Afghanistan drug empire.

Though the drugs may have been from Afghanistan, multiple intelligence agencies from Israel, India, Turkey and others, aided by military contracting firms contracted to the CIA, carried this plan forward.

Continual news stories tying Pakistan to failures to suppress terrorism or rumoring involvement in terrorism themselves flowed onto the world scene through western mainstream media, providing a clear footprint of a classic Mossad operation.

With the demise of Al Qaeda, an unnamed Taliban organization with a website only visible to one person on earth has now declared a mysterious and shadowy war against the United States, in New York City, a city under tight security but one with a very large Israeli/Mossad presence.

This was the same city where the “dancing Israeli’s,” celebrated 9/11 after filming the attacks.  Their advance knowledge of the attacks has been one of the many puzzle pieces tying Israel to 9/11.

However, it wasn’t until the “crotch bomber” of last Christmas that the breadth of Israel’s penetration of US security was demonstrated with Abdulmohammed’s attack tying directly to Tel Aviv.

Anyone who visits New York is aware that security there, especially in Time Square is the highest of anywhere in the world.  The intelligence organizations protecting New York, including the world’s best police force, leave only one organization as capable of this kind of effort, an organization with massive resources in the area, numerous Israeli/American assets and many residual relationships with Gulliani/Kerik/Bush era friends, friends conveniently “asleep at the switch” on 9/11.

Recent intelligence leaks from several agencies have warned of an impending “9/11 style” attack on a high value target in the US or Europe.  Reports indicated that a conventional bomb enhanced with nuclear material would be used.  Such a weapon would indicate sufficient “WMD” credentials in whipping up the necessary war frenzy to get the American public to overlook the history of falsified intelligence that drove them to war in Afghanistan and Iraq.

However, a quickly thrown together “prank” terror attack taking advantage of the environmental disaster in the gulf and the president’s presence there, when coordinated with the press campaign already in motion attempting to smear the Obama administration with the Katrina failures during the Bush presidency, is just too convenient.

With Iranian president Ahmadinejad and Secretary of State Clinton both scheduled to be in New York in the next 24 hours, and recent stories out of Israel trying to tie Iran to the Taliban, the issue of “timing” is a critical one.

The “managed press” aspect of this attack, the phony “web based” confession, the “keeping you safe” scare tactics and the continual drumming of Islamophobia is unmistakable.

This has been confirmed, not only in direct briefings with the Pakistani ISPR and ISI but US military intelligence sources as well, who dispute the number of terrorist trainers, not their presence.

Terrorist groups inside Balochistan, the remote Pakistan province said to be a haven for Mossad attacks against Iran, claim to be headquartered in Israel.  These groups work directly with the Pakistan Taliban and are another indication of this current “stunt” turning back on non-Islamic planners.

ALWAYS THE SAME, “WHO GAINS?”

With Iran taking the propaganda offensive to the United States, a nation increasingly distancing itself from, not only the idea of supporting an Israeli attack on Iran, but Israel herself.  Israel is under pressure to reestablish itself as America’s partner in a long discredited “war on terror” that has been a huge embarrassment to the US.

A “very public” attack like his is a message to President Obama.  “We can go where we want and our control of the press will put the blame on anything we do, on you.”

With over 90% of America’s terror arrests turning out to be innocent bystanders, some tortured for years, untold numbers “disappeared,” Bush era failures have soured public support for hunting terrorist leaders who have increasingly been either captured by Pakistan or have been found to be negotiating with US forces.  The “war on terror” had become an “Israeli franchise,” making billions in increased military aid, some covertly transferred to Israel through “weapons replenishing” and fat military contracts taken from American firms.

The Marines in Afghanistan are using MRAP vehicles built in Israel, a country with nearly one million guest workers while America has over 30 million unemployed and an unused technology and industrial base better equipped for such production.

With the signature of this bombing being so close to that of the “crotch bombing,” an attack with Israeli fingerprints from Nigeria to Yemen to Amsterdam, the “superfast” accusation against a Pakistani group was no surprise.

With New York police discounting the Pakistan connection to the bombing immediately, Fox News has unleashed an attack on the Obama administration in a well orchestrated manner, accusing democrats of “failing to protect the American people.”

With both Site Intelligence and Fox News tied directly to Israel and the signature and timing of this attack showing clear Israeli fingerprints, Fox may be right.

America may be unable to protect itself from a nation still seen by most Americans as a close ally.  No other nation has the capability of such an attack or the influence to orchestrate the news, an act already in motion.

If any finger is pointing anywhere, Fox News is telling us “Israel did it.”