Home Government The People, the Scam, and the Mainstream Media

The People, the Scam, and the Mainstream Media

A reader contacted me last week wanting to know why I’ve become so fixated on what’s going on in the post office. The answer is quite simple. First, since I worked for the postal service for over twenty-seven years of my life, I care about postal workers. They’re a part of my extended family and I have an intimate understanding of the hardships that they have to endure.

But there’s another reason that’s just as important. As a political animal I understand that the postal service is a microcosm of America as a whole, so it’s clear to me that the injustice that postal employees are being forced to endure today is only a prelude to what American workers as a whole will have to face in the days to come – and the reader’s remarks clearly demonstrate why.

The reader went on to say,

“Now any organization with hundreds of thousands of employees is going to experience graft, fraud and so forth on all levels from time to time, but you don’t seem to have made a case for this being a particularly noteworthy problem at the USPS. The organization, which has with the growth of email and competition from FedEx, UPS and even Twitter, become increasingly superfluous in recent years. It must downsize, become vastly more efficient, and employees whether in management or on the line will simply have to be more productive (and in thousands of cases released, as the “product” produced by the USPS is increasingly shunned. This is not some evil fascist government plot conspiring to trod upon the weak. It is reality.”

Due to a thirty-year assault on our educational system and an endless fare of mind-numbing titillation – both fiction and nonfiction – over our airways, this reader, and America, has been conditioned to believe that ‘a little corruption every now and then’ is simply the American way. Well, it’s not the American way, and if we allow ourselves to embrace that philosophy the American middle class, of every race, every creed, and every color, is doomed – and due to the corporate media, we’re headed in that direction as fast as we can go.

For example, we all know that the oil spill in the Gulf is a major catastrophe. At this point the media has made that clear. But the media hasn’t become fixated on this story because it’s an environmental disaster – they’re just covering that angle because it can’t be ignored. There are only three reasons why this story has drawn so much media attention – eleven people were killed, the live video of oil rushing out into the ocean provides compelling video, and the disaster is going to cost a lot of important people a lot of money, trouble, and controversy. That’s it. Informing the people has nothing to do with it.

The fact is, the media is not as interested in informing the public as it is providing revenue-enhancing drama. So the primary reason that we know the Gulf spill is a major disaster is because it’s managed to tear the media’s attention away from what they consider the really important stories, like Tiger Woods’ sex life.

That reflects the new journalistic standard of what’s news worthy. The new standard for ‘news’ is that it must be either titillating, gruesome, have great visuals (the wives of coal miners crying over their dead husbands’ bodies), or that it has a negative impact important people.

The MSM has become voyeurs. They’re peeping Toms, and totally reactive. They no longer have any interest in digging beneath the surface to keep the American people informed, but they become giddy with excitement over the chance to exploit the resulting misery of the very people they’ve failed. Where was the media that should have been investigating the rationale behind the invasion of Iraq? I’ll tell you where they were – they were getting film footage of themselves riding through the desert on tanks – in bed with the very government officials that they should have been investigating. If they’d focused on good journalism instead of self-service, they might have saved the lives of thousands of American troops, and nearly a million Iraqis.

The mainstream media never becomes interested in a story until there’s an explosion – twenty-nine mineworkers trapped in a poisonous coal mine, eleven oil workers vaporized in the Gulf, or when a postal worker snaps from abuse and walks into the post office with an M16 and brings death and destruction to his co-workers. But what’s happened to the families of the twenty-nine mineworkers, eleven oil workers, or victims of postal mayhem since? We’ll never know, because they’ve been relegated to the trash bin of yesterday’s news.

Now the postal service is pushing for a five-day delivery schedule under the pretext of saving on fuel costs. But is the media investigating that contention? Not on your life – the story’s not sexy enough. If they did investigate it they’d find that what the postal service is actually trying to do is dump the consequences of their irresponsible management in the laps of the workers – yet again.

Just because the postal service will only deliver five days a week doesn’t mean that mail won’t continue to come in seven days a week. Unlike a manufacturer that can simply cut back on production, the postal service is going to get the same amount of mail regardless to whether it delivers five days or six. So what the postmaster is actually saying is, he wants the employees to continue to do six days of work, while only being paid for five.  It also means that on Monday letter carriers are going to be forced to process and deliver 24 hours of mail in eight hours – the mail for Saturday, Sunday, and Monday. As a result, the postal sevice will have an incentive to steal even more of their overtime.

The postal service is simply trying to institutionalize the robbery that’s already currently going on illegally. But you won’t hear about that in the mainstream media – at least, until someone snaps and kills innocent postal workers, or God forbid, goes berserk on someone’s front porch. But mark my words, once that does happen, and it’s going to, you won’t be able to get passed the hordes of media with a blowtorch – and never once will the media suggest that the problem lies in senior post office officials being criminally negligent.  So someone’s got to bring this to the attention of the American people.

“The USPS should immediately present a plan to ensure that workers are immediately reimbursed for their lost wages, and that appropriate disciplinary action is taken. Those individuals responsible for cheating New Hampshire families out of hard earned wages must be held accountable . . . In May of this year, I wrote to USPS Inspector General David Williams requesting that his office investigate claims that the United States Postal Service had altered letter carriers’ timesheets on an electronic time system for the last six years. “

Arbitrator Sherrie Rose Talmadge said in her December 2, 2009 decision that “Management’s violations were so egregious over a period of many years that punitive damages were awarded to deter the service from further clock ring violations.” But even after all of that admonishment, Congresswoman Carol Shea-Porter (D-NH) finds that time fraud within the postal service is continuing.

The American people should be aghast over the fact that a United States government agency is casually committing a felony against American citizens. But the fact is, poor and middle class workers in this country are being rapidly conditioned by both the government and the corporate media to meekly accept the ethical standards – and soon, the living standards – of a banana republic.

So with that, I’ll respond to the above reader with a question of my own. How can any responsible journalist NOT continue to beat a drum over this issue? 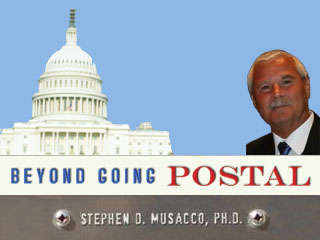