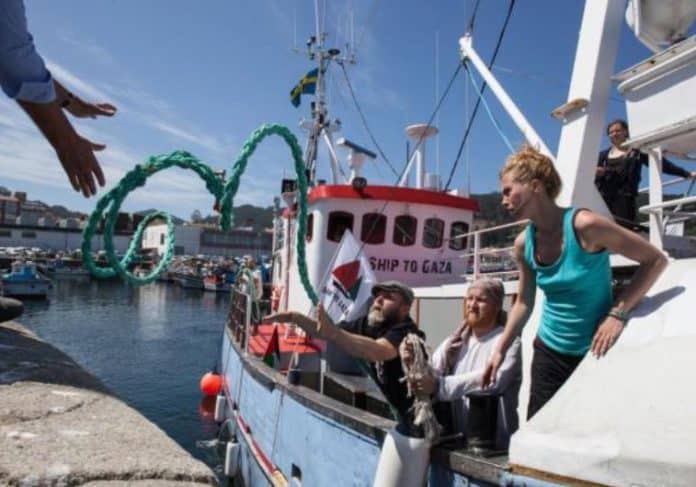 We are heart-sick and outraged about the brutal attack launched by the Israeli Military on the Free Gaza Movement’s flotilla of boats in the early morning hours (Eastern Mediterranean time), Monday, May 31. The boats were carrying civilian passengers and humanitarian aid into the besieged Gaza Strip, and were clearly in international waters when this illegal attack occurred, in violation of international law.

The number of dead and injured are still unconfirmed, but the lowest figures reported are 9 killed and 34 injured. The Israeli Government has still not released their names. Over 700 citizens from nearly forty countries were on board the flotilla vessels.

We grieve for those who have been killed and pray for the recovery of those who have been injured. We salute them for their sacrifice in solidarity with Gazans suffering under a prolonged and immoral siege, which is itself a despicable and illegal act of collective punishment upon a civilian population. People on board the flotilla boats included human rights activists, journalists, public servants, and Palestinians hoping to reunite with family members. Some of those on board, we know personally. We continue to marvel at the courage, dedication, and moral clarity of all these activists.

Like our daughter Rachel Corrie, they were coming to the aid of the people of Gaza because governments of the world have failed to act. Our hearts, go out, as well, to the families and friends of all those on board the flotilla vessels, many of whom may still not know the fate of their loved ones.

We call on the U.S. Government and governments of the world to act now. First, the well-being of all the flotilla passengers still in Israel must be secured, and the identities of those killed and injured must be released immediately. Second, governments around the world must demand an independent investigation into the attack on the flotilla and the killings that occurred. An Israeli-led investigation into an international incident of this magnitude is unacceptable.

Our family’s own experience has made it all too painfully clear that the Israeli military is unable or unwilling to adequately investigate itself. Third, the U.S. and other governments can and must insist that other boats from the flotilla, including the MV Rachel Corrie, named for our daughter, be permitted to sail through international waters to Gaza unobstructed. Finally, we demand that the governments of the world act as courageously as did the activists on the Free Gaza flotilla and, themselves, break the illegal and immoral siege of Gaza.

Bios
Cindy and Craig Corrie are the parents of human rights activist Rachel Corrie who was killed on March 16, 2003, by an Israeli military, Caterpillar D9R bulldozer in the Gaza Strip as she tried to prevent the demolition of a Palestinian family’s home. Seven years after her killing, a civil lawsuit in her case opened in Haifa, Israel March 10th and is now in recess until September.

The Corries have made numerous visits to Israel, the West Bank, Gaza, and Egypt. In March 2009, they traveled with a Code Pink delegation from Egypt through Rafah Crossing to challenge the Gaza siege and to witness the aftermath of Israeli military attacks several months earlier in Operation Cast Lead. In September 2009, they returned to Gaza with the first Rachel Corrie Foundation Gaza Delegation.

The Corries reside in Olympia, Washington, where through the work of the Rachel Corrie Foundation they pursue justice and peace in the Middle East and address U.S. foreign policy in the region. The Corries are recipients of a Human Rights Advocate of the Year Award from Seattle University’s Human Rights Network, a Pillar of Peace Award from the Pacific Northwest Region of the American Friends Service Committee, and a Peacemakers Award from The Rebuilding Alliance in Redwood City, California.