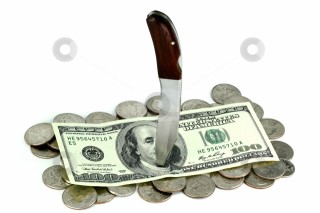 By STEPHEN BERNARD
NEW YORK — Stocks tumbled Friday after the Labor Department said hiring remains weak and Hungary became the latest European country to report its economy is in crisis. Interest rates dropped as investors moved their money into the safety of Treasury bonds and notes.

The Dow Jones industrial average dropped about 325 points in late afternoon trading and fell below 10,000. All the major indexes were down more than 3 percent. The concerns about Hungary pounded the euro to a four-year low.

Retailers were among the hardest hit stocks after investors bet that a weak job market would discourage consumers from spending. Financial stocks also fell sharply on concerns that borrowers would continue having problems paying their bills. Banks were further hurt by worries about their vulnerability to Europe’s increasing troubles.

The government’s May jobs report was an unpleasant surprise for investors who had grown a little more upbeat about the domestic economy the past few days. The Labor Department said private employers hired just 41,000 jobs in May, down dramatically from 218,000 in April and the lowest number since January. The news made it clear that the economic recovery isn’t yet picking up the momentum that investors have been looking for.

The government also said 431,000 jobs overall were created last month, but most of those jobs, 411,000, came from the government’s hiring of temporary census workers. The overall number also fell short of expectations. Economists polled by Thomson Reuters had forecast employers would add 513,000 jobs.

“People are looking for one turning point,” Daniel Penrod, senior industry analyst for the California Credit Union League, said of the monthly jobs report. “That’s not realistic. This growth will be much slower and more gradual than in the past.”

The jobs report was the latest in a series of reports this week that showed the economy isn’t as robust as hoped. But investors had sent stocks higher as they bet on stronger job growth in May.

The reality of the report erased that optimism.

“It’s almost as if the worst fears of the market were realized, at least in this one report,” said Richard Sparks, senior equities analyst at Schaeffer’s Investment Research.

Investors were worried that employers’ reluctance to hire would further hurt consumers. Investors were already nervous about consumer spending after retailers reported Thursday that their sales were sluggish during May. Clothing retailer stocks were among the big losers after the jobs report Friday as investors bet that shoppers would stick to buying only necessities.

Meanwhile, the spokesman for Hungary’s prime minister described the country’s economy as being in a “grave” situation. However, he said, the government is ready to avoid a crisis like the one being faced by Greece, which had to be bailed out by the European Union. Spain and Portugal are also struggling.

Fewer than 300 of the nearly 3,000 stocks that trade on the New York Stock Exchange rose. Volume came to 1 billion shares compared with 850 million traded at the same point Thursday.

Analysts say there is little in the way of economic news that could shake the market from its funk.

“It’s hard to see over the next month what will make stocks rally,” said Paul Zemsky, head of asset allocation at ING Investment Management in New York. It might not be until next month’s employment report that investors get the kind of positive news that could propel stocks higher, he said.

Investors are also worrying about the impact that Europe’s economic problems could have on the U.S. During the past month, investors have been preoccupied with rising debts in Europe, fearing they could hobble the regional economy and eventually the U.S.

“The events in Hungary are reminding the market that the problems with sovereign debt are a lingering affair,” said Nick Kalivas, vice president of financial research at MF Global in Chicago. He added that reminders of Europe’s debt crisis will pop up on occasion and send stocks lower, in much the way that the market faltered early in the subprime mortgage crisis.

“Until there’s a resolution, we’re just going to kind of have to deal with it,” Kalivas said.