Nothing could have prepared him for what he witnessed that day.

Arthur Seltzer is still processing it 66 years later and “will be until the end.”

He recalls his Higgins landing craft splashing across the waves toward the Normandy beaches on D-Day, then jumping – with comrades – into water over his head. 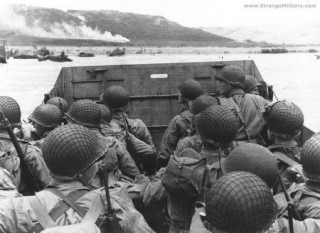 “It was a mess, a bloody, gory mess,” said Seltzer, 86, of Cherry Hill. “You saw sights you never want to see again.”

Bodies were tossed by waves dyed red with blood. Bullets whizzed by and pinged against metal obstacles. And comrades lay in the sand with horrible gaping wounds, some with legs and arms blown off.

Sunday, for the first time since that June 6, Seltzer is set to walk the sands of Omaha Beach, a scene of sheer terror when he was 20, now a solemn place of remembrance.

“I know it will be an eye-opening experience after all these years,” said Seltzer, a former Philadelphia resident who will be accompanied by his wife, Mildred, and a friend.

They’re retracing the path Seltzer took, leaving Portsmouth, England, the same port his transport ship sailed from, along with a mighty armada on the way to France.

He plans to attend D-Day ceremonies Sunday, take a quiet walk on the beach, and remember a historic day, the beginning of the end of Hitler’s Third Reich.