Is the Government Putting Something in the Water?

When I was a teenager my grandfather once told me that when you start thinking that everyone else is crazy, it’s time to look in the mirror. Well, it must be my time, because this country is looking more and more like a Stepford society to me every day. 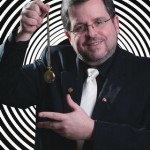 It must be something in the water, because every since the Reagan era the American people seem to be walking in their sleep, allowing the government and multinational corporations to cut their throats at will.

During Iran-Contra we simply stood by while Ronald Reagan sold arms to the very people that our troops are now facing, and there is strong evidence that suggest that he made a deal with the Iranians to hold American hostages until after the election. Then we watched in complete and utter silence as he flooded our inner cities with drugs in order to support his illegal excursion into Nicaragua. We also stood idly by while under Reaganomics he allowed speculators to dismantle our industrial base and sell off some of our largest corporations one piece at a time to benefit a small handful of people.

But the Republicans told us to not to worry. They said, if you’ll just give up the right to write off the interest on your credit cards and other debts temporarily, the rewards that the rich are enjoying will eventually “trickle down,” and you’ll all be showered with the benefits of a robust economy. But their promise never came to past. The only thing that trickled down was our having to pay the tax burden of the rich – and even as I write, the rich are enjoying additional tax breaks while we still haven’t regained the simple right to write off the interest on our debts.

As a direct result of our apathy, we’re still suffering from the effects of our stupidity today, thirty years later, and due to the assault on our educational system we haven’t learned a thing. So now the Republican Party and their corporate cronies have an entirely new generation of victims in which to feed that nonsense. They recycle their crap about every ten years, after the American people have time to forget the disaster they created previously. A simple review of history will show that going all the way back to 1900, with few exceptions, every time the Republicans come into office the middle class has to pay a price. Republican policies were responsible for the Great Depression, but let’s just look at recent history.

Due to the freewheeling fiscal policies of conservative Republicans, between 1986 and 1989, spanning the presidencies of Reagan and Bush Sr., the FSLIC had to pay off all the depositors of 296 institutions with assets of over $125 billion, while the American people just stood around and watched.

In 1988 Silverado Savings and Loan collapsed, costing the taxpayers $1.3 billion. It was headed by Neil Bush, brother of George W. The investigation alleged that he was guilty of “breaches of his fiduciary duties involving multiple conflicts of interest.” The issue was eventually settled out of court with Bush paying a mere $50,000 settlement. Yet, again, we just stood by and watched.

In 1989 there was the Lincoln Savings and Loan scandal, involving Charles Keating and John McCain. Lincoln went bankrupt, and it resulted in over 21,000 investors losing their life savings. Most of the investors were elderly, and the loss amounted to about 285 million dollars. Thereafter, John McCain was censured by the Senate for trying to use his influence to protect Keating, who ended up going to the federal penitentiary. Yet, again, we simply stood around with a blank look on our faces.

We also stood by and watched while Dick Cheney, under Bush Sr, reconfigure our military to sell off many of its most vital functions to private corporations. The Republicans are always talking about wasteful spending. Well, consider this – we now spend billions of dollars to have the most awesome military force in the world guarded by private security guards. How does that make any fiscal sense?

Well it certainly made sense to Cheney, because he walked right out the door into the arms of Haliburton to make a killing on the windfall profits from this scam. And if that wasn’t enough, he then returned as vice president to expand the money-making potential of the scam by lying to the American people in order to invade Iraq.

That led to the death and maiming of thousands of American troops, and nearly a million Iraqi citizens – and all in the name of exhausting our national treasury and transferring the nation’s wealth into the pockets of his friends, cronies, and colleagues. But still, the American people didn’t say a word. We simply continued to walk around like zombies with a blank look on our collective faces as we stared into the void of MTV, BET, and ESPN.

The level of our stupidity must have even shocked them. So they looked at one another and said, “What the Hell, we’ve exhausted the national treasury, but they still have a few dollars in their pockets.” So they hit us with the Wall Street scam. Yet, even with that, we’re still walking around in a stuporous daze.

They’re able to get away with what they have because our current population is so undereducated and distracted by our hedonistic pursuits that we have no sense of history. Also due to our lack of education, they’ve been able to convince many of us that any attempt to protect ourselves and our families from this corporate fraud constitutes socialism. It’s the American way to allow Haliburton to raid our treasury to electrocute our troops and provide them with contaminated water, but it’s a socialist plot to spend a dime on putting Americans back to work, or provide our families with affordable healthcare.

Thus, the American people are rapidly sliding down a slippery slope where corruption is considered the norm. That’s why I’m weighing in so heavily on the corruption that’s taking place in the postal service. In the past, the government protected the American people from fraud and abuse, so private corporations had to steal from us covertly. But gradually the mores of our society changed to where private corporations could do it openly. But now, the government has gotten in on the act. The United States Postal Service has now embraced the philosophy that it’s perfectly alright to commit acts of abuse, intimidation, and actual felonies against American citizens – and many the victims of these moral atrocities are the very veterans that this nation claims to honor.

When are we going to say enough is enough? It had better be soon, because at the rate that America is descending into the despotic abyss, it won’t be long before Washington’s corporate puppets outlaw our right to dissent.

Where are you, President Obama? The postal service is a United States government agency. You could improve the lives of over 600,000 Americans with a simple phone call. Why hasn’t that call been made, Mr. President? Where is that change you promised that we could believe in?

The Postmaster General, and Inspector General, must go!