– The ADL is oblivious to the fact that they are making an alliance of convenience with the enemies of tolerance, the Christian right –

The ADL had already given up its commitment to tolerance, see Religious Right Figures Signing Pro-war Statement Identified by ADL as Assaulting Tolerance and Pluralism in 1994 (see graphic below), so it was not great surprise to see it oppose the building of an Islamic Center in 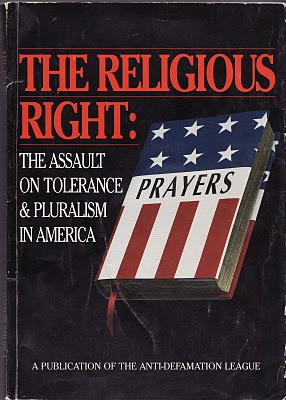 The Religious Right: The Assault on Tolerance and Pluralism in America: A Publication of the Anti-defamation League (1994)

The First Amendment must make way to the demands of war and intolerance.

Peter Beinart has an excellent piece on how the Israeli occupation of the West Bank inexorably led the Anti-Defamation League into abandoning its principles, culminating in the awful decision to call for banning the Islamic Center in lower Manhattan.

First, this has been building for a very long time. I remember my first visit to Israel, in 1981; even then older Israeli academics, veterans of an earlier era (literally — many of them had fought in 1967 and 1973), would talk grimly about the Likud government and its harsh policies, saying things like “I feel as if we’re living under a foreign occupation.” And it’s only gotten worse since then.

Second, Beinart doesn’t talk as much as I’d like about how this relates to U.S. politics. As he says, American liberals, while they fiercely support Israel’s right to exist, can’t bring themselves to support the policies of Israel’s current government. So the Israel-is-always-right crowd has gravitated to people who don’t have any problem with the occupation — which means the American hard right, including the Christian right. And they seem oblivious to the fact that they are thus making an alliance of convenience with the enemies of tolerance.

Anyway, it has been gratifying to see how many people understand just how wrong the ADL was; and special props to Mayor Bloomberg, who said exactly the right things.