“I am in favor of the Zionist state.  I would gladly kill Arabs, even slaughter them.  I can’t allow Arab lovers to ruin the perfect life I lead.”….Eden Abergil

A “Kapo” was a Jew who served the Nazis, sometimes as administrators, but more often as thuggish camp police, even more brutal than the Nazi’s themselves.  Though over a million living in Israel claim to be “holocaust survivors,” in reality only a few thousand survived the camps, many of them “Kapos.”  To help understand the absurdity of these “survivor” claims, we can examine another group from that era, American war veterans.

With so many Nobel Prize winners, mathematics is no longer Israel’s strong suit.  Neither is truth.

Whether discussing how many Palestinians were expelled, “liquidated” or imprisoned or how many tens of thousands of rockets Hamas has rained on Tel Aviv, with so few casualties, Israeli credibility is at an all time low.  Eden Abergil has done as much as any Israeli citizen to bring that fact before the world, a young girl assigned to work as a Kapo in the Israeli “camp system.”  Is Abergil a victim, a humanitarian whistle-blower or a sociopathic Kapo torturer?

Oliver Lustig writes, in his Dictionary of the Camps:

“The Häftling (inmate)  who was wearing on the left arm a black band on which it was written –KAPO– in Gothic letters of immaculate whiteness, was a chief…he could strike, beat, kill any Häftling who did not belong to the inner hierarchy of the camp…

Kapos were recruited from among sadists, from among the unscrupulous ones, who forgot they belonged to the human species, from among those who, faced with the alternative die or kill, preferred to kill. In order to prove their servility and to maintain their position as chiefs, they tried to surpass the SS-men in ferocity.  The Kapos kit, beat, killed out of sadism or envy, out of the desire to assert themselves as chiefs or out fear of losing their function, out of hate of man or out of the mere pleasure to trample underfoot and torment the fellow men.”

what the job of camp “Kapo,” how Eden Abergil and tens of thousands of other Israeli youths spend their national service, was like, the beatings, the humiliation and its obvious dehumanizing effect as was made clear by Abergil.

Was Eden Abergil a whistle-blower?

Was Abergil attempting to focus world attention on the 300,000 Palestinians who have “disappeared” over the past 60 years?  Was she exposing the Israeli “gulag” system that may be holding up to 100,000 Palestinians prisoner?  If this was her goal, CNN wasn’t having any part of it.  Not one question was asked about what her job was in the camps, how she felt about non-Jewish Israeli citizens.  That came out later.

Eden Abergil, a 24 year old Israeli who recently finished her national service in the IDF, posted photographs on Facebook of herself with Palestinian torture victims.  We have seen things like this before, of course, but last time it was Americans.  We don’t know how many photos we have or what acts they portray as CNN chose to show us only one, a depiction of Abergil mugging for the camera before a backdrop of blindfolded and “tie-wrapped” elderly Palestinian civilians.

When questioned by the Haaretz News Service in Israel, Abergail said:

I am in favor of the Zionist state.  I would gladly kill Arabs, even slaughter them.  I can’t allow Arab lovers to ruin the perfect life I lead.

Abergil told CNN that she has received numerous death threats, many from her neighbors in Israel and has requested police protection.  The question is, did Eden Abergil go on worldwide media proclaiming to be a murderous sociopath out of bad judgement or is this a clever attempt at depicting the IDF as torturers and war criminals?  Now we have hundreds of similar photos going up from dozens of former IDF “kapos.”

Abergil’s photos are the first to come out of the camp system in Israel, known for its torture, summary executions, starvation and daily brutality.  Little is known or has been reported in the west about the 60 year program of ethnic cleansing or the nature of Israel’s apartheid state and system of racial and religious laws that openly discriminate against Christians and Muslims.

Comments by fellow Israeli’s made on Abergil’s Facebook page referred to photographs of  the “chunky” former IDF “Kapo Queen” taken with torture victims as “sexy.”

Abergil has raised, not only the ire of fellow Israeli’s but military officials in Israel as well.  With Israel’s role in pushing America into a war with Iran coming under increasing attack and their role in falsifying intelligence leading to the disastrous 2003 invasion of Iraq by the United States and Britain, the legitimacy of the “Jewish only” Zionist state in Israel has never been under wider pressure around the world.

With Israeli terrorist and serial killer, Elias Abuelazam being pulled off a flight from Atlanta to Tel Aviv and the recent failure by Israel to address the killing of between 9 and 16 unarmed civilians on the Mavi Marmara, the theft of millions in personal items and the illegal detention of up to two dozen peace activists seized in international waters, Israel’s credibility, even while exercising “veto power” over unfavorable stories in the British and American press, is at an all time low.

In Britain, a website has been established, British Propaganda Corporation, not only spoofing the BBC, but highly critical of what is said to be virtual total Israeli control of all media outlets in Britain, including and especially the state run news service, the British Broadcasting Corporation.

Current population estimates put the number of displaced Palestinians at 6 million with those in temporary camps estimated by Israel at 400,000 and by other sources at between 700,000 and 980,000.  Each year, new Israeli condominium projects displace thousands more, adding to the figures given.  To this mix, we add nearly 1 million “guest workers” who, with their families, are also virtual refugees, “stateless persons” subject to expulsion at any time as with Palestinian citizens of Israel. 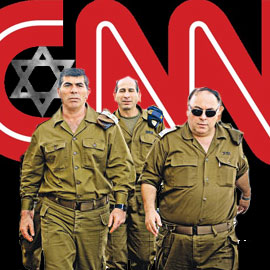 Managing this process, the destruction of tens of thousands of homes, a vast camp system, surveillance of not only Muslims in Palestine but the entire Jewish population as well, is a vast bureaucracy largely financed by the United States.  Young Jews, many of them Americans, serve in the IDF, some of them as part of this system.  Some of the daily tasks performed are not only inhumane and demeaning but, technically, criminal acts subject to punishment according to international convention.

Perhaps what we are told is right, all Muslims are extremists and must be cleansed from Israel in order to maintain the purity of the Jewish race, as touted in recent scientific studies quoted in the New York Times.

“The surveys provide rich data about genetic ancestry that is of great interest to historians. “I’m constantly impressed by the manner in which the geneticists keep moving ahead with new projects and illuminating what we know of history,” said Lawrence H. Schiffman, a professor of Judaic studies at New York University.

One of the surveys was conducted by Gil Atzmon of the Albert Einstein College of Medicine and Harry Ostrer of New York University and appears in the current American Journal of Human Genetics. The other, led by Doron M. Behar of the Rambam Health Care Campusin Haifa and Richard Villems of the University of Tartu in Estonia, is published in Thursday’s edition of Nature.”

The studies along with extensive and continual mathematical documentary proof of 6 million Jewish deaths during the holocaust are used as justification for Israel’s “junkyard dog” foreign policy, arms dealings with rogue states like Libya, South Africa and North Korea and their policies of ethnic cleansing.  Much of the impetus for “revisionist” history, those advocating a reassessment of the holocaust after declassified documents have brought some traditionally accepted dogma into doubt, has been the desire to “disarm” Israels dependence on the holocaust to justify policies against the Palestinians that parallel many aspects of Germany’s persecution of the Jews under Hitler.

Thus, we may have Eden Abergil, not as a Zionist “nutcase” but exposing, perhaps unsuccessfully, what no media organization will speak of.  Those men on the bench, those prisoners, so many thousands arrested, detained, questioned, worse, and none ever released.

Where do they go?