Home Government Calls for Industrial Policy … ‘Socialism,’ Sarah Will Squawk … But We... 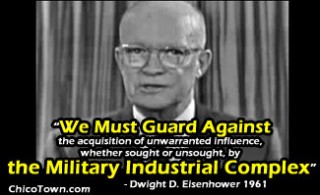 It’s apparent to all but the most blind and corrupt policymakers that something is scary about this recession/recovery/recession [40 percent chance of a double-dip, says Roubini].

We are at another recession, effectively, if folks looking for jobs matter as the defining characteristic of a recession [they technically do not].

If only big business had less regulation, all would be well, assures the GOP. Right. How many Americans are buying this line? Unknown.

The Democratic Strategist’s William Galston calls for massive public investment that—unlike the injection of public dollars into the military-industrial, high-tech industries and other big-money sectors—directs public money into economically useful enterprises, for the rest of us.

The DoD contracts awards offer a daily illustration of how much of our public wealth is directed into permanent war and endless selling of the weapons of war to the world, guarding favored big-money sectors of our country. What that German socialist Eisenhower called the “military-industrial complex.”

Now, Galston (as others before have argued) wants an industrial policy that pushes economic growth in socially useful directions, what the Center for Wisconsin Strategy (COWS), a national policy center, calls “high-road economic development.”

So Sarah and the South will scream: ‘Socialism.’ So what? We’re there already.

In the United States of America, huge-moneyed interests rule and direct public investments their way through the labor of useful idiots and stooges in Congress.

Not to sound like a campaign slogan, but it is time for a change.

[We are living in a] different era … How long will it take our policy makers and political parties to absorb the implications of that stark, undeniable phrase? When they do, they will realize that we have only two strategic options: Either we accept years of sluggish growth and high unemployment, or we shift to a new model that mobilizes the record level of private capital now sitting on the sidelines for public investments that will boost economic activity and employment in the short term, and economic productivity and growth in the long term, while generating rates of return sufficient to interest investors.

This is why we need a national infrastructure bank as the linchpin of a public investment strategy driven by economic analysis rather than congressional politics. Rather than bridges to nowhere, we need a bridge to the future. It’s time for hide-bound appropriators to get out of the way.