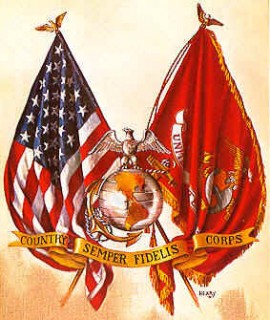 – From America’s VetDogs: America’s VetDogs uses guide dogs, service dogs, and innovative technology to help disabled veterans once again live the lives they used to. Not only does a VetDog provide assistance with daily activities, the dog provides the motivation to conquer new challenges. People focus on the dog, not the disability. With a VetDog by his or her side, a veteran is not alone. –

BY JONA ISON in the CHILLICOTHE-Gazette

CHILLICOTHE, OHIO — A Marine veteran is waiting for an apology after he said he was chased out of a local store for having his service dog with him.

Joseph Lucas, of Chillicothe, had gone into Sack-N-Save on East Main Street just after 7 p.m. Wednesday to run an errand for his daughter.

His service dog of two years, Harley, was by his side as usual, he said. As he walked toward the freezer section of the store, he said an employee ran over to him and told him animals aren’t allowed in the store. Lucas said he told her Harley was a service dog.

The woman ended up calling Chillicothe police, reporting a man with a dog was refusing to leave the store, he said. A full report wasn’t written by the police, but there was a notation that the dog was a service animal, Public Information Officer Bud Lytle said.

Lucas said police went into the store to explain the situation to the employee.

“The woman never offered to apologize. She didn’t even admit she was wrong,” Lucas said. “She embarrassed me in front of everyone and God. … They made me like a criminal. … Every person in that store thinks I’m a criminal and I was wrong.”

A manager at Sack-N-Save said Thursday he was unaware of the complaint and would look into what happened. He asked the Gazette to call back for comment today.

Lucas said in most places he’s been welcomed — employees know him and Harley — but he occasionally has had people make comments about having his German shepherd in a store or restaurant. Wednesday was the first time he said he was told to leave and the police were called.

Lucas and Harley were featured in a July Chillicothe Gazette article to spread awareness of the likely increased use of service dogs since the U.S. Department of Veterans Affairs has been placing more of them with veterans.

The dogs are trained to help with issues such as post-traumatic stress and seizure disorders — disorders that aren’t as visible to spot for most people as those who are blind and have a guide dog.

Lucas notified the Ross County Health District of the issue, specifically since he said the employee cited the district as a reason for forbidding animals in the store. Rami Yoakum, director of communications, said the health district doesn’t direct businesses on what they can and cannot ask of those with service animals, but it does provide guidance in the Ohio Uniform Food Safety Code.

The code states live animals typically are prohibited on the premises of a food service or retail food establishment, but there are a few exceptions.

One of those exceptions is service animals controlled by the person or trainer in “areas that are not used for food preparation and that are usually open for customers, such as dining and sales areas, if a health or safety hazard will not result from the presence or activities of the service animal.”

Yoakum said the Health District will be sending the store the applicable code information and will follow-up with a phone call. He added that establishments should have someone who stays updated on the codes.

The federal American with Disabilities Act protects people with service animals, and businesses that don’t follow the act can be fined.

Lucas said he doesn’t really want the business to be fined, but he does want employees to be familiar with the rights of people with disabilities.

Businesses have the right to ask if the animal is a service animal and what tasks it has been trained to perform, but that’s where the questions should stop. Lucas and others with service animals are not required to provide proof of disability or certification of identification for the animal.