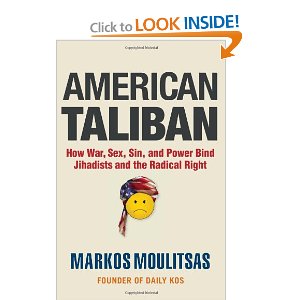 Conservatives say a lot of ridiculous things. But few were more ridiculous than the repeated claims that liberals were in league with Islamic terrorists.

That’s why I wrote the book American Taliban: How War, Sex, Sin, and Power Bind Jihadists and the Radical Right.

In the book, I show how similar both the American Taliban and Islamic Jihadists are — from their fetishization of violence and guns, to their love of theocracy, to their hatred of women and gays, to their fear of scientific progress and education, to their weird hangups about sex, to their disdain for popular culture.

I’ve got to say, I’m pretty proud of this book. It’s my best yet. And I’m definitely enjoying the hysteria over it from our friends on the Right. Turns out, they’d rather people not make the obvious connections between them and their supposed enemies!

The book is out on paperback, so it’s relatively cheap. It’s a great read. Buy it, read it, then pass it around. Let’s spread the word that our domestic Taliban is just as regressive as Islamic fundamentalists. And given the opportunity, they can be just as deadly.

Or pick it up at your favorite book store.

As always, thanks for everything you do.