While freedom of expression is hailed as the birthright of democratic and modern nation states, respect and civility have long been relegated to the backburner.

Faryal Leghari, via  My Catbird Seat 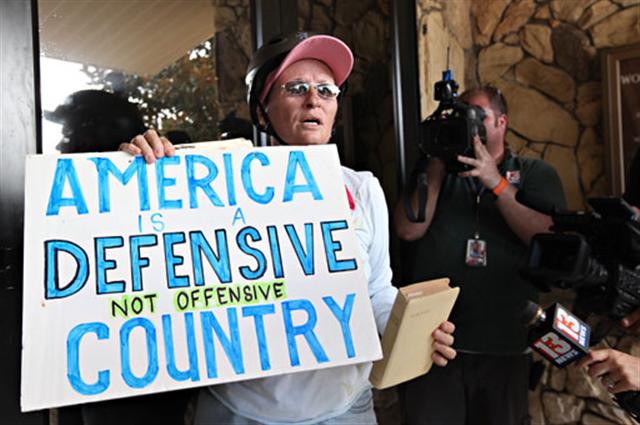 DUBAI — This year the September 11 dateline comes encased in unbridled controversy of a different kind. Thanks to the ‘Burn A Quran Day’, the brainchild of one Pastor Terry Jones of the Dove World Outreach Centre in Gainesville, Florida, being staged to commemorate the September 11 anniversary. This controversial act that was in the pipeline since months has stirred a hornet’s nest.

It has now involved the top US political and military leadership. So much so that following General David Petraeus’s warning that it could endanger the lives of US troops, Secretary of State Hillary Clinton has also spoken out strongly against  the plan, calling it “disgraceful and  disrespectful”.

The method behind this madness is apparently the burning desire of Pastor Jones to send a powerful message to the radical element of Islam by burning the Holy Book of the Muslims. Makes for some wonderful reasoning, does it not? The act of burning the holy scripture of Muslims is hardly going to deter radicalism; rather it is surely going to fuel further radicalism. Even moderate sections of Muslim societies worldwide are bound to take extreme offence for an act dripping with vitriolic hatred by a section of the American Church.  The fact that this particular Church does not have many followers is irrelevant. What it hoped to achieve,  it already has. Unprecedented attention. What is more attention grabbing than brandishing an anti-Islamic stand and taking a step so bold as to burn the holy Quran? Pastor Jones is defiant and plans  to stage a bonfire on the date where members of his Church will burn hundreds  of copies of the Quran. He feels that the time has come “for America to quit apologising for our actions and bowing to kings.” Who he was referring to when talking about kings has been left ambiguous. If  one was to ignore the rants of this driven extremist, hell-bent on following the radical path in total contradiction to his purported aims, can one ignore the ramifications if Pastor Jones and Co do go ahead with their mad plan?  For they seem determined to do so despite the city council having forbidden the staging of an open-air bonfire.

At the same time,  the coming together of interfaith groups in Washington comprising of Jewish, Roman Catholic and Muslim leaders to condemn such a barbaric plan in violation of American values and the Bible has done little to appease the growing concern among American Muslims. Already there is heated debate underway in the country concerning the building of a mosque and Islamic community centre near Ground Zero in New York, which has left American Muslims, rattled at the level of opposition directed against the venture. This is despite President Barack Obama’s show of support for the Islamic Centre at the controversial site.

Coming back to the implications of this brazen act of total disrespect and disregard of another religion, it will not be presumptuous to imagine the fallout on serving US troops engaged in battling ‘extremist’ Muslims in Afghanistan. Wide-scale protests have already been reported in Kabul and even Indonesia. With the date drawing closer, these protests are likely to grow bigger and turn violent. That is why General Petraeus and NATO chief Anders Fogh Rasmussen have expressed alarm over the proposal. It directly jeopardises the coalition mission in Afghanistan and will affect US engagement in not only Pakistan but also the Middle East, Yemen, Africa and the Far East. Not to forget Europe that already faces a big challenge with its growing population of radicalised homegrown Muslim youth.  It is likely to land the insurgency in Afghanistan an ace card to fuel sentiments against foreign forces.

The Taleban and Al Qaeda while pursuing different agendas have formed a strong cohesive basis to draw recruits. Their main driver is the anti-West sentiments that are fed by none other than western policies believed to be targeting Muslims. That was the case even previously when reports of desecration of the Quran and disrespect of Muslim practices in Guantanamo or Abu Ghraib at the hands of US forces and prison authorities surfaced. The feeling of religious and social persecution is not without basis. In fact,  over the past few  years there have extreme reactions witnessed even among moderates such as on the occasion of the Danish newspaper’s publishing of Prophet Muhammad’s (peace be upon him) caricature.

While freedom of expression is hailed as the birthright of democratic and modern nation states, respect and civility have long been relegated to the backburner.  This is not how enlightened democracies and progressive societies behave.  Fine, this particular Church probably represents a miniscule segment of the American democratic system but the trail of slime it is bound to leave in its wake is toxic enough to irreversibly damage the recent efforts of bridging the divide with the Muslim world.

What is more alarming is how the developing scenario is beginning to resemble the Dark Ages. If religious persecution and intolerance are to dictate the order of the day in a society where democratic values and understanding are but hollow tunes, what is the world coming to? Till how long will Islam be held responsible for the folly of mislead miscreants who did nothing but violate the teachings of a peace-loving religion. A religion that makes it mandatory for Muslims to respect other religions, allow the believers of other faiths to practice their religions and protect their houses of worship.