In reading these articles, I hope that readers will be able to discover the stories of the men behind the statistics of Guantánamo — and the still-repeated and thoroughly unfounded claims that the prison holds “the worst of the worst.”

By Andy Worthington via My Catbird Seat 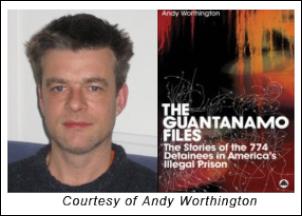 Over the next month, in an attempt to focus attention more closely on Guantánamo, and on the remaining prisoners who are held there, I’ll be publishing an eight-part series of articles (in conjunction with Cageprisoners, for whom I work as a Senior Researcher), telling, for the first time, the stories of the 176 men who are still held.

The series begins with the stories of 20 men described by the US authorities as part of the “Dirty Thirty,” seized crossing from Afghanistan to Pakistan in December 2001, who are mostly regarded as having been bodyguards for Osama bin Laden, even though there is copious evidence that these allegations were produced by a number of prisoners who were tortured — including Mohammed al-Qahtani, for whom Guantánamo’s version of the CIA’s torture program was devised in the fall of 2002, and approved by then-defense secretary Donald Rumsfeld.

In reading these articles, I hope that readers will be able to discover the stories of the men behind the statistics of Guantánamo — and the still-repeated and thoroughly unfounded claims that the prison holds “the worst of the worst.” In the accounts, readers will encounter a variety of different individuals. Many of these men traveled to Afghanistan before the 9/11 attacks to fight with the Taliban against the Northern Alliance, and suddenly found themselves to be enemies of America in a “War on Terror,” and others were not even involved in any kind of military conflict, and were, instead, students, humanitarian aid workers, missionaries, or economic migrants, caught in the wrong place at the wrong time.

Many of the 176 men who were still in Guantánamo at the time of writing were rounded up for the substantial bounty payments (averaging $5000 a head) that were paid by the US military for “al-Qaeda and Taliban suspects,” and, given that 596 men have already been released, it should be profoundly troubling that the majority of the men still held were either foot soldiers in an inter-Muslim civil war that had nothing to do with al-Qaeda or the 9/11 attacks, or civilians still struggling to establish their innocence.

Readers will also encounter many stories of brutality and torture in these accounts, but, I believe, few stories of genuine terrorists, and should bear in mind that, as advised by President Obama’s interagency Guantánamo Review Task Force, only 34 of the remaining 176 men are to be put forward for trials, although 48 others are to be held indefinitely without charge or trial (because they are regarded as too dangerous to release, even though there is insufficient evidence to put them on trial), and 92 others are to be released.

One other man, Ali Hamza al-Bahlul, is serving a life sentence in isolation after being convicted in a one-sided trial by Military Commission in November 2008, in which he refused to mount a defense, and another — Ibrahim al-Qosi, a cook in an al-Qaeda compound — is waiting to hear how much longer he will be imprisoned after accepting a plea deal in his trial by Military Commission in July. Another prisoner, Ahmed Khalfan Ghailani (not included here) was transferred to New York in May 2009 to face a federal court trial for his alleged involvement in the 1998 African embassy bombings. His trial is scheduled to begin in the near future.

58 of the men approved for release (or for “transfer,” to use the Obama administration’s language, learned carefully from the Bush administration) are Yemenis, whose release was halted in January. After the capture of the failed Christmas Day plane bomber Umar Farouk Abdulmutallab, a Nigerian who was reportedly recruited in Yemen, President Obama capitulated to unprincipled criticism and issued a moratorium on any further releases to Yemen that appears to have no end date, and that clearly constitutes “guilt by nationality.”

I find it interesting to speculate on which of the Yemenis have been cleared (and who are the 31 Yemenis recommended for trials or for indefinite detention), as this information has not been made publicly available by the Obama administration, but more generally I’m interested to hear whether readers can figure out, from these articles, why the administration believes that there is a good reason to either charge or to continue holding 82 of these men, as it has never seemed plausible to me that there are 82 men in Guantánamo who pose what might be described as “a clear and present danger.”

The lists also contain references to the prisoners’ ongoing habeas corpus petitions in the US District Court in Washington D.C., where the prisoners have won 38 cases and the government has won only 16. Much of what has been confirmed about unacceptable evidence based on statements made by the prisoners themselves (under torture or duress) or by unreliable witnesses in Guantánamo or in other “War on Terror” prisons (who were subjected to torture, duress, or, in a few cases, the promise of better living conditions), has come from these proceedings, and it is disappointing that, at the time of writing, 12 of the 38 men who have won their petitions are still held.

In addition, it is no less disappointing that the majority of those who have lost their petitions were nothing more than low-level Taliban foot soldiers (and, in two cases, a medic and a cook), whose ongoing detention, on an apparently legal basis, is not a validation of the habeas process, but is, rather, an indictment of the unjust basis for holding “War on Terror” prisoners — neither as criminal suspects, not as prisoners of war — that was conceived by the Bush administration, and that has been largely preserved under President Obama.

Please note: The eight parts of the list contain the stories of three released prisoners who have not been identified — two of unspecified nationality who were released in Georgia in March 2010, and an Afghan released in Spain in July 2010.

Andy Worthington is the author of The Guantánamo Files: The Stories of the 774 Detainees in America’s Illegal Prison (published by Pluto Press, distributed by Macmillan in the US, and available from Amazon — click on the following for the US and the UK) and of two other books: Stonehenge: Celebration and Subversion and The Battle of the Beanfield. To receive new articles in your inbox, please subscribe to my RSS feed (and I can also be found on Facebook and Twitter). Also see my definitive Guantánamo prisoner list, updated in July 2010, details about the new documentary film, “Outside the Law: Stories from Guantánamo” (co-directed by Polly Nash and Andy Worthington, currently on tour in the UK, and available on DVD here), and my definitive Guantánamo habeas list, and, if you appreciate my work, feel free to make a donation.