With combat overseas still lingering, it seems that our fighting men and women will forever be in harm’s way. Although we currently have bullet proof vests and armored vehicles, the number of those who perish in battle is still far beyond acceptable. With technology available to deliver a virtual computer onto a tiny pane of glass and store thousands of songs onto a device the size of a pack of gum, what is being done to improve the invaluable lives of soldiers?

With that in mind, we have gathered and linked to ten upcoming devices that will protect the future soldier with both defense and offense in mind. Whether protecting from an attach a split second after it is launched to eliminating targets from unimaginable positions to defending an entire nation from a nuclear attack, they will have everyone from generals to cave dwellers rethinking combat decisions.

1. Beam Me Up. No, Really. If Captain Kirk and Willy Wonka can do it, why can’t we? We just might be able to someday according to Kevin Bonsor. He illustrates how photons have already been teleported in this guide from HowStuffWorks. Another laboratory was able to teleport a laser beam. Although solid matter is far more difficult to even theoretically teleport, the option to is ever growing. With capabilities of teleporting soldiers to the battleground, bombs to targets, or even terrorists directly to jail cells, the ways a teleportation device can protect the future soldier are limitless. 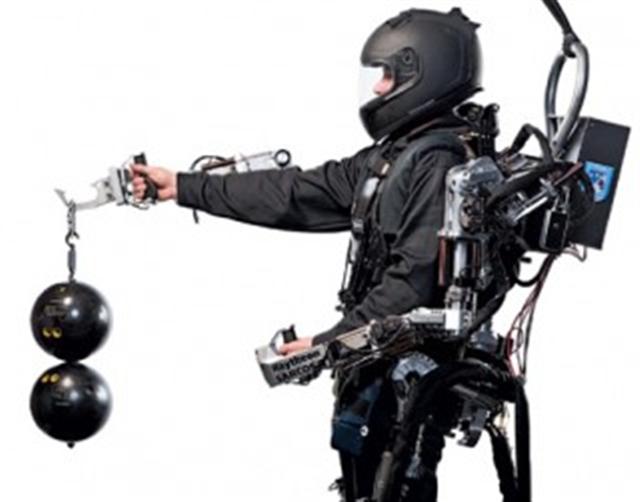 2. Iron Man is Here
The future suit of this movie and other blockbusters such as “Avatar” are not that far off. Raytheon, a technology company in Salt Lake City, is developing a robotic suit for the future soldier. The exoskeleton is essentially a wearable robot that amplifies its wearer’s strength, endurance, and agility. The suit allows the wearer to lift and set 200 pounds many times without tiring, yet is agile enough to kick a soccer ball or punch a speed bag.3. Airborne Laser Test Bed
Directed energy for missile defense is the focus of this system. In plain English: it’s a fancy laser beam that can shoot missiles out of the sky before they reach their target. In the movies, people are often forced to stand and watch helplessly as missiles are launched to reach their inevitable targets. With this upcoming device, a Boeing jet can intercept and destroy the missile.

4. Barrett M107 Sniper Rifle
A powerful new stealth rifle is changing the way the future soldier wages war. The rifle fires .50 caliber shots, one of the largest rounds available, in a semi-automatic fashion and at long distances. With a speed of 2,700 feet per second, it can even penetrate armored vehicles from distances previously impossible. It can also fire ten rounds in less than ten seconds, which is a new record for the hand sized bullet. There is already huge success in field tests with minimum risk and cost to current soldiers and future ones.

5. Another Thing to Thank George Lucas For
In the days of Ronald Reagan, a Soviet nuclear threat, and “Star Wars,” aka the Strategic Defense Initiative missile defense shield, was a hot button of topic. The technology worked to protect both the future soldier and citizen from incoming missile attacks and even nuclear weapons. It theoretically operates by striking down incoming missiles with a complex system of lasers. Put on hiatus in the 90’s, a growing nuclear threat from Iran, North Korea, and others have once again brought missile defense to the conversation.

6. Look, Ma! No eyes!
Who says you have to see your target to hit it with a cannon? The Non-Line of Sight Cannon (NLOS Cannon) is far lighter and more mobile than a traditional cannon. A sophisticated set of sensors allows it to see enemies and even the launch of an enemy weapon. It can even jam or fire an intercepting projectile. It also has a powerful engine that can do up to 55 miles per hour, which makes it faster than a typical tank. The cannon can also run on battery power for stealth.

7. Activate Force Field
After IED’s, the current soldier’s most common cause of death is projectile weapons and missiles. Developed by Israel, the Trophy system is literally a force field that envelopes a vehicle and protects against an outside attack. Once a weapon is launched, Trophy senses it and brings up an actual force field for the weapon to detonate on. Mike Tobin of Fox News has more.

8. Cut Corners
A stuffed cat has never looked so terrifying. This upcoming device actually allows the future soldier to shoot accurately around corners without so much as exposing an eyelash. The scientist shows how a simple camera and joint can turn the tables in favor of the future soldier. The cat is used for stealth and was inspired by an actual special ops mission. 9. One in a Million
Do you really need to fire one million rounds per minute? If you are a current or future soldier, Metal Storm may just be the answer to the question. Remotely operated, the device can track down multiple targets and use multiple forms of ammunition against it. The video shows a demonstration of the robots firing capabilities. With such a large and fast capacity, Metal Storm might actually be able to replace an entire platoon of an army.

10. Who Needs an Army?
If the electromagnetic rail gun performs as well on the field as it does in the tests, the Navy might become the first and only line of defense the future soldier needs. This rail gun broke records in 2008 when it fired a round at 8,270 feet per second, which translates into 5,640 miles per hour, which is only a third of the gun’s expected capacity. To add to the impressiveness of this upcoming device, it fires electromagnetic rounds which are safer and lighter than traditional gun powder rounds. Most impressive of all was its ability to hit meter long targets with pinpoint accuracy at over 200 miles away.

Hopefully advances in diplomacy and peace building will outgrow the need for the above ten upcoming devices that will protect the future soldier. But as history has shown us, peace and war seem linked and technology is the only proven thing that can and has cut soldier casualties across the centuries and decades.