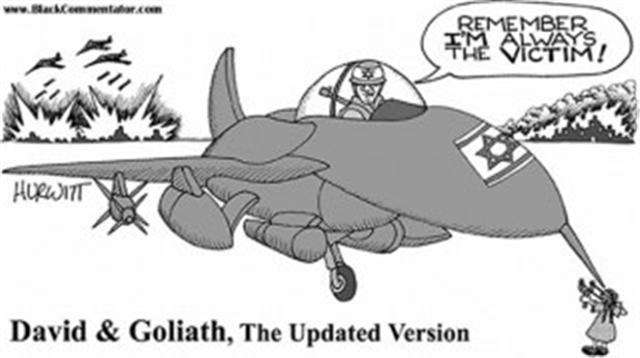 I cannot speak for the situation elsewhere, but in the US, I doubt if there is another definable group that equals or surpasses Jews in their achievements in so many different fields, their support for civil liberties and civil rights, and their philanthropy or general support of charitable causes.

But, when Israel enters the equation, those truly admirable qualities are often set aside. Israeli bigotry, atrocities and crimes against humanity are largely ignored, excused or vociferously supported, and Jewish-dominated institutions such as the mainstream media pointedly refrain from publishing or reporting blatant contemporary examples of Israeli misconduct.

It brought to mind a conversation a few years ago with a Jewish friend whose parents met in a Nazi concentration camp. We were discussing something historical, and she remarked that Jews had been persecuted by almost everyone throughout their history. Said I (paraphrasing), well, what’s wrong with you? Said she, what’s wrong with us ? Sure, I replied, it simply isn’t natural for any people to be so consistently disliked. Look at it in personal terms. If a few people I meet don’t like me, I can easily say the problem is with them. But if virtually everyone I meet hates or despises me, it is pretty hard to escape the conclusion that there is something fundamentally wrong with me, or with how I behave .

The Basis of Anti-Semitism

Now, Jews inveigh often and loudly against Anti-Semitism, which is itself a bit odd, coming from a people whose — well, “Anti-Gentilism” (i.e., everyone else) for lack of a better term — seems embedded in their religion and culture. The Books of Judges and Deuteronomy are awash in bloodshed, with Deuteronomy endorsing the slaughter of people who worshipped a different God. Now, those people were not threatening Jews; they just had chosen a different way to seek answers to the eternal questions of life and death. But to Jews, at least in their core scripture, this sufficed for their extermination, and their livestock and possessions as well. This trait alone would make Jews unwelcome — how many people willingly reside next to their own executioners, simply for the crime of existing?

Then there is the problem of dealing with a people whose religion includes a major holiday — Passover (or Pesach) — based on mass infanticide. True, the side of the Passover coin presented to the world is that of God “passing over” the Jewish homes en route to punish the Egyptians for keeping them in captivity. But the other side of that Passover coin is the punishment itself, the killing on behalf of the Jews of all of the first-born of Egypt: not just of Pharaoh, or of Pharaoh’s priests and ministers and generals, who might reasonably have been held responsible for that captivity, but of the poor peasants and fishermen and even prisoners as well, who had no conceivable role in it at all. Hating people who praise their God for murdering your children is not at all irrational — it would be as if America made the firebombing of Dresden and the nuclear bombings of Hiroshima and Nagasaki into national holidays, and added some divine glorification to it as well. Not pretty, to say the least.

The Three Faces of Anti-Semitism

From this derive the three faces of anti-Semitism, two defined by assorted Gentiles and the third by Zionists. The first is essentially the Roman view, highlighted in the Jewish War that ended in the destruction of Jerusalem and the Second Temple and the dispersal of the remnants of the population. This did not see Jews as the problem, but rather an armed Jewish state — i.e., how Jews collectively behave in an organized polity. Even while the armies of Titus were battering Jerusalem down, thriving Jewish communities existed in virtually every city of consequence throughout the Empire, including Rome itself.

The second defines Jews as a people and as individuals as disposable for any of a variety of reasons. It predominated in much of Christian Europe for centuries (and parenthetically was almost unknown in the Muslim world), and culminated in the Nazi Holocaust. This would make no distinction between an Israel Shamir and a Yitzhak Shamir, or even me; all could go.

And the last form is the so-called “new” anti-Semitism, defined by assorted Israeli governments and Israel’s advocates overseas as any criticism whatsoever of any Israeli domestic or foreign policy, and thus an “existential threat” to Israel itself. This is now the favored usage of the term by Israeli partisans, intended to protect Israel from criticism or sanctions abroad, and to stifle debate over its actions.

Of these three forms of anti-Semitism, the last is an understandable political ploy for a country that cannot survive open disclosure of its attitudes, internal practices and policies. Being nonsense does not make it ineffective, of course, given the extent of its media support and the money poured into political coffers on its behalf.

The second is neither ridiculous nor nonsense. It is an exercise in criminal idiocy that merits condemnation, whether perpetrated by (e.g.) the Inquisition, the Black Hundreds or the Nazi SS.

But the first is on the mark, and the pragmatic Romans got this right. Whether the scriptural affinity for bloody-mindedness reflects the Jewish culture or affected it over time is immaterial. Either way the outcome is an exceptionally nasty people within an armed and independent Jewish state, at least up (or down) there with the Huns and the ancient Assyrians.

The oddity is that as individuals without an organized Jewish state, what one sees is admirable achievements instead of aggressive abominations. Without a Jewish state, the dark side of Judaism has no way to express itself, so the admirable side of the Jewish cultural coin — and there is a great deal to admire — shines instead. Getting there without a catastrophe is our task in the years ahead.