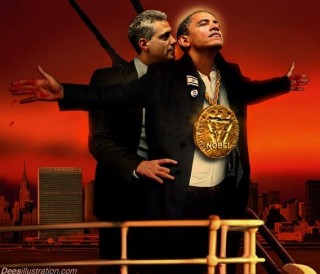 – Steven Thomma has a scary piece in McClatchy Newspapers: Obama enthusiasm fades in unlikely place: Wisconsin.  Emma Connolly, a University of Wisconsin senior who’s majoring in history, is among the discouraged liberals. “When [Obama] first campaigned, I was really impressed,” she said of Obama during an interview in the student union building on the shores of Lake Mendota. “When he came to Madison this fall, I listened and compared the rhetoric to what happened over the last 20 months, and it sounded inauthentic. It’s all about an administration that didn’t come through.”

She won’t turn against the president or his party. However, she wishes he hadn’t continued so many Bush-era security policies that she said threatened civil liberties. She wishes he’d done more to combat global warming. She wishes he’d pushed a more aggressive health care plan. –

MADISON, Wis. — This is not a place where you’d expect President Barack Obama’s hopes of a new liberal era to founder.

The state has a long tradition of leaning left: It’s where Robert La Follette helped usher in the Progressive era, where anti-war protests took hold during Vietnam and where Gaylord Nelson helped create Earth Day and the modern environmental movement.

Two years ago, Obama swept it by a landslide-like 14 percentage points, moving it solidly into his column after years of razor-close wins by Democrats.

Now, thanks largely to the president, the Badger State is leaning right. The turn threatens Democratic Sen. Russ Feingold, one of the Senate’s most liberal members.

If it’s a strong enough tide to endanger liberals or moderates in a state such as Wisconsin, it suggests that Obama’s chance of building an enduring center-left coalition nationwide is at least delayed, and at most dead.

This isn’t what the president envisioned.

“Our campaign was never just about putting one man in the White House,” first lady Michelle Obama said during a campaign stop for Feingold in Milwaukee this week. “It was about building a movement for change millions of voices strong, a movement that lasts beyond one year and one campaign.”

It hasn’t worked in Wisconsin. Liberals are disenchanted. Moderates are turning into conservatives.

“There has been an explosion in the percent of Wisconsinites who call themselves conservative,” said Charles Franklin, a political scientist at the University of Wisconsin-Madison. “It is real, and it has swept across the state.”

A recent McClatchy-Marist poll in the state underscored the dramatic shift in the landscape since the last midterm election in 2006:

More than many other states, Wisconsin illustrates how the nationwide tide has turned against Democrats. Absent that tide, people such as Feingold probably wouldn’t be in this kind of trouble.

Emma Connolly, a University of Wisconsin senior who’s majoring in history, is among the discouraged liberals.

“When he first campaigned, I was really impressed,” she said of Obama during an interview in the student union building on the shores of Lake Mendota. “When he came to Madison this fall, I listened and compared the rhetoric to what happened over the last 20 months, and it sounded inauthentic. It’s all about an administration that didn’t come through.”

She won’t turn against the president or his party. However, she wishes he hadn’t continued so many Bush-era security policies that she said threatened civil liberties. She wishes he’d done more to combat global warming. She wishes he’d pushed a more aggressive health care plan.

She wishes, in short, that he was more like Franklin D. Roosevelt, who in 1933 launched the New Deal to combat the Great Depression and in so doing built a liberal governing coalition that endured for two decades.

If Obama’s let down liberals, his failure to drive down unemployment and federal budget deficits has unified and energized conservatives and turned some moderates into conservatives.

“All this deficit and debt, I don’t see how any organization can sustain that,” said Shannon Clark, a utility manager from Richland Center, Wis. “You can’t borrow your way out of financial trouble.”

“We can credit President Obama with waking people up,” said Robert Cornell, the manager of an electric cooperative who’s from Washington Island.

Wisconsin is better off than much of the country is. Milwaukee factories crank out and export small engines — think lawn mowers and motorcycles — that don’t have as much foreign competition as the U.S. auto industry has. Dairy farming remains strong. The state unemployment rate of 7.9 percent is well below the national average.

Feingold also isn’t as deeply unpopular as some endangered Democrats are. One recent poll found that he still has a higher favorable rating than unfavorable.

He has an independent streak that appeals to Wisconsin voters. He was the only senator to vote against the USA Patriot Act, which expanded law enforcement powers after 9/11. He voted for an independent counsel to investigate allegations of fundraising abuses by the Clinton White House. He was the only Democrat on the Senate Budget Committee in 2002 to support spending caps. He opposed the Wall Street bailout.

Feingold’s opponent, Republican Ron Johnson, a businessman from Oshkosh, said the health care overhaul was one reason he got into the race last spring.

“I’m new to this. Literally six months ago, I was a full-time businessperson,” he told a small group of utility managers this week in tiny Arkdale, Wis.

He said the health care law was a “huge assault on freedom” that he wanted to kill. “I want to see this health care bill repealed before it explodes our deficit, before it destroys not a perfect system but the finest health care system in the world,” he said.

Johnson, an unpolished speaker and a newcomer to politics, found himself instantly competitive against Feingold even though more than 6 out of 10 voters had no impression of him. That, said Franklin at the University of Wisconsin, was the first sign that national forces would overrun the contest.

Feingold says he’s closed the gap and pulled even.

“The race that I’m in remains close,” he said this week. “We have the momentum. We are moving in the right direction.”