Home World MURDOCH: A WAR MONGER AND A FEAR MONGER 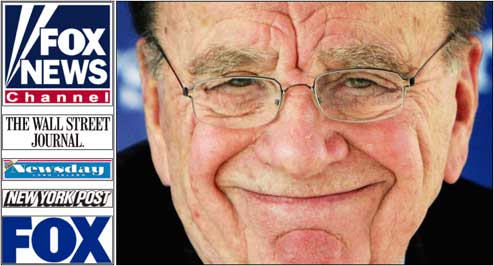 Despite your claims and twisting of the truth, Mr. Murdoch, the threats faced today are not “part of an ongoing war against the Jews.” The threat is the fear mongering which supports your war mongering

Founder, chairman, and chief executive officer of News Corporation, Murdoch owns, among other things, television’s Fox News.  Fox is the TV channel that currently provides a platform for “crazies” and white supremacists like Glenn Beck, Sean Hannity and Bill O’Reilly.  Fox, the News Corp, Murdoch and the Anti-Defamation League (ADL) have been the worst conceivable agents of deception.

In a recent speech at an (ADL) dinner, Murdoch lauds the founding of the ADL “against the backdrop of the conviction and then lynching of an innocent Jew.”   Fear mongering the public attitude that leads to holocausts. How does he do this? He says, “In the century since then, you have fought anti-Semitism wherever you have found it.”  Remember, the message conveys, it was anti-Semitism that supported the Hitlerian hatred of Jews. Building on the theme, Murdoch uses the magical term anti-Semitism 14 times in his speech.  Shades of Hitlerian tactics visit the ADL.

“Not a single person in the room needs a lecture on the evil of anti-Semitism” Murdoch reminds his audience.  Not enough fear-mongering in that? Murdoch adds a clincher: “We live in a world where there is an ongoing war against the Jews.”  Need to arouse more fear among your Jewish audience? Shift from generalized anti-Semitism to “terrorism” and “terrorists”.

“Phase two” Murdoch called it. “Israelis targeted both at home and abroad…The terrorists continue to target Jews across the world.”  Not enough fear aroused yet? “The media…multinational organizations …NGOs” aim to “make Israel a pariah.”

To cap his deceptive campaign off, Murdoch groans that “Israel becomes increasingly ostracized, while Iran–a nation that has made no secret of wishing Israel’s destruction–pursues nuclear weapons loudly, proudly, and without apparent fear of rebuke.”

If his audience believe the lie about Iran loudly and proudly pursuing nuclear weapons, the propaganda machine has been working overtime. The fear mongering comment omitted any truth-telling about the only country in the Middle East that has pursued, built and stockpiled nuclear weapons in well-known silence–Israel.

“Every day,” lies Murdoch, “[Israelis] defend themselves against armies of terrorists.”  If that doesn’t arouse enough fear in his Jewish audience, he adds, US “foreign policy sometimes emboldens these extremists.”

Warmongering requires more, and Murdoch knows it.  He aims to silence liberals who he claims are responsible for “the most virulent anti-Semitism” today. “Often,” he augurs, “this new anti-Semitism dresses itself up as legitimate disagreement with Israel.”

Anyone, right, left or centre who dares to criticise Israel will be branded anti-Semitic.  Murdoch would stop any complaints about Israel decimating Lebanon or destroying Gaza or developing illegal s ettlements in land stolen from Palestinians.  About Lebanon’s decimation, the war ended with Israel’s withdrawal from Lebanon.

Many Jews were not satisfied with that outcome and accused Prime Minister Ehud Olmert of losing the war.  However, when Olmert appeared before the Knesset’s’ Foreign Affairs and Defence Committee, he stated “The claim that we lost is unfounded.  Half of Lebanon is destroyed; is that a loss?”

If Murdoch had his way, to report or comment on this arrogant boast, coming from an Israeli Prime Minister’s mouth, would be dubbed anti-Semitism.  Following a number of swipes at European anti-Semitism, taking specific aim at Norway, Sweden, Britain, Spain and the Netherlands, Murdoch takes aim at Muslims.

He complains, “In Europe today, some of the most egregious attacks on Jewish people, Jewish symbols and Jewish houses of worship have come from the Muslim population.”   Murdoch then bemoans a Swedish mayor’s suggestion that “Jews and Israel were partly to blame themselves.”

By far Murdoch’s most ludicrous argument is that “some Americans have suggested that Washington needs to put some distance between itself and Israel” in order “to gain credibility in the Muslim world.”   His argument?  This would make “hostilities more certain” and “the peace we all want will come when Israel feels secure.”

In Murdoch’s corral, to critique that comment would amount to anti-Semitism.   Finally, the supreme warmonger gets down to war as he sees it. “Right now we have war” he says.

“There are many people waging this war.  Some blow up cafes.” Eh? When was the last time someone blew up a cafe? How many years of Israeli terrorism did it take before a Palestinian blew himself up to send a message to the world?

In the current “war” seen by Murdoch, “some fire rockets into civilian areas.” This wouldn’t be the insignificant responses out of Gaza and Southern Lebanon to Israel’s military might.   Remember Olmert’s boast: “Half of Lebanon is destroyed; is that a loss?” Or is Murdoch referring to the piddling rockets fired from Gaza into land stolen from the Palestinians.

“Some are pursuing nuclear arms,” says Murdoch of the current war. This, of course, is the prime target of Murdoch’s fear and warmongering.   “Bomb, bomb, bomb” as that other infamous warmonger Senator John McCain urged for Iran. This would provide the penultimate pleasure for Israel, the ADL and Murdoch.

Murdoch would eliminate Muslims, wherever possible, Palestinians, who he portrays as terrorists by nature, critics of Israel, who are anti-Semitic because they’re critics, and Iran, who wants nuclear power that represents an “existential threat” to Israel.

Despite your claims and twisting of the truth, Mr. Murdoch, the threats faced today are not “part of an ongoing war against the Jews.” The threat is the fear mongering which supports your war mongering.

Paul J. Balles is a retired American university professor and freelance writer who has lived in the Middle East for many years.  He’s a weekly Op-Ed columnist for the Gulf Daily News.  Dr. Balles is also Editorial Consultant for Red House Marketing and a regular contributor to Bahrain This Month.