Home Economy Veterans Day: How is the War Economy Working for YOU? 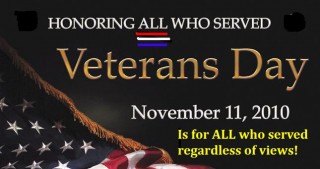 We at VT strive to help those grassroots organizations that know how to connect the dots between America at War and the meltdown of the U.S. Economy do a better job. It is very timely that  VT posted several aspects of this in War and Slaughter as Economic Stimulus

Veterans for Peace (VFP) has lauched a public education campaign in time for Veterans Day to remind American voters of the links between the costs of war and meltdown of the U.S. Economy.

“How Is The War Economy Working For You?” is a national campaign organized by Veterans For Peace. VFP will be asking Americans to ask  themselves and their friends how the occupations of Iraq and Afghanistan and the expanding war in Pakistan are affecting our economy at home.

“How is the War Economy Working For You?” is now an official VFP project!!  Learn more to http://www.wareconomy.org/

VFP’s primary goals are to connect the cost of the ongoing US wars with the collapsing US economy and to present VFP membership and other peace organizations with a powerful and vital campaign to end the Middle East Wars. We will accomplish these objectives by providing both the inspiration and the needed resources to run an effective grassroots campaign along with recruiting new membership to strengthen and revitalize VFP.

The most important thing is to do something! 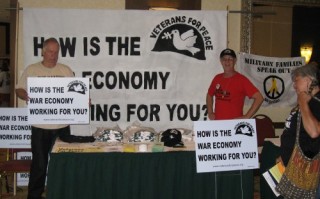 And there are many ways to be involved. The VFP campaign started with an idea, a question, and banner drop in Detroit on a cannibalized high rise building.  After several banner hangings around the country, VFP arrived in Washington. DC at the One Nation Rally on October 2.  It was here VFP and their national campaign took flight in the form of the VFP Peace Blimp and as part of the War is the Obscenity Banner Drop. VFP has also developed a new website, www.wareconomy.org to keep current with the campaign and actions developed by VFP members and Chapters across the country.

WAYS TO GET INVOLVED 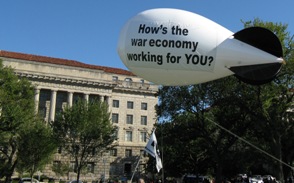 In final analysis, this is a grass roots campaign with many of the tools and resources already in place and more to be developed by anyone of us. The VFP Peace Blimp is available for Chapter use.

Don’t forget the Cost of War brochures which can be downloaded and handed out any time and to carry VFP brochures. Recruiting new members is an important part of this campaign. And please let us know what you are doing and send pictures too. All of our work is important!

Go to www.wareconomy.org for more info.

RECENTLY FROM “HOW IS THE WAR ECONOMY WORKING FOR YOU?” PROJECT:

> Read more about the project’s influence at the Thomas Merton dinner!

Veterans For Peace encourage you to join our ranks.