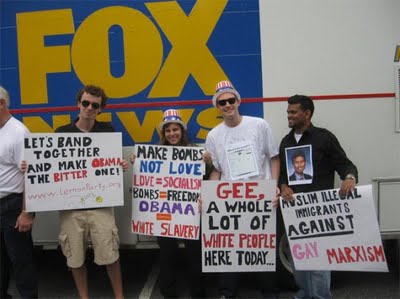 With all the rhetoric and immpassioned pleas for this and for that, at the end of the day, the tea party movement is just plain and simply a White Right movement.

The White Right just don’t want the black guy leading their tribe. It’s just that simple; not complex at all.

This is why we see them all over the ANTI-space.

If Obama is for something, they are against.  If Obama could walk on water, they’d say that’s cause he can’t swim. That’s why there is truly NO coherent principle based direction for this Tea Party because the only real thing they have in common is “no black guy leading their country”.

Granted the shrewd top-o-food-chain Republicans have jumped all over it, but at it’s core is just a plain and simple “we don’t want the black guy ruling us”.  So it will always be just anti-whatever Obama’s for movement.

Over time, it will get morphed into a republican movement always pretending it’s something other than it is was and sheeple will purchase hoping for a better day.  But it won’t come because they will get used again as the power elite have been doing all along.  It’s not a new game all just the same ole power art of war game.

The funny thing is that the Facebook Generation, youth under 25, generally don’t see black, brown, straight or gay.  It’s only the old white people living back in the 20th century who are un-accepting of the future.

Unfortunately for all of us in the forward moving world, we must deal with their old people dangerous hang-ups until that generation dies off (another 10 to 20 years).   After all, dont expect the old to change their ways, they won’t.  They grew up like that and still listen to their old music and old mantras.   They are stuck in the past and the people who will inherit the future need to just move on without them.

But don’t get too comfy yet. In the short run, the people who are moving forward still need to dig in because these people are determined fighters.  They will fight to the death on this and you can bankster on it.  It truly is personal for them and when you’re dealing with that kind of emotion, watch out, they will play to kill.

So don’t be naive.  They will NOT go down without a fight.  Make no mistake about it, they are at war with the future.  The majority of the populace who are unaware of this Teabagger War against the future sometimes misread what they say and stop watching what they do.

But in the end, it won’t matter at all because time will NOT forgive the White Right.

The time train is always moving.  And if one does NOT grow and evolve, the non-partisan unbiased TIME TRAIN will leave the molded and unpliable back at the history station under the rest of the unenlightened garbage of the past.

And that is where this Tea Party White Right will end up.  There is no question about it. It’s just a matter of time.