If you hear someone say they have an abscess tooth, you understand how much pain they are in even if you’ve never had one, you have had a tooth ache.

If you hear someone say they have a sinus infection, you understand how much pain they are in with the pressure building in their head and their body is drained of energy.

Even if you have managed to escape these problems you can understand because we talk about them making them so common, the level of pain is associated with our own common experiences. Yet if someone says they are suffering because they were in the military, we tend to not connect to their experiences, avoid conversations and feel as if there is no way we can ever understand what it is like for them. The truth is, we can all understand it once we think of what we have in common with them.

Look at this picture and you see a grunt gently holding a fellow warrior’s head in his arms. There are many moments of gentleness in combat. Love and compassion do live on even in the atmosphere of brutality. People don’t just die in war. They are shot. They are blown up. Even in the midst of this there are still moments when the human spirit rises above it all.

We can understand these acts of compassion and grieving once we remember what it was like to have someone we love pass away. We know what it is like to have them in our lives one moment and then suddenly gone. Know how our lives change when we cannot call them, visit them or when holidays come around and they are not at the table with us, there is nothing we can buy for them for Christmas and no more birthdays to celebrate with them. We can understand once the warriors we send into combat become human in our eyes again.

It affects veterans of all wars, likely one you know personally

WENATCHEE — A car backfires on the street and several people look curiously in the direction of the sound. Others ignore the loud pop completely, their minds automatically deleting the sound as road noise.

But for one man — a combat military veteran — the sharp report signals danger. He jumps at the sound and looks for cover from a possible sniper aiming at him from a rooftop or crouched behind a vehicle. Adrenalin surges through his body as he prepares to defend himself from attack. His mind races through gruesome scenes of combat that once were his reality. 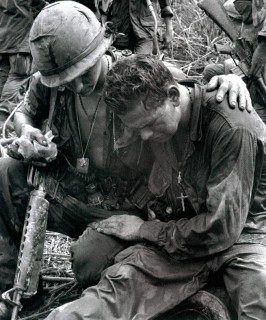 For a combat veteran with post-traumatic stress disorder — PTSD — a backfire or any sudden loud noise can bring unwanted memories of war as if they were happening all over again. A crowded supermarket could be an invitation and perfect cover for a suicide bomber. The sound of a helicopter or airplane could bring a flashback of bombing raids. A calm walk in a forest might remind him of an ambush in a Vietnam jungle.

Health care workers say — acknowledged by the U.S. military — that PTSD is a huge problem nationwide as soldiers — both men and women — return from combat and other stressful situations in the nation’s longest war. It’s not just soldiers serving since wars in Afghanistan and Iraq began in 2001 who are affected. PTSD — a term unknown until the 1980s — has taken a toll on veterans of all wars.

Thousands of veterans serving in World War II, the Korean War, in Vietnam and other wars are still dealing with the invisible scars, if not open wounds, of their military actions. Recent Army studies found that about 15 percent of all soldiers suffer from PTSD sometime in their lives. The figure is much higher, however, for those who actually saw combat, say mental health care workers. Most cases, they say, will probably never be diagnosed.
PTSD the invisible wound

Will we understand what it is like to risk our lives in combat? Not unless we went but many of us know what it is like to set ourselves aside for the sake of someone we care about. How many times have you stayed up with a sick friend or troubled, needing to talk? How many times have you done without something just because someone you cared about needed something else more? Well for the men and women we send into combat, they set themselves aside for the sake of the men and women they serve with, to accomplish the missions they are given as well as possible and to try to get as many back home as they can. This we can understand if we try.

When it comes to PTSD itself, we can understand that too. Think about a traumatic event in your own life. A car accident, someone you loved dying suddenly, a fire, hurricane, tornado, crimes or abuse from someone. Take that pain and then remember what it felt like. Then take that pain, wondering what it would be like if those experiences repeated themselves for a an entire year when you could not escape any of it. This is the way we understand what we have in common with them and then they are not so strange to us.

This is the way we stop blaming them for the way they act. This is how we also help them heal. When they feel as if they have nowhere to turn, no one to talk to, no one able to help them feel “normal” again, then they retreat into the abyss. Anger takes hold because it hurts less to be angry blaming someone else for their pain. They self-medicate because they want to stop feeling that wordless depth of pain. They push people away because caring opens the door for more pain. They avoid getting help because they convince themselves they are beyond help after the way they were pushed away from people in their lives.

None of this has to happen. All we have to do is take what we know about being human, see what we have in common with them and then understand what it would be like for us after what they went through. Can we help them heal? Absolutely! After all, it is not what makes them uncommon leading them to suffer, but what we all have in common that that will help us understand and help them feel as if they “fit” in again.