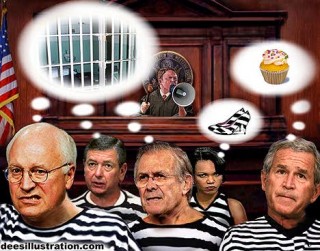 The Trial is a novel by Franz Kafka, first published in 1925. One of Kafka’s best-known works, it tells the story of a man arrested and prosecuted by a remote, inaccessible authority, with the nature of his crime never revealed either to him or the reader.

The theme developed a familiar ring to it following the imprisonment of “enemy combatants” in Guantanamo.  Echoes of such places come from another Kafka story, “In the Penal Colony”, where everyone is guilty simply because they’re there. If they weren’t guilty, they wouldn’t be there.

This was the kind of assumption made by the torturers at Abu Ghraib or the jailers in secret CIA prisons around the world or the guards at Guantanamo.  You can be sentenced without trial or defence.

“In the Penal Colony” describes the last use of an elaborate torture and execution device that carves the sentence of the condemned prisoner on his skin in a script before letting him die, all in the course of twelve hours.

“It’s a remarkable piece of apparatus,” says the officer “In the Penal Colony” to the explorer and surveyed with a certain air of admiration of the apparatus which was after all quite familiar to him.

“In any case, the condemned man looked so like a submissive dog that one might have thought he could be left to run free on the surrounding hills and would only need to be whistled for when the execution was due to begin,” says the story’s narrator”

One can easily imagine the jailers at Abu Ghraib making such psycho comments as they attached electric wires to their prisoners’ fingers or forcing a prisoner to remain nude while dogs attacked him. 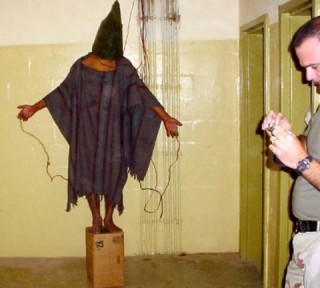 That was when cell phones and camcorders made it possible to record the sick psychotic joys of torturing for jailers or their remote commandants.

As for commandants, G W Bush recalls in his memoir that when the CIA asked him whether they could proceed with waterboarding of Khalid Sheik Mohammed, the alleged plotter of the 9/11 attacks, Bush replied “Damn right,” reported The Washington Post.

It’s Kafkaesque to imagine this scenario in Guantanamo as they set up the waterboard to nearly drown their captives. CIA interrogators used the controversial waterboarding technique 183 times on Khalid Sheikh Mohammed.

Former Vice President Dick Cheney has also acknowledged supporting torture. “I was a big supporter of waterboarding,” he boasted in a television interview in February.

One must wonder whether they were enjoying, like Kafka’s officer or commandant, remote thoughts about their minions inflicting pain on untried “enemy combatants”.

On November 5th Al Jazeera reported that Council members in Geneva, Switzerland, levelled a barrage of criticisms at the US administration calling for the closure of the Guantanamo Bay prison and for investigations into alleged torture by US troops abroad.

Torturing untried prisoners is by no means an exclusive province of America. On November 6th, the New York Times reported that a lawyer for 200 Iraqis demanded a public inquiry into what they described as brutal mistreatment by British soldiers in a secret detention centre near Basra.

The lawyer “told the High Court in London on Friday that the abuse amounted to ‘Britain’s Abu Ghraib.’ The assertion was buttressed with video recordings.”

Echoes of Kafka, Abu Ghraib, Guantanamo and the CIA’s black holes of extraordinary rendition reverberate from the UK.

The US administration continues to deny that torture is torture. “Let there be no doubt, the United States does not torture and it will not torture,” says Harold Koh, legal adviser at the US State Department.

Kafka should be a must read for all government officials, prison staff, members of the military and responsible citizens.