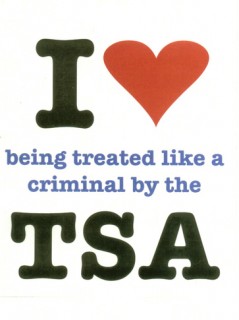 The head of the Transportation Security Administration on Sunday acknowledged that new full-body scanners and thorough pat-downs can be invasive and uncomfortable, but he said that the need to stay a step ahead of terrorists rules out changes in airport screening procedures.

John Pistole told CNN’s “State of the Union” that, despite the public uproar over new screening techniques, “we are not changing the policies” that he said were the best ways of keeping the traveling public safe. TSA screeners, he said, are “the last line of defense” in protecting air travelers.

Obama said he had told the agency that “you have to constantly refine and measure whether what we’re doing is the only way to assure the American people’s safety.”

Secretary of State Hillary Rodham Clinton said she thought “everyone, including our security experts, are looking for ways to diminish the impact on the traveling public.” She told NBC’s “Meet the Press” that “striking the right balance is what this is about.”

However, when asked on CBS’ “Face the Nation” if she would submit to a pat-down, Clinton responded: “Not if I could avoid it. No. I mean, who would?”

But Pistole stressed that that balance now requires steps to confront “a determined enemy” that has proven adept in devising new ways to conceal weapons. “We know through intelligence there are determined people, terrorists, trying to kill not only Americans but innocent people around the world,” he said.

Pistole was shown videos of people being patted down where the screeners touched the breasts of a woman, felt into the pants of another person and felt the crotch of a man. He said all three cases were proper and that the gloves of the screener who felt inside the pants were then tested for explosive trace residue.

A Nigerian man was accused last Christmas of trying to set off a bomb hidden in his underwear aboard a flight from Amsterdam.

“Clearly it’s invasive, it’s not comfortable,” Pistole said, while adding that very few people receive the pat-down. People who go through the new advanced imaging machines available at some 70 airports are usually not subject to pat-downs, he said.

Passengers have also objected to the advanced imaging machines because they produce a virtually naked image of the person’s body. The screener, who sits in a different location, does not see the face of the person being screened and does not know the traveler’s identity.

“Clearly, if we are to detect terrorists who have proven innovative, creative in the design and implementation of bombs that are going to blow up airplanes and kill people, we have to do something to prevent that,” Pistole said.