“Freedom triumphant in War and Peace” is a nice thought but often impossible to find, yet we are only willing to glorify the victories while avoiding any unpleasantries connected to combat. 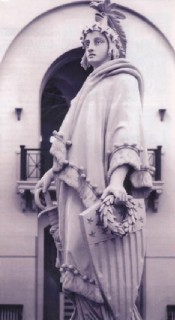 The bronze Statue of Freedom by Thomas Crawford is the crowning feature of the dome of the United States Capitol. The statue is a classical female figure of Freedom wearing flowing draperies. Her right hand rests upon the hilt of a sheathed sword; her left holds a laurel wreath of victory and the shield of the United States with thirteen stripes. Her helmet is encircled by stars and features a crest composed of an eagle’s head, feathers, and talons, a reference to the costume of Native Americans. A brooch inscribed “U.S.” secures her fringed robes. She stands on a cast-iron globe encircled with the national motto, E Pluribus Unum. The lower part of the base is decorated with fasces and wreaths. Ten bronze points tipped with platinum are attached to her headdress, shoulders, and shield for protection from lightning. The bronze statue stands 19 feet 6 inches tall and weighs approximately 15,000 pounds. Her crest rises 288 feet above the east front plaza.

A monumental statue for the top of the national Capitol appeared in Architect Thomas U. Walter’s original drawing for the new cast-iron dome, which was authorized in 1855. Walter’s drawing showed the outline of a statue representing Liberty; Crawford proposed an allegorical figure of “Freedom triumphant in War and Peace.” After Secretary of War Jefferson Davis objected to the sculptor’s intention to include a liberty cap, the symbol of freed slaves, Crawford replaced it with a crested Roman helmet.

When their bodies return home in a casket with a flag over it, concealed under it is our guilt. Some show up to “pay their respects” as a funeral procession slowly moves down the street but more people are annoyed having to wait for the last car to pass so they can get on with what they want to do, never once considering the soldier’s life was ended for their sake. The dead can ask no more of us.

Thousands of veterans come home each year. We avoid them. We expect them to just get on with their lives, go back to “normal” and stand on their own two feet. Politicians seem to remember them a few times a year. Memorial Day they make time to honor the dead and on Veteran’s Day they manage to make great speeches because another election is coming up but when it is time to take care of them for real, prove how grateful they are, suddenly there is just not enough money in the budget for them.

The tax payers, already disenchanted, want to have their own problems taken care of. They paid little attention to the troops when they were away so there is no moral obligation to pay any attention to them when they return. The Department of Defense is off the hook as soon as they are discharged and the VA suffers from lack of planning. While the government is busy planing to get the troops to where they want them to go they are lousy at planing for them coming home. Basically the troops are screwed and the veterans, no longer of service, are doomed.

What do we do about this? Do we leave the one percent solution to our security to fend for themselves or do we put in as much effort training them to come home as we do sending them into combat?

They get basic training to adapt from civilian life when people are not supposed to kill other people into being able to pull the trigger. Their bodies are trained to endure hardships. Their minds are trained to follow orders. They become battle ready. No one trains them to go back to “civilian” when their jobs are done.

Families are prepared for them to leave. They know while the soldier is deployed any day can bring the strange car in the driveway. It is just all a part of being in a military family. No one prepares them for when the soldier comes home changed by all he/she has seen or had to do.

There is a lot of talk about mandatory mental health testing but no matter how long they have tried this, the numbers of suicides along with attempted suicides go up. There is even more talk about overcoming the stigma of PTSD but the other side of the coin shows that there are still many int the military feeding the stigma instead of defeating it. No matter how many programs the DOD comes up with, the numbers are showing they’ve been dead wrong on how they have responded to this battle with this unseen enemy force.

No soldier is deployed to risk their life without completing basic training and no soldier should return after combat without completing basic training to live. This isn’t rocket science but common sense as humans responding to the abnormal world of warfare. Humans are not supposed to be subjected to traumatic events over and over again. We can understand when a civilian changes after traumatic events in their own lives but when it comes to soldiers, they are unable to put themselves in the same position because it is simply beyond the ability of their own imaginations. They need to see themselves as unique to the general population but commonly bonded to those they served with. There is a lifting of the spirit when a veteran hears another veteran talk about the things they brought home with them. They realize there is someone else knowing what they feel but above that, the other veteran is unashamed to admit to it.

It is a basic human need to be able to connect to others and when we do, we heal. The soldiers are not so much different than the rest of us in that respect. They need to know they are not alone, no need to feel ashamed of being able to feel the damage done within them any more than they should feel ashamed of risking their lives. They need to be with others in a group just as they were when they were training to go.

For the National Guards as Reservist, they have a harder adjustment back to civilian because they do not return to bases but back to the communities where no one seems to be able to even try to connect to them. Families are glad they are back home but they want life to go back to normal as soon as possible, so they avoid any discussion about what happened or what is going on inside of their veteran. They have no place to turn to.

We need a new rule that no soldier goes home after combat until they are trained to do it with the same kind of support they had to go. Families have to have basic training to help the soldier heal. Until we change the way we bring them home, we will see the numbers continue to go up while more die after combat than during it. In war, they die but in peace they should live.