Unfortunately the reality that was the basis of the original Boston Tea Party has been forgotten in the latter-day protests. 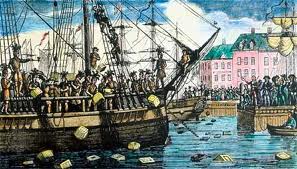 If the Tea Party rally in America represented a sane, honest, non-violent revolution, it could make a lot of sense as a populist movement.

Unfortunately, it’s been spearheaded by a psycho and supported by what some have labelled “wing nuts” – a current brand name for crazies and the brainless.

The name “Tea Party” alludes to the Boston Tea Party, a 1773 incident when American colonists destroyed British tea rather than pay what they considered a tax that violated their right to “No Taxation without Representation.”

About the current Tea-Partiers, pollster Scott Rasmussen says, “They think federal spending, deficits and taxes are too high, and they think no one in Washington is listening to them, and that latter point is really important.”

Expressed concerns by Tea Party supporters have included cutting the size of government, lowering taxes, reducing wasteful spending, the national debt and federal budget deficit, and adherence to an “originalist” interpretation of the United States Constitution.

Headlining an article by Matt Taibbi, Alternet writes “By rallying behind dingbats and morons like Palin and Michele Bachmann, the Tea Party has made anti-intellectualism its rallying cry.

Taibbi writes, “…movements like the Tea Party more than anything else reflect a widespread longing for simpler times and simple solutions.” Unfortunately, as he also points out, we’re living in an extremely complex world where there are no simple solutions.

An honest populist movement could find many things wrong with the way things go in American politics, but they won’t with some of the brainless ideas reflected in the signs they carry.

There’s nothing honest in the palaver mouthed by the self-appointed titular organizer of the movement, Glenn Beck at Fox News.

Most of the expressed concerns by those identified with the movement are related to domestic politics. An honest populist movement would incorporate foreign affairs.

Unfortunately the reality that was the basis of the original Boston Tea Party has been forgotten in the latter-day protests.

In the original rallies, America was accused of being the sycophant to the British king.  The refusal to pay any more to the British monarch provided the impetus for the American Revolution.

If American patriots looked closely today at its sycophantic behaviour, they would absolutely refuse any further activity as lackey, minion, parasite or puppet to Israel.

Who were Americans paying homage to when they refused to stop Israel bombing Lebanon’s civilian infrastructure and civilian neighbourhoods?

American taxpayers were paying for the military hardware as they have as a regular lackey to Israel’s slaughtering campaigns like the carnage in Gaza.

Paul Craig Roberts described how “Nothing has been spared. Not the hospitals, the university, nor the children.” Thank you, American taxpayers.

Where were the Tea Partiers when Lebanon and Gaza were being destroyed with US taxpayer money?

If you supported the carnage of Lebanese and Palestinians, be honest and admit that taxes for Israel are more important than the unemployed in America.

Those who have followed real truth-seekers now know that the Iraq war, costing millions of Iraqi lives and thousands of American casualties along with trillions of taxpayer dollars was based on Israeli deception.

False intelligence and propaganda from Israel cost American taxpayers a fortune. The only beneficiary? Israel.

Why haven’t Bush and Cheney and their Israeli neocons been brought to trial for war crimes?

Aren’t Obama, his administration and Congress equally minions of Israel? If not, why pay taxes without representation?

Would you prefer to fight against taxes for wealthy Americans, sacrificing the unemployed, mortgage holders, home foreclosures from a crooked banking system, health care, education?