Home Veterans WE THOUGHT WE WERE FREE 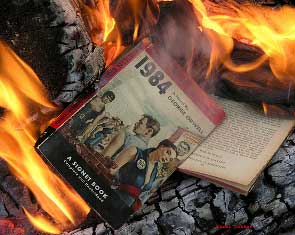 George Orwell’s 1984 revealed that the key to social control is a never ending war, such as Afghanistan; for it keeps the masses fearful, silenced and obedient as there freedom and civil liberties gradually vanish.

In that regard, as I watch the TSA security fiasco unfold as well as George W Bush’s book tour where he rationalizes his illegal war and economic rape of Iraq as well as justifying torture as a means to this criminal end ~ I think of Milton Mayer’s classic “They Thought They Were Free”  (The Germans 1933 – 1945).

Mayer’s book describes the slow but sure seduction of the people as their liberties, freedoms and moral values were gradually stripped away by Hitler’s fascist government while waving the flag of national security and patriotism.

And their sense of identification with Hitler, their trust in him, made it easier to widen this gap and reassured those who would otherwise have worried about it … this separation of government from people, this widening of the gap, took place so gradually and so insensibly, each step disguised (perhaps not even intentionally) as a temporary emergency measure or associated with true patriotic allegiance or with real social purposes. And all the crises and reforms (real reforms, too) so occupied the people that they did not see the slow motion underneath, of the whole process of government growing remoter and remoter.”

Apathy sets in with each step, as it most certainly has in America, and Mayer knowingly describes the consequences for Germany in the early 1930’s~

“In between come all the hundreds of little steps, some of them imperceptible, each of them preparing you not to be shocked by the next. Step C is not so much worse than Step B, and, if you did not make a stand at Step B, why should you at Step C? And so on to Step D ~ and one day, too late, your principles, if you were ever sensible of them, all rush in upon you.

The burden of self-deception has grown too heavy, and some minor incident, in my case my little boy, hardly more than a baby, saying ‘Jewish swine,’ collapses it all at once, and you see that everything, everything, has changed and changed completely under your nose. The world you live in ~ your nation, your people ~ is not the world you were born in at all. The forms are all there, all untouched, all reassuring, the houses, the shops, the jobs, the mealtimes, the visits, the concerts, the cinema, the holidays.

Now you live in a system which rules without responsibility even to God. The system itself could not have intended this in the beginning, but in order to sustain itself it was compelled to go all the way… You have accepted things you would not have accepted five years ago, a year ago, things that your father, even in Germany, could not have imagined … Suddenly it all comes down, all at once.

And that is Mayer’s main point ~ it is the spirit that dramatically changes when we accept if not condone the disintegration of our national moral values through illegal wars and occupations as well as crimes against humanity such as torture, secret renditions as well as intrusive full body scans and pat downs, which will soon be extended to trains, boats, schools and court houses.

What is the Cheney/Bush and now Obama/Biden administration afraid of?

They are obviously afraid of the Truth and, in particular, an informed public in possession of the truth.
We thought we were free but, in reality, like the Germans in the 30’s, we are being manipulated and conditioned by fear to slowly give up our rights, liberties and freedom ~ and all in the name of National Security.

If you’re not concerned, you’re on life support.

Read More Excerpts from the Book “They Thought They Were Free

About the Author:  Allen L Roland is a Freelance Alternative Press Online columnist and psychotherapist.  He  is also available for comments, interviews, speaking engagements and private consultations.   Contact him via email at [email protected]