Home World WHAT WE MUST DO FOR IRAQ NOW!! 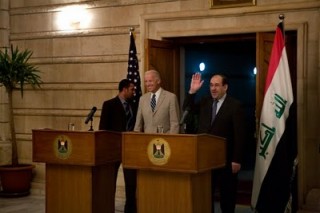 Under this title, American Vice-President Joseph Biden wrote an op-ed in The New York Times on November 20, 2010 coinciding with a NATO summit aimed at confronting the rest of the world, a European endeavor to salvage Ireland and with American incentives to Israel to freeze settlements (in reality ethnic cleansing against the Palestinians) for three months only. The deal in itself constitutes a shift that demonstrates the extent of Israeli control of American decision making on the Middle East.  Mr. Biden wants to conclude that Iraq is a country consisting of conflicting and warring factions, that the recent agreement of the parties to form a government in Iraq came as a result of concerted efforts on the part of the United States which does not want to exclude or marginalize anyone.

The actual reality, however, is that the United States has marginalized Iraq as one of the richest and most ancient countries of the Middle East. The American invasion of Iraq is something that Mr. Biden did not mention. Reading the article, one is bound to feel that the United States is the power which created oil under Iraqi soil, endowed it with civilization, moulded its people to become decent human beings, and will continue to do so until Iraq becomes capable of survival after seven years of destruction and terrorism inflicted by the American war on Iraq. Naturally, Mr. Biden does not identify those who caused the war or those responsible for waging and sustaining it.

So, in order to unleash the Iraqis’ potentials and talents, the United States, according to Biden, is not withdrawing from Iraq, but “rather, the nature of our engagement is changing from a military to a civilian lead”. For the 50,000 soldiers remaining until 2011 have a new task which is advising and assisting their Iraqi counterparts.

At the same time, Biden writes: “Meanwhile, we are establishing a diplomatic presence throughout the country and, under the terms of our Strategic Framework Agreement, building a dynamic partnership across a range of government sectors, including education, energy, trade, health, culture, information technology, law enforcement and the judiciary.”

The remarkable thing here is that education takes priority over energy, trade and the rule of law, because the objective is to effect a drastic change in the vision and identity of future Iraqi generations so that they grow up accepting, through brainwashing processes, this new form of neo-colonialism, which planned, before the invasion, subjugating Iraq and blundering its resources for centuries to come. In order to camouflage this neo-colonialism, the Americans use terms like “providing intensive assistance”, “sustained American presence” in Iraq, plans for modernizing Iraqi security forces and funding the police force, and providing all this assistance to security forces through civilian efforts led by the State Department. This means that the responsibility for the occupation of Iraq is shifting from the Pentagon to the State Department, which, in turn, coordinates the efforts of using education, the judiciary, health and energy in order to colonize Iraq in accordance with modern methods. Biden concludes by writing that the cost of the war has been very high for America; for 4,430 American soldiers have paid with their lives for it.

Of course, the price paid by the Iraqis is of no consequence to Biden. What does it mean for him, or for his administration, that a million Iraqis have been killed, wounded and tortured. That is why we find him ignoring all this price. Biden stresses that it is in the United States’ real interest to maintain the gains made by Iraq. Of course he means the gains made by the United States in Iraq.

The main objective of the Bush administration’s invasion of Iraq, spending billions and sacrificing thousands of Americans for that end, is to turn Iraq into a satellite and a major base for the United States in a region of vital importance for the United States. This importance is a code name for protecting Israel’s security. This is the objective of invading Iraq, destabilizing Yemen, Somalia, Sudan, Lebanon and others.

What do those who theorize for the West’s impartiality say to Joseph Biden who explains the United States’ objectives and interests in Iraq without showing in his article any trace of the Iraqi people, their interests and the hefty price they paid to achieve the vital American policy objective in the Middle East – protecting Israel’s security?

We know, of course, that it is not the task of the American Vice-President to think of the interests of the Iraqi people; neither is it shameful for him to declare the United States objectives. The question is, however, where is the official Arab regime in relation to this neo-colonialism whose dangers on Arab national security have become abundantly clear.

All the Arabs, regimes and peoples, governments and opposition, politicians and intellectuals, have seen how the NATO summit has closed cold-war shops and declared unequivocally an alliance between Europe, the United States and Russia in the face of the terrorist threat, which is the expression currently used to transform Muslims into targets of their wars and neo-colonialism. What is the Arab stand in relation to the birth of this new world which declares its hostility openly and threatens us directly?

The real independence for the Arabs is achieved through science and achieving progress in the field of public participation through the appropriate form of political democracy. Arab solidarity and harmonizing efforts constitute the only way to address the weaknesses of the Arabs and protect them against the dangers of neo-colonialism. If some people do not realize the importance of closing ranks, let them look to Europe, America and Russia. Let them see what Israel and the United States are doing in terms of exchanging roles and interests. Let them remember what Mr.  Biden has said about our region which he considered “a vital strategic region” for the United States, because its ally and our blundered oil happen to be in it.

Prof.  Bouthaina Shaaban is a Political and Media Advisor at the Syrian Presidency, and former Minister of Expatriates.  She is also a writer and professor at Damascus University since 1985. She has a  Ph.D. in English Literature from Warwick University, London. She was the spokesperson for Syria. She was nominated for Nobel Peace Prize in 2005.