Home Veterans This is what the ACLU wants to protect?

The ACLU wants to make sure everyone’s right to speak freely is protected and that is a good thing. It comes with a price to be paid in order to do it. When groups like Westboro get to say what they want we all get to say what we want. The problem is the ACLU wants to defend Westboro’s desire to protest at funerals. They don’t seem to find it an equal issue to protect the rights of the families. 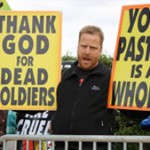 December 6, 2010 9:37 p.m. EST
STORY HIGHLIGHTS
NEW: Church leader says “God is going to kill him” if the armed vet tries to stalk them again
Retired Sgt. Ryan Newell, 26, of Kansas lost both legs to an improvised bomb in Afghanistan
Westboro Baptist Church says U.S. military deaths are God’s punishment for homosexuality
Last week, Newell was charged with stalking church members and the family that runs church
(CNN) — A 26-year-old double-amputee war veteran has been charged with stalking members of the Kansas-based Westboro Baptist Church, which holds demonstrations at soldiers’ funerals to assert those deaths are God’s punishment for America’s “sin of homosexuality.”
Retired Sgt. Ryan Newell of Marion, Kansas, a turret gunner who lost both legs to an improvised bomb in Afghanistan in 2008, is being held in Sedgwick County, Kansas, in lieu of $500,000 bail, and defense attorney Boyd McPherson was negotiating with prosecutors Monday to reduce the bail, he told CNN in an interview.
Newell, his wife, Carrie, and their four children were the subject of local media attention when the national nonprofit Homes for Our Troops constructed a new house for the family this year.
Since Newell’s arrest last week, McPherson’s office has been inundated with phone calls and e-mails from supporters of Newell or opponents of the Westboro Baptist Church, led by Pastor Fred Phelps of Topeka, Kansas. click link for more

So now a combat veteran who gave up his legs is now being charged with stalking but the Westboro group has not been charged when they keep showing up at funerals? They read the newspapers and show up at the funerals, unwelcome, wait for the families to show up and then attack them with their screeches and disgusting signs. They proudly declare they thank God soldiers are dying. But with all of this, they are allowed to keep doing this while a man who will live the rest of his days missing his legs has to defend himself against stalking them?

They should have a right to do what they want with their signs and do it where they want but not when it comes with a price other people have to pay. Let them show up on any street so they can be ignored because people have a right to not have to look at them or hear them but families have to be where they are to bury their dead! They should be allowed to do it without being stocked and this veteran would have had no need to try to do something about it.