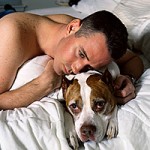 In my work with veterans with PTSD, both individually and group, I have proven that a heart centered approach is the missing link in their self healing process. In that regard, pets are often effective reservoirs of unconditional love which can penetrate the deepest walls of anger, guilt and shame and awaken a closed heart that longs to love and be loved: Allen L Roland

In my ongoing work with Veterans with PTSD I concentrate on waking their closed hearts by helping them see their lives as a quest and how every love relationship, regardless of the pain involved, has been a gift in their common journeys to find their authentic self. See Band of Brothers #2

One of the members of the group re-opened his heart when he remembered a dog he had deeply loved during a heart opening exercise. His face immediately changed and an inner light went on as he described his relationship with his beloved dog. That heart connection was a key step for him in realizing he had another choice in his life versus living in a loveless dark cocoon of fear, shame and guilt.

Those who we love deeply become part of us forever and that certainly includes our animals and pets ~ who often are the only safe refuge for an emotionally alone person ~ and most certainly a lonely veteran with PTSD. I will always affectionately remember my cocker spaniel INKY ~ who I eventually took to college with me and he became the beloved pet of my fraternity.

Pets are often reservoirs of unconditional love which are more than capable of penetrating a closed heart of a veteran with PTSD and facilitating the self healing process ~ which is futile without a heart centered approach.

Time.com featured an article on December 5th on this very same subject ~ BRINGING DOGS TO HEAL; CARE FOR VETERANS WITH PTSD wrotten by Mark Thompson

Excerpts: “One of the leaders of this movement, Dave Sharpe, 31, was so traumatized during deployments to Saudi Arabia and Uzbekistan that his anxiety and recurring nightmares kept him largely confined to his Yorktown, Va., home. “I was always looking for a fight,” he says. “I was beating on the walls.” But he says all that changed when a friend encouraged him in 2002 to visit an animal-rescue shelter, where he spied 2-month-old Cheyenne.

Not long after he adopted the brown and white pit bull mix, Sharpe had another dream about the Taliban sympathizer who pulled a gun on him. When Sharpe woke up in a cold sweat, the dog was watching him. “What are you looking at?” he recalls yelling. Cheyenne barked in response, and after he told her to shut up, she barked again, prompting him to wrap her in his arms, collapse on his bed and tell her everything that was weighing on his mind. “I just lost it,” he says. “I have no idea why, but I felt completely at ease.”

Dave felt completely at ease because he felt unconditionally loved by his dog and allowed himself to feel the pain that was keeping him from not only accepting that love but also extending it.

Here’s a must see five minute video of Dave’s and other PTSD Vets heart centered connection to their pets.

There is no true healing without the heart, which I prove every day in my work, for beneath our deepest pain and fear, is a Unified Field of love, joy and soul consciousness. And our pets are part of that thread of all sustaining beauty which runs through all and doth all unite.

ONLY LOVE CONNECTS AND HEALS

Ream more at:  Bringing Dogs to Heal:  Caring for Veterans with PTSD

About the Author:  Allen L Roland is Freelance Alternative Press Online columnist and psychotherapist.  Allen L Roland is also available for comments, interviews, speaking engagements and private consultations.  He is also a practicing psychotherapist, author and lecturer who also shares a daily political and social commentary on his weblog and website at www.AllenRoland.com.   He also guest hosts a monthly national radio show TRUTHTALK on www.conscioustalk.net