Editorial note:  For a recent review of the Wikileaks controversy, PRESS ME NOW UPDATED!

“Assange met with Israeli officials in Geneva earlier this year and struck the secret deal. The Israel government, it seems, had somehow found out or expected that the documents to be leaked contained a large number of documents about the Israeli attacks on Lebanon and Gaza in 2006 and 2008-9 respectively. These documents, which are said to have originated mainly from the Israeli embassies in Tel Aviv and Beirut, where removed and possibly destroyed by Assange, who is the only person who knows the password that can open these documents, the sources added.”

We should obviously all support WikiLeaks and its founder and spokesperson, Julian Assange, who has just been arrested in Britain, in this dirty war by states around the globe against transparency and openness. But in the world of politics, sadly, things are never as innocent as they appear. According to new revelations, Assange had allegedly struck a deal with Israel before the recent ‘cable gate’, which may explain why the leaks “were good for Israel,” as the Israeli prime minister put it. 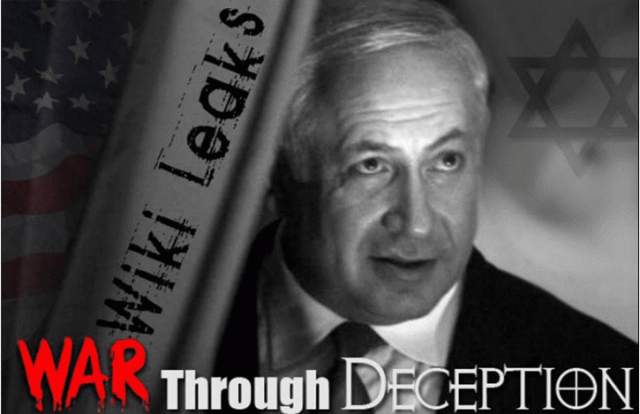 A number of commentators, particularly in Turkey and Russia, have been wondering why the hundreds of thousands of American classified documents leaked by the website last month did not contain anything that may embarrass the Israeli government, like just about every other state referred to in the documents. The answer appears to be a secret deal struck between the WikiLeaks “heart and soul”, as Assange humbly described himself once [1], with Israeli officials, which ensured that all such documents were ‘removed’ before the rest were made public.

According to an Arabic investigative journalism website [2], Assange had received money from semi-official Israeli sources and promised them, in a “secret, video-recorded agreement,” not to publish any document that may harm Israeli security or diplomatic interests.

The sources of the Al-Haqiqa report are said to be former WikiLeaks volunteers who have left the organisation in the last few months over Assange’s “autocratic leadership” and “lack of transparency.”

In a recent interview with the German daily Die Tageszeitung, former WikiLeaks spokesperson Daniel Domscheit-Berg said he and other WikiLeaks dissidents are planning to launch their own whistleblowers’ platform to fulfil WikiLeaks’s original aim of “limitless file sharing.” [3]

Mr Domscheit-Berg, who is about to publish a book about his days ‘Inside WikiLeaks’, accuses Assange of acting as a “king” against the will of others in the organisation by “making deals” with media organisations that are meant to create an explosive effect, which others in WikiLeaks either know little or nothing about. [4]

Furthermore, Assange’s eagerness for headline-grabbing scoops meant that WikiLeaks had not been able to ‘restructure’ itself to cope with this surge of interest, insiders add. This has meant that smaller leaks, which might be of interest to people at a local level, are now being overlooked for the sake of big stories. [5]

According to the Al-Haqiqa sources, Assange met with Israeli officials in Geneva earlier this year and struck the secret deal. The Israel government, it seems, had somehow found out or expected that the documents to be leaked contained a large number of documents about the Israeli attacks on Lebanon and Gaza in 2006 and 2008-9 respectively. These documents, which are said to have originated mainly from the American embassies in Tel Aviv and Beirut, where removed and possibly destroyed by Assange, who is the only person who knows the password that can open these documents, the sources added.

Indeed, the published documents seem to have a ‘gap’ stretching over the period of July – September 2006, during which the 33-day Lebanon war took place. Is it possible that US diplomats and officials did not have any comments or information to exchange about this crucial event but spent their time ‘gossiping’ about every other ‘trivial’ Middle-Eastern matter?

Following the leak (and even before), Israeli prime minister Benjamin Netanyahu said in a press conference that Israel had “worked in advance” to limit any damage from leaks, adding that “no classified Israeli material was exposed by WikiLeaks.” [6] In an interview with the Time magazine around the same time, Assange praised Netanyahu as a hero of transparency and openness! [7]

According to another report [8], a left-leaning Lebanese newspaper had met with Assange twice and tried to negotiate a deal with him, offering “a big amount of money”, in order to get hold of documents concerning the 2006 war, particularly the minutes of a meeting held at the American embassy in Beirut on 24th July 2006, which is widely considered as a ‘war council’ meeting between American, Israeli and Lebanese parties that played a role in the war again Hizbullah and its allies. The documents the Al-Akhbar editors received, however, all date to 2008 onwards and do not contain “anything of value,” the sources confirm. This only goes to support the Israel deal allegations.

Finally, it might be worth pointing out that Assange might have done what he is alleged to have done in order protect himself and ensure that the leaked documents are published so as to expose the American hypocrisy, which he is said to be obsessed with “at the expense of more fundamental aims.”

Haaretz – WikiLeaks founder Julian Assange on Wednesday defended his disclosure of classified U.S. documents by singling out Prime Minister Benjamin Netanyahu as an example of a world leader who believes the publications will aid global diplomacy.

“We can see the Israeli Prime Minister [Benjamin] Netanyahu coming out with a very interesting statement that leaders should speak in public like they do in private whenever they can,” Assange told Time Magazine in an interview on Wednesday, days after his online whistleblower published thousands of secret diplomatic cables.

“He (Netanyahu) believes that the result of this publication, which makes the sentiments of many privately held beliefs public, are promising a pretty good [indecipherable] will lead to some kind of increase in the peace process in the Middle East and particularly in relation to Iran,” Assange said.

“I just noticed today Iran has agreed to nuclear talks. Maybe that’s coincidence or maybe it’s coming out of this process, but it’s certainly not being canceled by this process,” he added.

FOR A RECENT REVIEW OF THE WIKILEAKS CONTROVERSY, PRESS ME NOW